[UPDATE (January 24, 2019) : Please note that the far-right has declared their intention to attend the official, government-sponsored ‘Australia Day Parade’ in the city on January 26, and to use this as a springboard in order to disrupt the Invasion Day rally and march. The Parade is scheduled to take place from 11.00am to 11:45am along Swanston Street. Participation in the far-right assembly is being organised by the same folks who organised the anti-African rally at St Kilda Beach on January 5, and can reasonably be expected to attract the same crowd. Its chief promoter, Neil Erikson, will be hoping to antagonise participants in the Invasion Day event so as to film it and upload footage to his various Facebook pages, in a similar fashion to his successful attempt to antagonise African youth in St Kilda in the week prior to the St Kilda Beach rally and numerous other publicity stunts. Marshalls are aware of this possibility and it would be a shame if folks helped to gave him the attention he craves. Note also that Erikson will be joined by a number of other AltRight provocateurs who will have similar aims. These three documents contain the faces and names of a number of far-right activists who will likely be joining Erikson on the day, and in my view should be isolated and ignored wherever possible but whose presence it would be worthwhile alerting marshalls to if appropriate: JAN 26 a /// JAN 26 b /// JAN 26 c. *Please note that Kaylene O’Brien has disavowed any association with the True Blue Crew.] 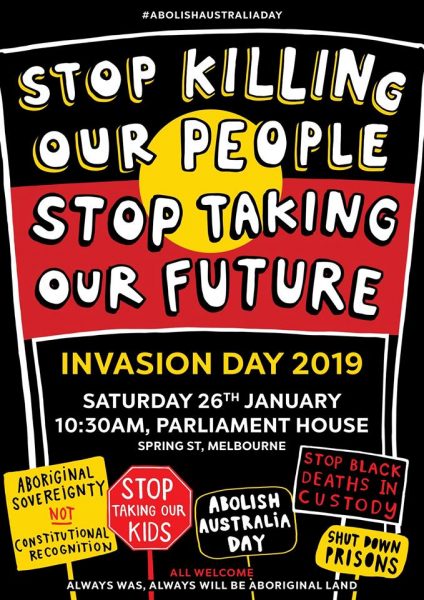 All media inquiries regarding the Melbourne/NarrmBirraranga event should be addressed to Warriors of the Aboriginal Resistance (WAR) : warnarrm [at] gmail [dot] com.

• The Australian Jewish Democratic Society (AJDS) and Jews against fascism have organised a Jewish bloc to participate in the rally. For more deets, pls see their event page: ‘We invite all Jewish people to join us in standing and walking in solidarity with Aboriginal and Torres Strait Islander people on Invasion Day, January 26, in proclaiming that sovereignty has never been ceded, and in celebrating Indigenous resistance, culture, history, and survival.’

• The AntiColonial Asian Alliance – Naarm/Melbourne will also have a presence on the day. ‘We are a group of Asian organisers looking to show visible and loud support for Aboriginal sovereignty and justice this invasion day. We aim to support the incredible ongoing work of Warriors of the Aboriginal Resistance – WAR and be accountable to the First Nations communities all around these lands who have never ceded their sovereignty and who face ongoing colonial state violence.’

• No Pride in Detention will also be marching. ‘No Pride in Invasion is the LGBTIQ contingent in the Invasion Day rally and expresses our community’s support for justice for Indigenous people. We invite all queer folks and their friends, families and allies to march in solidarity with our First Peoples. People of colour, Aboriginals and Torres Straight Islanders are especially welcome.’

• There’s a Greek & Balkan bloc too. ‘As Greeks living on stolen land, we acknowledge the sovereignty, culture and country of the Wurundjeri of the Kulin Nation, and all indigenous peoples of this continent. We give our respects to their elders and warriors past, present and emerging. We remember that their sovereignty of this land was never ceded, and that the struggles against colonialism in all its forms is continuing. As a migrant community our histories, cultures and traditions have converged with original communities throughout the short time we’ve existed side by side, and we will stand in solidarity with indigenous peoples on Invasion Day 2019, and welcome all within the Greek community in all it’s variances to march with us.’

• Oh, and a Muslim bloc: ‘We invite all Muslims who are able to join us on the 26th of January and march in solidarity with Aboriginal and Torres Strait Islander peoples, on whose lands we have the privilege of living …’

• Community radio station 3CR will be bringing youse news & views throughout the day.

• Events are also taking place in:

*I’ll add other events & locations as I become aware of them.*

I live in Melbourne, Australia. I like anarchy. I don't like nazis. I enjoy eating pizza and drinking beer. I barrack for the greatest football team on Earth: Collingwood Magpies. The 2023 premiership's a cakewalk for the good old Collingwood.
View all posts by @ndy →
This entry was posted in History, Media, State / Politics and tagged AntiColonial Asian Alliance - Naarm/Melbourne, Australian Jewish Democratic Society, Invasion Day, Jews against fascism, Muslims Say No To Australia Day, No Pride in Detention, Warriors of the Aboriginal Resistance. Bookmark the permalink.