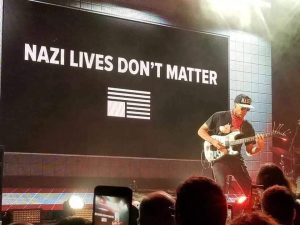 It’s been a while since I published some notes: about two-and-a-half months in fact. Inter alia, I suppose I could discuss how (anti-)social (corporate) media has destroyed the blogosphere, and maybe whine about how Facebook and Twitter are shit (as well as a somewhat necessary if radically-insufficient means of communication) but that’s very old news, so instead I’ll just reiterate I gotta Mastodon account and Carry On Blogging.

Australia’s No.1 Putin fanboy Simeon Boikov is in trouble with the law again, having been charged with assault occasioning bodily harm after encountering an elderly Ukrainian in Sydney. Apart from anything else, the incident has resulted in ‘The Aussie Cossack’ attending the Russian consulate in order to beg for political asylum.

In October, Tom Sewell‘s European Australian Movement (EAM)/National Socialist Network (NSN) held a rally in Moonee Ponds to protest a queer youth event, recently threatened to hold another in St Kilda, but in the end left it up to some Proud Boys/left wing feminists to raise the flag.

St Kilda is of course an olde stomping ground for The Lads. So, it was heartwarming to see Blair Cottrell back in court this week as one of several support persons to The Boy From Balwyn as he once again faced court for an alleged assault. (As it happens, Cottrell’s last formal appearance was in April when he himself got a slap on the wrist for assaulting Some Guy in a supermarket.) The EAM/NSN also appeared in an article in the Herald Sun after one of its investigative journalists uncovered the fact that they: use Telegram to publicise their activities; a child appears in a photo they used to document the fact that they held an event in Melbourne on December 3.

Apartheid Clyde has begun accelerating the banning of anti-fascist accounts on the bird site. Seemingly under instruction from a smol number of prominent right-wing propagandists and having already gotten rid of those meddling kids at CrimethInc, Space Karen has now terminated the account of It’s Going Down!. As the conrads write in It’s Going Down Suspended from Twitter as Billionaire Elon Musk Fulfills Far-Right Agenda (December 15, 2022):

Today, It’s Going Down (IGD), along with several other news and journalist accounts, was permanently suspended without warning or justification by billionaire owner of Twitter, Elon Musk. In the past several weeks, Musk has suspended anarchist, left-wing, and anti-fascist accounts known for reporting on both the far-Right and on Musk himself. In some cases, Musk has targeted accounts at the explicit request of Alt-Right trolls, many of whom Musk regularly consults and responds to. Now, following Musk’s viral humiliation in San Francisco, he seems determined to silence anyone who criticizes him.

See also : Canary in the Coal Mine: Twitter and the End of Social Media, CrimethInc, December 9, 2022.

A neo-Nazi group leader attacked the home of a prominent Black Lives Matter and Aboriginal activist due to his white-supremist [sic] ideological beliefs, a court has heard.

Desmond Liddington, 38, was expected to be sentenced on Tuesday but the case was adjourned to next year for the lawyer to prepare further material.

He has pleaded guilty to intimidation and affray over a terrifying incident involving Maxwell Ferrer and a third man at Padaric “Paddy” Gibson’s Arncliffe home on December 4 last year.

You may remember Desmond Liddington from such neo-Nazi groupuscules as Combat 18 (‘C18’ is tattooed on his right hand), but he’s described as the fuehrer of ‘Firm 22’ in the article. (In January 2014, Liddington was one of five men, along with Jacob Hort of the band ‘Indigenous Hate’, convicted of ‘criminal damage’ for distributing C18 propaganda in Perth.) Paddy Gibson, meanwhile, in addition to being a ‘Black Lives Matter and Aboriginal activist’ (?), is a bloody unAustralian Marxist.

Who won, I said, the election? Well, I may examine the results more closely at a later date but in the meantime: BAKER-PEARCE, Tylere came dead last in Narre Warren South, with just 290 votes (0.68%). Rebekah Spelman — whose BFF is partnered to local bonehead Scott McGuiness — contested the South-East Metropolitan region with the leader of the Freedom Party (FPV), Morgan C. Jonas. For their troubles (and no doubt much to #DictatorDan’s satisfaction), Spelman (a former United Australia Party candidate), Jonas and FPV got 8,338 votes (1.77%) in total. On a brighter note, the Grey Wolves will continue to enjoy having Adem Somyurek on their side in the Upper House.

The shooting deaths at Wieambilla have obviously sparked a good deal of discussion, especially in regards to the motivations of those responsible. I may write more later but in the meantime, as I wrote on the bird site …

… it’s weird seeing reportage on #freedumb stuff that’s been going on in the public eye for years as though it’s in any way, shape or form new or shocking and it very much reminds me of the effect of the Christchurch massacre. As in that case, state authorities are now confronted with having to wade through an absolute mountain of similarly batshit material in order to establish ‘motivation’ and ask what, if anything, distinguishes one man’s output from thousands of others of a fundamentally identical nature. If you think about it, this fact opens up the possibility of talking about the ideas espoused by these individuals as situated within a much larger and broader movement; one which finds expression not just on isolated farms, but in corridors of power, especially in media and politics.