A dozen or so masked neo-Nazis belonging to the ‘National Socialist Network’ (NSN) protested a queer-friendly youth event (YouthFest 2022!) in Moonee Ponds on Friday. Under the wise leadership of NSN fuehrer Tom Sewell and the protection of Victoria Police, the boys occupied a smol portion of the park for several hours before leaving around 4pm. Below are two accounts of how the afternoon unfolded:

Today a dozen members of the National Socialist Network protested the Moonee Ponds Youth Fest. Dressed in black and wearing masks, they held banners calling the drag performer headlining the event a demon and a paedophile. Victoria Police formed a line between the NSN and the community event and proceeded to facilitate their protest for the remaining three hours of the event.

When community members implored Moonee Ponds Council staff to “do something” about the neo-Nazis who were performing sieg-heils and snapping pics for social media, the staff members told members of the public that giving these fascists attention was letting them win.

While it was powerful to watch young queer musicians take the stage and play for the children and youths despite the neo-Nazi intimidation, it is a dangerous mistake to treat fascists like badly behaved children. These are adult men who practice a violent ideology and will use opportunities like children’s events to platform their beliefs.

These men are not badly behaved children who will run out of steam if everyone turns their backs. While people aren’t looking, they will take up more space and perform more escalatory acts, knowing that they can seed acts of violence and build a following in doing so. That was their intention in occupying the centre of today’s event in Moonee Ponds, and they were successful in their mission.

Despite the Council staff trying to calm concerned community members and convince everyone that inaction was the best response, a network of concerned queers and anti-fascists gathered and held banners and signs in response to the neo-Nazis. In attempting to counter the fascist presence, counter-protesters were implored to “think of the children” by members of Victoria Police. This was while neo-Nazis continued to jeer and sieg-heil while a young musician played. The counter-protesters continued to hold their ground regardless, and were thanked by parents and youth who appreciated people standing up to the NSN.

The response by Victoria Police today was an outrageous distortion of democracy. When community members approached Victoria Police to ask what their response would be, police officers said that the NSN were protesting peacefully and therefore were protected by the democratic right to protest. These men, wearing masks and sieg-heiling at children, were considered peaceful, considered to not be disrupting the peace. To position acts of fascism as within the bounds of democracy is to legalise hate.

Attending police officers eventually shifted the narrative to claim that the NSN were too dangerous to move off, and that they had to wait until enough reinforcements arrived to act on the fascist presence. When anti-fascists formed a line of counter-protest, however, more police officers appeared in an instant, to ensure that the fascist and anti-fascist groups could not interact with each other. Clearly Victoria Police could have acted if they wanted to, but it was too hard. Instead they opted to allow the NSN to intimidate a community event and beg anti-fascists to do nothing.

This is why we cannot rely on police to counter fascism effectively, as their priorities will always lie elsewhere. It is something of a fashion these days for the far-right to target drag and LGBTQIA+ events worldwide. Now more than ever we must look out for each other and stand up to fascism. Today was a reminder that the police and the state will inevitably find it easier to close their eyes and act as if nothing is happening.

Pretending that neo-Nazis are not standing right there will not make them go away. If your house is on fire it will burn down whether you shut your eyes or not. 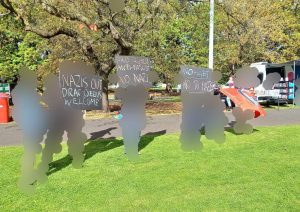 For the first hour and a half to two hours—there wasn’t an antifa contingent presence. But DJs trolled the nazis, as cops formed between the nazis and the festival. The confronting scene led at least one person to tears.

Queer antifa scrambled together and decided to do a symbolic counter protest. Security and cops told us to ignore them, as if their presence was not a threat against us. They tried to stop opposition, warning us it would ‘escalate’ the grotesque situation they had already escalated by facilitating the nazis as a ‘legitimate’ demonstration, and suggested if the nazi’s attacked us we were at fault.

By the end of the event towards 3:50pm when the nazis left, the counter protest was over double the size of the nazi presence. However, the nazis’ presence successfully led to the drag performer belial.bzaar not doing their performance.* There was a centrist sort of vibe from officials not wanting to directly call out the nazis from the mic.

Many people actively thanked us for our presence (even security who warned us against doing anything, by the end had come around). Some people said the event was on their radar as a cosmic right target, and was posted on some cooker social media, but they were surprised by the nazi presence, and noted nazis have been influenced by similar acts overseas.

It is worrying that nazis are brazenly targeting such public events and antifa networks have atrophied, unable to mobilise enough to push them out. Sky News was also present, eager to eat the nazi’s media bait (although only publishing one tweet).

Some questions coming out of the day. How can we build rapid response antifa networks and queer self-defence? How do we build solidarity across struggles, and win people over to see policing as reactionary along with (and connected to) the far-right? How would we challenge a situation that brought in other factions of the right and far-right?

Beyond this, like their kameraden in the United States and United Kingdom (and supplemented by some very ‘mainstream’ sources), local neo-Nazis have selected the trans community as an easy target for their bullying and intimidation, in this case young people (12–25). Whether or not this campaign targeting LGBTQIA+ events will continue remains to be seen, though it would make sense for organisers of future such events to give some thought to the prospect, and for anti-fascists to pay increased attention to them. 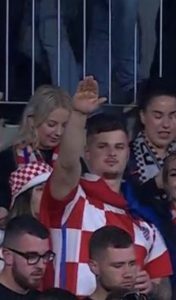 Macarthur played Sydney United 58 on Saturday night for the Australia Cup and, while the team lost 2–0, a segment of its fans won a public spotlight for their racist and fascist antics and, as a result, the cone of silence which surrounds its Ustasha-supporting fanbase may have finally been lifted.

It’s an open secret that segments of the Croatian community in Australia pine for a return to and the re-establishment of the Nazi-era ‘Independent State of Croatia’, a defunct political entity responsible for horrific crimes:

After seizing power, the Ustaša authorities erected numerous concentration camps in Croatia between 1941 and 1945. These camps were used to isolate and murder Jews, Serbs, Roma (also known as Gypsies), and other non-Catholic minorities, as well as Croatian political and religious opponents of the regime. The largest of these centers was the Jasenovac complex, a string of five camps on the bank of the Sava River, about 60 miles south of Zagreb. It is presently estimated that the Ustaša regime murdered between 77,000 and 99,000 people in Jasenovac between 1941 and 1945.

The continuity between the mass killers of World War II and the younger generation of Ustaše supporters was illustrated when Serbian dictator Slobodan Milošević [1941–2006] launched the Bosnian and Croatian wars in the early 1990s. Indeed, many Australian Ustaše militants welcomed this opportunity to settle scores with the Serbs and help build a new fascist Croatian state. The younger generation showed that it, too, could display fanatical support for Ustaše principles … [T]here is strong evidence that some of these younger militants travelled to Croatia in the 1990s and joined paramilitary units that carried out war crimes against both Serbs and Bosnian Muslims. Like their fathers and grandfathers before them, they appear to have found sanctuary from investigation, let alone justice, following their return to Australia. This is, of course, the legacy bequeathed by successive Australian governments — both Labor and Liberal — in admitting and then protecting Croatian Nazis against the best advice of the Director General of Security, W.B. Simpson, who in 1944 predicted with remarkable foresight events which would unfold over the next fifty years.

For a more recent account of Ustasha activities in Australia, see : In Australia, Some Croats Openly Celebrate Fascism, Seb Starcevic, Balkan Insight, September 10, 2019 (‘As Croatia struggles with fascist nostalgia and historical revisionism, thousands of miles away in Australia, the Croatian community openly celebrates its Ustasa links’). For an overview of Croatian ultra-nationalism during the Cold War, see : Croatian Radical Separatism and Diaspora Terrorism During the Cold War, Mate Nikola Tokić, Purdue University Press, 2020 (‘In Australia alone, Croatian separatists carried out no less than sixty-five significant acts of violence in one ten-year period. Diaspora Croats developed one of the most far-reaching terrorist networks of the Cold War and, in total, committed on average one act of terror every five weeks worldwide between 1962 and 1980.’). Finally, note that the forthcoming volume Histories of Fascism and Anti-Fascism in Australia, Evan Smith, Jayne Persian and Vashti Jane Fox (eds.) (Routledge, 2022) includes a chapter by Drew Cottle and Angela Keys on ‘Fascism in Exile: Ustasha-Linked Organisations in Australia’.