[Update (September 1, 2020) : BadEmpanada has published a vid (August 30) titled ‘Why Friendlyjordies and Labor Are Attacking the AUWU’; Hamish Taylor has published an extract from a Friendly vid in which Jordan downplays an alleged sexual assault by former NSW Labor leader Luke Foley.] 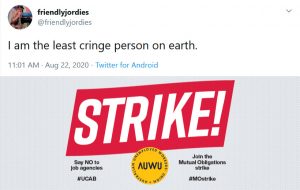 To which Jordan replied: [email protected] called @ScottMorrisonMP a simp… and pissed off gross ex buzzfeed hacks whilst doing it. He would make a great PM… oh yeah and he designed the NDIS.

Over the course of the next day or two, Things Escalated, with Jordan’s hostility to various other meeja sheeted home to a supposed rejection by SBS — a claim Jordan denies. In any event, Jordan offered some further thoughts on the AUWU in a podcast (August 23), and finally promised to fully expose the union in a subsequent video.

In terms of the podcast, Jordan claimed that inter alia he’d privately conferred with Bill Shorten staffers about the AUWU, reckoned that the AUWU has pushed out good comrades from the union movement and claimed that leading AUWU members enjoy many privileges, come from wealth, and enjoy a wealthy and well-fed lifestyle as a result of their involvement in the group.

In his subsequent ‘Apology’ on YouTube (August 28), Jordan elaborates on why the AUWU is bAd, corrupt, not-a-union, and best abandoned by its membership. Below is an account of the main allegations he makes in the video. Note that some details (available in the original video) have been omitted, the reasons for which should become clearer upon reading.

To begin with, Jordan highlights the fact that — despite having supported the AUWU by MCing and speaking at several of their events in 2016 — Van Badham was subsequently denounced on Twitter by Thomas Studans, the NSW co-ordinator for the AUWU. So too Emma Dawson, who co-authored a submission to a Senate inquiry into employment services by the AUWU and her organisation Per Capita in 2018 (see : ‘Working It Out: Employment Services in Australia’, AUWU & Per Capita, September 2018).

Secondly, Jordan makes claims based on grievances aired by a former President of the AUWU, Hayden Patterson. The other person named in his video, Imogen Bunting, was allegedly expelled in order to prevent her from regaining office as the secretary of the Brisbane branch of the AUWU.

Thirdly, Jordan contrasts the claim by the AUWU that it has thousands of members with the fact that as an incorporated association it claims just 42. Further, as the union is not affiliated to the Australian Council of Trade Unions (ACTU), it cannot be considered a ‘real’ union. Finally, Jordan reckons that the fact that the last annual report — showing that the AUWU had a budget surplus of approximately $30,000 — is evidence of hypocrisy and moral corruption on the part of the group: a ‘union’ that had real concern for starving workers simply wouldn’t have such a massive surplus. For this reason, he describes AUWU member Jeremy Poxon as ‘a monumentally hypocritical piece of shit’ given his authorship of an article in Junkee in May 2019 titled ‘What Good Are Billions Of Surplus Dollars When People Are Starving?’.

After some further unkind commentary, Jordan draws attention to a number of other tweets by Studans, including one in which, in response to comments about an increase in applications for bridging visas (“Why has the minister allowed for the large blowout in bridging visas and airplane people under his watch?” Senator Keneally asked in the Senate on Tuesday), he accuses Kristina Keneally of being a ‘dog-whistling racist piece of sh*t loser’. In some other tweets, Studans uses the term ‘n*gga’ (seemingly in reference to various hip-hop lyrics).

Fourthly, Jordan cites an un-named person who alleges that the AUWU leadership made a number of serious and unfounded allegations against her, such that, inter alia, her job was put at risk. Further, more recently, Thomas (or ‘the AUWU leadership’ in Jordan’s terms) accused another Twitter user of being a ‘pedo’. Jordan also accuses the AUWU of doing the same thing to him on one of his (other) social media platforms.

Next, Jordan provides an account of the AUWU helpline and its apparent failings. Thus Jordan claims that Hayden stated to him that the first call he received when operating the helpline was from a woman in severe distress. According to Jordan, Hayden then attempted to have the helpline shut down, but was over-ruled. Subsequently, many calls went un-answered, generating a months-long backlog, and contributing to a tragic outcome for one caller. Note that, according to the AUWU’s 2018–2019 annual report:

[In April 2019, there] was a backlog of callbacks and emails dating back to September 2018. Thanks to the enormous efforts of both Tracey and Owen Bennett (among other advocacy volunteers), every single email, form, or voicemail was followed up on and apologies were ensured. From then on, the new Advocacy Working Group team (Tracey, Gene Saraci as Online Advocacy Coordinator, and other advocates) have ushered in a new era for AUWU advocacy services and have done so with a degree of professionalism and energy that any AUWU member would be proud of.

Jordan further claims that he received many accounts of bad behaviour by the AUWU from anonymous sources too scared to go public, their anonymity ensuring that they can avoid the prospect of (another) campaign of ‘savage and targeted harassment’ by the AUWU leadership. According to Jordan, this ‘destructive abuse’ has, in fact, ‘been orchestrated by Alex North, Jeremy Poxon, Owen Bennett and Thomas Studans’.

The main target of Jordan’s apology is Thomas Studans, who according to Jordan has unfairly attacked and smeared a number of people on Twitter. Two sources are named: Imogen Bunting and Hayden Patterson; other sources remain anonymous. The AUWU is not a union, but rather a corrupt, un-democratic gang responsible for seriously harming others.

The AUWU gang has yet to formally respond to Mr Friendly.

These guys are the union for the unemployed. Who are they demanding rights from?

Leaving aside the more specific allegations about the AUWU made by Jordan, it’s worth asking: what’s a union?

The single most important criteria, according to Jordan, is whether or not a group is affiliated to the ACTU. All appearances to the contrary, the Retail And Fast Food Workers’ Union (RAFFWU) is therefore not a union. Rather, like the AUWU, it’s a ‘corporation’. Nonetheless, the RAFFWU has been dubbed a ‘rogue’ union by Clayton Utz, which notes with concern the possible emergence of similar organisations, ones which might challenge ‘traditional unions’ (in this context the SDA). In any case, the licensing of unions by the state can be a powerful weapon against worker organising and industrial militancy, including by Labor governments: the de-registration of the Builders Labourers’ Federation in 1986 and that of the Australian Federation of Air Pilots (AFAP) in 1989 being recent examples.

Of course, a more expansive definition of ‘union’ would obviously include not only bodies not affiliated to the ACTU, but also those not formed on the basis of a particular trade or industry. The Union of Australian Women, for example, describes itself as follows:

We are workers, wives, care givers, mothers, cleaners, cooks, gardeners, chauffeurs and much more. We do the vast majority of unpaid work. We are particularly badly affected by health, education, social security, aged care and housing cuts. We are badly impacted by the industrial changes. We are being attacked by State and Federal governments.

In the same camp could be placed squatters’ and tenants unions, and a range of other economic, political and social organisations.

Regardless of the varied definitions and levels of success or failure, unemployed movements faced severe obstacles such as:

1) The indifference of much of the trade union movement. Dominated by laborist views which emphasize the wages and working conditions of wage and salary earners rather than a broader redistribution of income that alters the basic structural inequities between rich and poor, Australian unions have historically displayed little interest in the protection of those outside the workforce. During the depression, the union movement, whilst expressing sympathy for the unemployed, with some exceptions, generally made little attempt to organize the unemployed or to lobby on their behalf for adequate unemployment relief. As noted by historian, L.J.Louis, unemployed workers quickly became isolated from the mainstream union movement. Union ambivalence or outright hostility also tended to be the case elsewhere.

2) The psychological impact of unemployment which left many individual workers isolated and demoralized.

3) The inability of the politically powerless unemployed to initiate economic sanctions such as strikes to win their demands.

Broadly speaking, in 2020 indifference (1) remains the position of the trade union movement in Australia, leavened by occasional expressions of sympathy and support. By the same token, even as union membership has plummeted over the last few decades, and industrial militancy has all but vanished, a more expansive definition of the purposes of trade unions — sometimes dubbed ‘social unionism’ in the Anglophone worlde — is also largely absent. Leaving aside the brief heyday of the Wobblies and some Communist-controlled unions, in the post-WWII era those unions which have adopted a progressive agenda and attempted to intervene in broader social issues have generally been the more radical, with the NSW Builders Labourers’ Federation of the 1960s and ’70s probably being the best and most recent example. Changing such attitudes, policies and perspectives is no easy thing, but unions of the unemployed can at least support their members, and by doing so mitigate the negative psychological impact (2) capital imposes upon this segment of the labour market in particular. Strike action (3) too, is possible, but is likely to succeed only with broader public support. As for political violence and repression (4), that’s surplus to requirements at present, and assumes far more subtle forms than it did in, say, the 1920s and ’30s.

I live in Melbourne, Australia. I like anarchy. I don't like nazis. I enjoy eating pizza and drinking beer. I barrack for the greatest football team on Earth: Collingwood Magpies. The 2021 premiership's a cakewalk for the good old Collingwood.
View all posts by @ndy →
This entry was posted in Media, State / Politics, That's Capitalism! and tagged Australian Unemployed Workers' Union, AUWU, Friendly Jordies, Jordan Shanks. Bookmark the permalink.