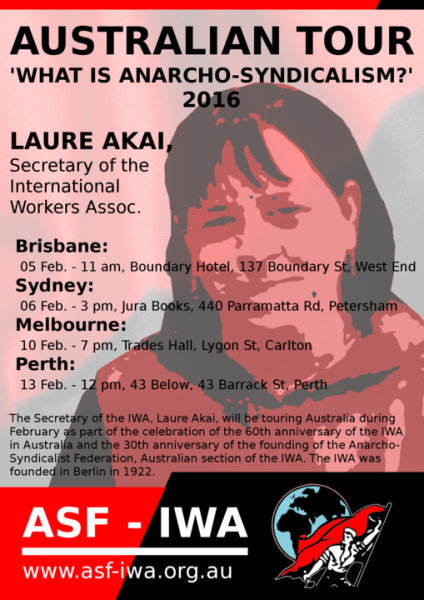 Laure Akai, secretary of the International Workers Association (IWA), will be giving a presentation on the practice of anarcho-syndicalism this month. The IWA was founded in 1922 in Berlin and has sections around the world. The series of events around Australia is being organised by the Anarcho-Syndicalist Federation (ASF), the Australian section of the IWA.

I live in Melbourne, Australia. I like anarchy. I don't like nazis. I enjoy eating pizza and drinking beer. I barrack for the greatest football team on Earth: Collingwood Magpies. The 2023 premiership's a cakewalk for the good old Collingwood.
View all posts by @ndy →
This entry was posted in Anarchism, History, State / Politics, That's Capitalism! and tagged anarcho-syndicalism, Anarcho-Syndicalist Federation, ASF-IWA, IWA, Laure Akai. Bookmark the permalink.

3 Responses to “What is anarcho-syndicalism?” : ASF-IWA Australian speaking tour : February 2016