The keyboard warriors of the United Patriots Front (UPF) have been experiencing some technical difficulties on Facebook of late.

Ruh-roh. Poor old Facebook Patriots. Previously a ‘safe space’ for flag-waving twats, a few weeks ago the UPF Western Australia page was unpublished and then, a week or so ago, the UPF media page — which mostly published fanboy material and dank neo-Nazi memes — was unpublished. Finally, in the last day or two, the main UPF page, which had attracted over 120,000 ‘Likes’, has also been given the boot. Presumably, the UPF, which in terms of its public presentations has been reduced to two neo-Nazis in Melbourne (fuehrer Blair Cottrell and his sidekick Thomas Sewell) and one of their boofhead mates in Perth (Dennis Huts), will carry on as before, publishing new Facebook pages, and continuing to whinge and whine about bloody Muslims, rotten Communists, and African migrants. (Note that the UPF QLD page and UPF Bendigo pages remain up and running.)

As their principal means of communication with the Australian and, increasingly, American public, Facebook has been absolutely critical to the popularisation of the UPF and, moreover, its neo-Nazi leader Cottrell. Thus despite declaring, on more than one occasion, that accumulating Facebook ‘Likes’ was not the main goal of the UPF, after hitting peak derp in Bendigo in October 2015, its ‘Likes’ appear to have risen in inverse proportion to its ability to actually draw a crowd: the last UPF rally in Melbourne in November 2015 attracted barely a few dozen supporters, while the campaign to launch their political party ‘Fortitude’ in February 2016 was a complete fail. Since that time, most of their activity has been dedicated to circulating fake news and propaganda on Facebook, organising media and publicity stunts and, most recently, celebrating Hitler’s birthday at a local German restaurant.

*Ralph Cerminara‘s Facebook page ‘Left Wing Bigots & Extremists Exposed’ also appears to have been unpublished.
**Fuehrer Cottrell, along with ex-UPF members Chris Shortis (Australia First Party) and Neil Erikson, are due back in court on May 23 to face charges of serious religious vilification, defacing property, willful damage and behaving in an offensive manner in public following a UPF publicity stunt outside Bendigo council offices in October 2015.

For reasons best known to themselves, the Sydney-based arm of ‘Reclaim Australia’ has cancelled its proposed rally in Melbourne on June 12. Undeterred, the True Blue Crew (TBC) has organised a flagwit rally in Melbourne on June 25. Last year’s flagwit rally attracted around 100 or so participants, the TBC busing in several score supporters from Bendigo and Melton, their numbers supplemented by Christian fundamentalists belonging to Catch The Fire Ministries (AKA ‘Rise Up Australia Party’), a small group of whom used the occasion to engage in the traditional Australian practice of a haka (presumably in honour of their Pope, Sri Lankan migrant Reverend Daniel Nalliah). Also joining the TBC on the day was one of their most vocal supporters, alleged ‘terrorist’ Phillip Galea. Appearing on April 28, Galea ‘told a court he won’t be using mental health as a defence’, and will be back in court sometime in August for a committal hearing. 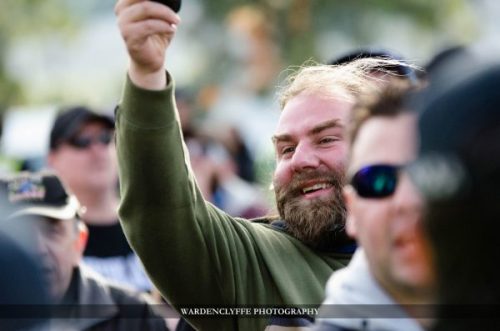 Above : Phill Galea in happier times at the TBC flag rally, June 2016; just a few weeks later, he was arrested and charged with terrorisms.

“Mastika? We thought it said swastika!” 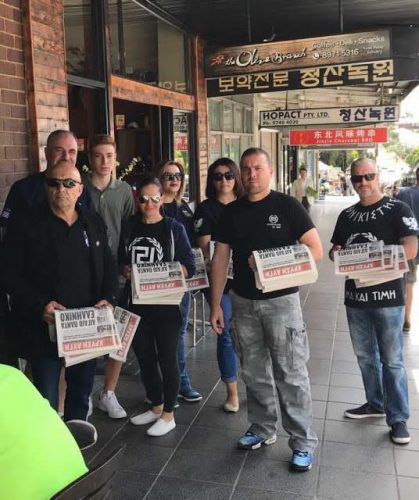 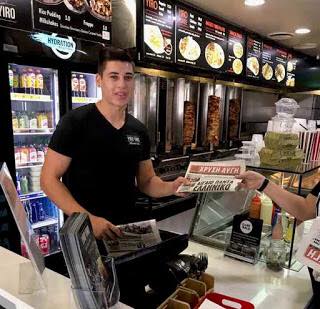 Greek neo-Nazi party Golden Dawn (GD) is in all sorts of legal trouble in Greece, but in Australia is trying hard to move from the margins of Greek cultural and political life into its centre. Recently, a small group of GD members went on a publicity tour of Belmore in Sydney; the group then posted pictures of themselves distributing the Golden Dawn newspaper, including to two cafe workers at Mastika, who seemed quite happy to be receiving neo-Nazi propaganda. For its part, the cafe has disavowed any affiliation to or support for neo-Nazi politics. (It’s also closed its Facebook page.)

A few weeks ago, Nathaniel Jacob Sassoon Sykes was revealed as being a member of the (White) Australia First Party, Jewish, and a contributor to the world’s leading neo-Nazi website Daily Stormer. From this vantage point, Sykes tried his best to crank up The Internet Hate Machine and to direct it at various Australian public figures to whom he’d taken a particular dislike; a tricksy neo-Nazi, Sykes assumed the nom de guerre of ‘Hamish Patton’ while crafting his tasty insults. One of Sykes’ earliest targets was Muslim lawyer Mariam Veiszadeh, whom he lovingly described as a ‘towel-headed halal-harpy’ and a ‘country-shopping daughter of a goat-herding family of conniving peasant trash from the dunghills of Kabul’. Hurr hurr. In an article titled Waaambulance Please! Mariam Isn’t Happy! These Feels! and published on the Daily Stormer site on March 11, 2015, Sykes went into bat for a Queensland woman called Jay-Leighsha Bauman, who on that date appeared in Ipswich Magistrates Court ‘charged with using a carriage service to menace, harass or cause offence’:

The charges stem from an alleged online hate campaign she directed at human rights activist Mariam Veiszadeh in early January [2015].

The allegedly expletive laden, anti-Islam campaign by Ms Bauman was unleashed on Ms Veiszadeh’s personal Facebook page, where police will allege she referred to the human rights activist as a whore, a prostitute and a rag-head and urged her to return to her “sand dune country”.

Later that month, Bauman was convicted and sentenced to 180 hours of community service.

Sykes’ Waaambulance article called upon the neo-Nazi readership of Daily Stormer to rally behind Bauman and boasted of the campaign’s success in being featured on ABC’s Lateline (Hate groups launch global attack on Muslim advocate, March 10, 2015). Perhaps wanting to avoid any legal repercussions for himself, however, at some point between March 11 and April 3, 2015, the authorship of the article was changed from ‘Nathan Sykes’ to ‘Hamish Patton’. 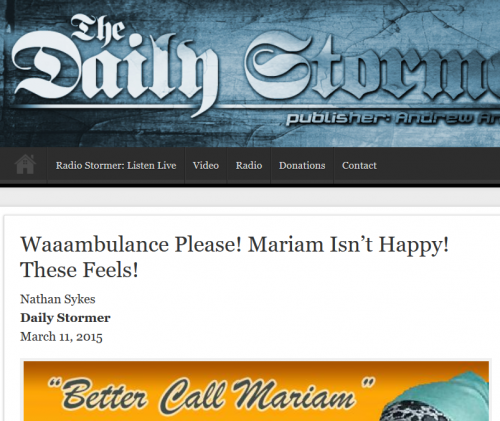 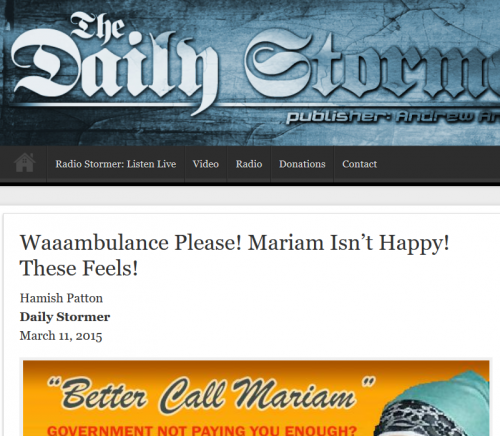