About a month ago (August 28), I was informed by Facebook that my page had once again been un-published. Yesterday, it was restored. 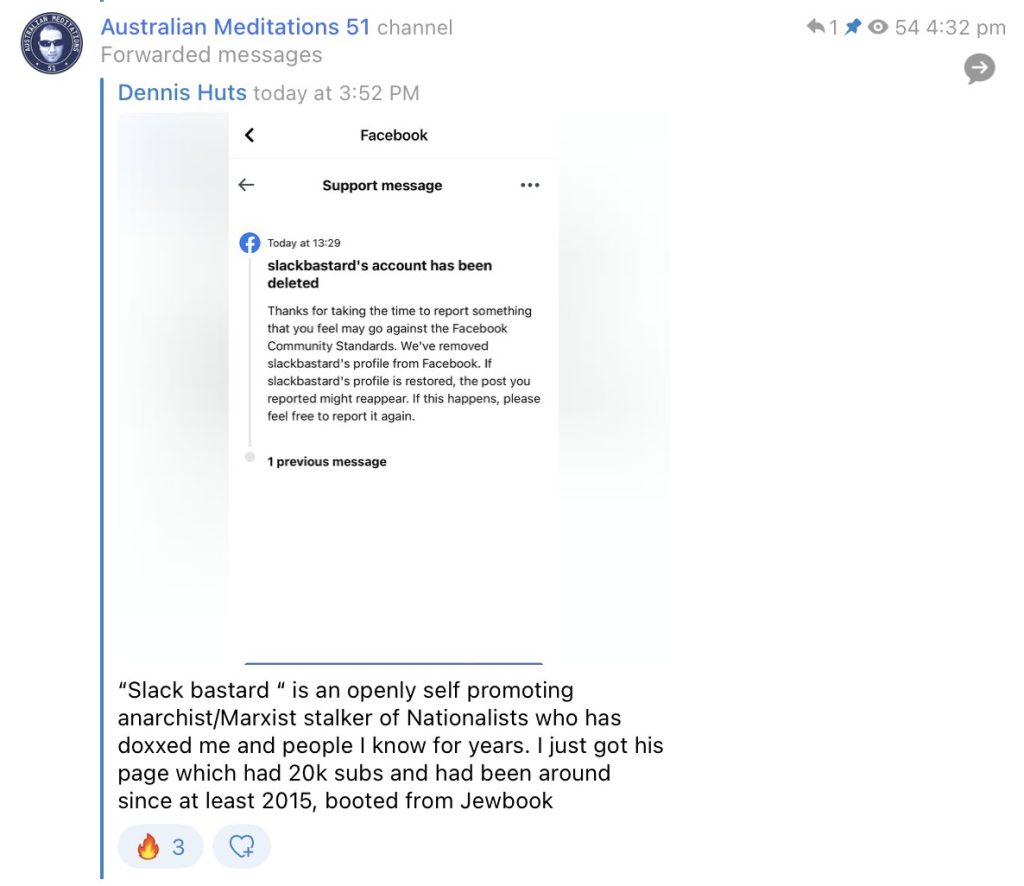 As indicated above, responsibility/credit for the deletion was assumed by Dennis Huts, a Perth-based member of the defunct ‘United Patriots Front’ (UPF); the UPF’s own presence on ‘Jewbook’ was terminated in mid-2017 (at which point it had accumulated well over 120,000 likes and follows to spread racist and fascist propaganda to).

Further, as The Intercept reported on October 21 last year, the UPF was one of over 4,000 entities that Facebook later designated ‘Dangerous Individuals and Organizations’ (DIO); inclusion on the blacklist means references to DIO are censored and users risk being penalised as a result.

In which context, I suppose it’s worth noting that, despite being a member of a DIO, Huts was and, presumably, remains free to harness Facebook to have content critical of fascist activism removed from it.

Finally, ‘Australian Meditations 51’ is Stefan Eracelous, a Melbourne-based neo-Nazi whose most recent brush with fame was allegedly extorting $651 from The Irish Times Pub; the ’51’ is a reference to the number of Muslims the Christchurch killer murdered, an act which neo-Nazis celebrate and memeify. Earlier this year, Eracelous was also responsible for an Invasion Day stunt in which he and a handful of his neo-Nazi comrades burned the Aboriginal flag:

The video was poorly filmed and produced, reeking of a desperate effort to gain publicity and followers for a new extremist group.

Yet it began to gain traction with mainstream news outlets, largely because it singled out Greens senator Lidia Thorpe, who is also Indigenous. The senator’s name, alongside a vicious racist slur, was written on a sign behind the men. Soon, terror experts were warning of the potential for the video to incite attacks or further harassment of Thorpe, a development the anonymous neo-Nazi propagandist who uploaded the video greeted with glee in subsequent online postings.

Note that Thorpe’s intransigent anti-colonialism has most recently found expression by way of her refusal to accord the ‘National Day of Mourning for Her Majesty The Queen’ sufficient respecc (see : Don’t ask me to give the Queen a minute’s silence, ask me for the truth about British colonialism, The Guardian, September 14, 2022), and she remains a regular target of neo-Nazi and racist ire.

I live in Melbourne, Australia. I like anarchy. I don't like nazis. I enjoy eating pizza and drinking beer. I barrack for the greatest football team on Earth: Collingwood Magpies. The 2023 premiership's a cakewalk for the good old Collingwood.
View all posts by @ndy →
This entry was posted in Anti-fascism, Media, State / Politics, War on Terror and tagged Bloggy, Dennis Huts, Facebook, Lidia Thorpe, slackbastard, Stefan Eracleous, United Patriots Front. Bookmark the permalink.