I’ve unpublished my Facebook page for the time being. This follows my having published a post containing words and/or images the corporation has designated as expressing support for ‘dangerous individuals or organisations’; the ‘dangerous individual’ in this case possibly being convicted racist Neil Erikson. Or, possibly (but likely not), an image containing Erikson and several others (including Andrew Nolch) making the ‘OK’ gesture. Thus: 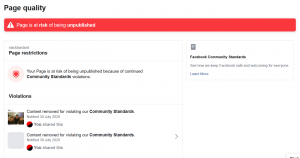 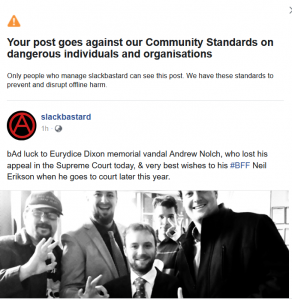 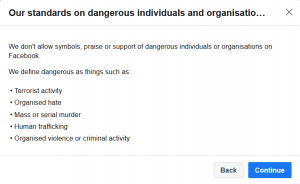 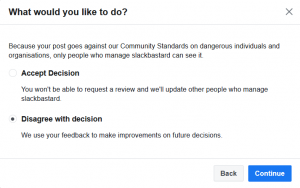 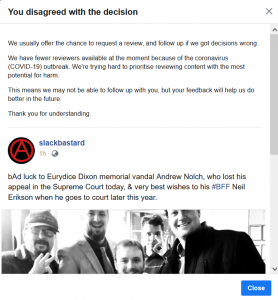 For those of you coming in late … I published these images in response to a Supreme Court decision yesterday ([2020] VSCA 195) dismissing an appeal by Andrew Nolch against a sentence imposed upon him for vandalising the memorial to Eurydice Dixon. The vandalism was celebrated by some of Nolch’s frens, including Erikson, who in November 2018 accompanied Nolch to court to support his appeal against his original conviction and sentencing (and also claimed to be providing Nolch with legal advice). As yesterday’s judgement puts it: For reasons that are by no means apparent, the applicant appealed the sentence imposed by the magistrate to the County Court. As suggested by the Court in argument, this was an act of sheer stupidity on his part.

The stoopid is, of course, relentless: Nolch is now in prison to serve a five months sentence while Erikson — having previously been convicted of, inter alia, stalking a rabbi and racial vilification — heads back to court later this year to face charges of having disrupted (along with YouTube sensation Claudia Benitez AKA ‘Dia Beltran’) a Christian religious meeting in Hawthorn and a Muslim prayer service in Federation Square. (A warrant for his arrest has been issued in NSW for having also allegedly disrupted a Christian prayer service in Gosford.)

Back to the judgement:

The crime of damaging property can be committed for a variety of reasons, including revenge or unthinking vandalism. In the present case, it is clear that the applicant’s was a calculated and deliberate act designed to cause great offence, annoyance and hurt to the community at large. So much increases the objective gravity of his offending. Thus, in his record on interview, when asked his ‘motivation’, he said:

I wanted to see if it could make the news. I wanted to –I –I basically wanted to see a giant dick –them report a giant dick on –in a news report, pretty much, I just thought it would be funny to be like, ‘Memorial vandalised with giant dick’, and then, like, just to see the dick on the screen, I just thought that’d be funny. I sort of wanted to see if I could do it, like, if I could, like, break the law. … And I kinda wanted to annoy feminists, like, I wanted –like, I –I have nothing against the –the person who passed away and their family, like, I don’t even know ‘em, so it’s, like, if they got offended and stuff it’s, like –I -look, I –I didn’t wanna offend them, like, I –I just –like, I just thought that would have to come with doing the graffiti, you know what I mean…. And so –so, yeah, I just wanted feminists to be like, ‘Oh, some guy drew a big dick, oh, what the hell?’ just –like, it was just, like, a –a troll sort of thing and —…To annoy them. But it is kinda weird ‘cause, like, I don’t really like feminists and stuff and I thought this before I did it, I was 1ike, ‘Well, this is gunna annoy them and make them even more think that the crime was a man hating thing’, and I was kinda like, ‘What am I even doing this?’ you know what I mean, but something just made me wanna do it and see if I can do it and –yeah.

In our view, apart from the plea of guilty and its purely utilitarian benefit, save for his lack of prior convictions there was little to mitigate the applicant’s original offending, which, given his motives, was an objectively serious example of the offence of damaging property.

Speaking of male supremacy, an upcoming episode of Yeah Nah Pasaran! features an interview with Alex DiBranco, the executive director of The Institute for Research on Male Supremacism.