Nazi Trouble at The Irish Times Pub in Melbourne

The Irish Times Pub in Melbourne has inadvertently become the centre of a trans-national campaign in support of a small handful of local neo-Nazis and the site of an alleged exortion:

A Melbourne publican claims a neo-Nazi extorted hundreds of dollars from him after a staff member recognised a far-right tattoo [a sonnenrad] on the shoulder of a patron and spat in their drink.

The neo-Nazi members have been bragging on secret and encrypted social media channels populated with right-wing supporters that The Irish Times Pub manager … handed over $651 after they threatened the pub with complaints to regulators and flooded Google with negative reviews.

Magistrate David Starvaggi told Roberts he avoided jail by “an absolute whisker”, and ordered he complete an 18-month community correction order. He said he would have jailed Roberts had he not pleaded guilty. “This is one of the most disgusting, vile, repugnant acts of anti-Semitism and racial behaviour that I have ever seen,” Starvaggi said.

Erikson is a veteran neo-Nazi serial pest who is currently appealing a jail sentence for disrupting a church service (Churchgoers ‘traumatised by Erikson abuse’, Emily Woods, The Canberra Times, August 2, 2022):

Parishioners at a queer-friendly Melbourne church refuse to go back inside a room where far-right extremist Neil Erikson spouted homophobic abuse three years ago. Erikson crashed a Mother’s Day service at the Metropolitan Community Church in Hawthorn in May 2019 with two women, live-streaming the ordeal to his followers online. A few minutes after a bible discussion began, Erikson got up from his seat and, while standing in front of about 20 parishioners, asked: “Does your church marry Sodomites?” He hurled further abuse, including “you’re not Christians you’re a bunch of “fa***ts”.

Eracleous is another relative veteran, gaining a smol degree of notoriety recently for burning the Aboriginal flag in a propaganda video (Neo-Nazi unmasked as former Young Liberal, Nick McKenzie, The Age, February 2, 2022) which:

… began to gain traction with mainstream news outlets, largely because it singled out Greens senator Lidia Thorpe, who is also Indigenous. The senator’s name, alongside a vicious racist slur, was written on a sign behind the men.

The neo-Nazis have spent considerable time and energy since the incident on August 2 organising in defence of Eracleous, Erikson and Roberts, inter alia encouraging their supporters in Australia and overseas (especially Ukraine) to flood the pub’s socials with negative reviews: an interesting case study in cross-national campaigning by neo-Nazis on Telegram.

No doubt there will be continuing fallout from the incident and the neo-Nazi response to it, and I hope that anti-fascists in Melbourne and elsewhere continue to pay close attention to their antics. 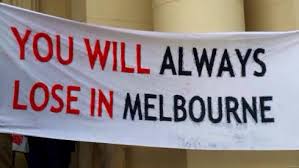 I live in Melbourne, Australia. I like anarchy. I don't like nazis. I enjoy eating pizza and drinking beer. I barrack for the greatest football team on Earth: Collingwood Magpies. The 2023 premiership's a cakewalk for the good old Collingwood.
View all posts by @ndy →
This entry was posted in Anti-fascism, Media, State / Politics, That's Capitalism!, War on Terror and tagged Christchurch, Jimeone Roberts, National Socialist Network, Neil Erikson, Stefan Eracleous, The Irish Times Pub. Bookmark the permalink.