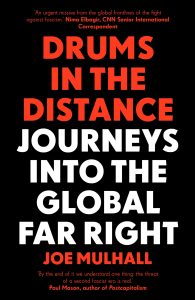 On this week’s episode of Yeah Nah Pasaran! on 3CR we talk to Joe Mulhall [Twitter]. Joe is Director of Research at Hope not hate and the author of Drums in the Distance: Journeys into the Global Far Right (Icon Books, 2021):

A terrifying and timely look at the spread of far-right movements across the globe.

Joe Mulhall knows what it’s like to stare fascism in the face. For a decade, often undercover at significant personal risk, he has investigated hate groups.

He infiltrated a US white supremacist militia, set up a fake Ku Klux Klan branch, has been on countless street marches with violent far-right groups across Europe, and got inside some of the most important ‘alt-right’ meetings ever held. Brazil, India and the US are still in thrall to authoritarian populism, and far-right views have become steadily normalised in mainstream politics. Mulhall’s dramatic experiences on the front line of anti-fascist activism, coupled with his academic research, clearly explain the roots of both elected and non-elected far-right movements across the globe. Above all, he concludes, the far right should not be dehumanised – they are normal people, but with dangerous beliefs that can be defeated.

I live in Melbourne, Australia. I like anarchy. I don't like nazis. I enjoy eating pizza and drinking beer. I barrack for the greatest football team on Earth: Collingwood Magpies. The 2023 premiership's a cakewalk for the good old Collingwood.
View all posts by @ndy →
This entry was posted in Anti-fascism, Broken Windows, Death, History, Media, State / Politics, Student movement, Television, That's Capitalism!, War on Terror and tagged 3CR, Drums In The Distance, Drums In The Distance: Journeys Into the Global Far Right, Hope Not Hate, Joe Mulhall, Yeah Nah Pasaran. Bookmark the permalink.