Over the course of the last day or two, a number of questions have been posed regarding a website and self-proclaimed anarcha-feminist collective, seemingly based in the US, called the ‘New Wave Army’ (NWA), for which Twitter user ‘@AnarchyMami’ (joined November 2016) served as chief booster, and is claimed to be its founder. I’ve looked, but despite declaring that it came into existence in 2002, traces of its activities over that period are virtually nil. The NWA website — newwavearmy.org (created August 25, 2015) — does note that the co-founder of NWA (whether ‘AnarchyMami’ or some other person) established something called ‘Arm The Homeless’ (ATH), also in 2002. Again, I can find little trace of ATH, although it is documented that in the early 1990s a hoax using that name was conducted (and of course there’s Tom Morello). 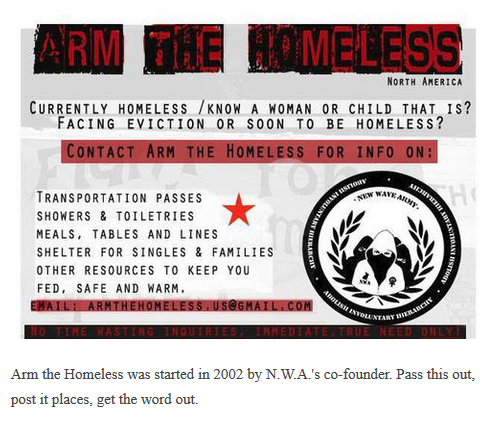 Note that, according to the NWA website, this project to ‘arm the homeless’ is one of many proclaimed activities on the part of NWA, including: ‘Operation Orange Crush’ (‘NWA Antifa Network comes together under Operation Orange Crush’); ‘Operation Blowhard’ (‘a media swarm and adbusters campaign aimed at talking heads’); offering ‘pre-membership’ courses and training and; ‘OpValentine’ (‘part of the ongoing Letters to Prisoners campaign’). Interested parties are also invited to ‘join NWA in South Carolina as we face the KKK in #OpHoodsOff’. Finally, NWA was also soliciting donations for some thing called the ‘New Wave Army & Natives With Achievements Winter Caravan’ (which was allegedly to take part in the #NoDAPL camp at Standing Rock) and was even organising a trip to Chiapas, possibly under the auspices of another (derelict) website ‘AnarchyMami’ linked to (brigadadesolidaridad.org, created April 22, 2017). Almost all these activities are accompanied by calls for donations/financial assistance. Joining in the call for $ is (was) another organisation founded in 2015 called ‘A Woman’s Worth, Inc.’, which would appear to be an NGO for which ‘AnarchyMami’ serves as ‘Founder and Executive Director’: 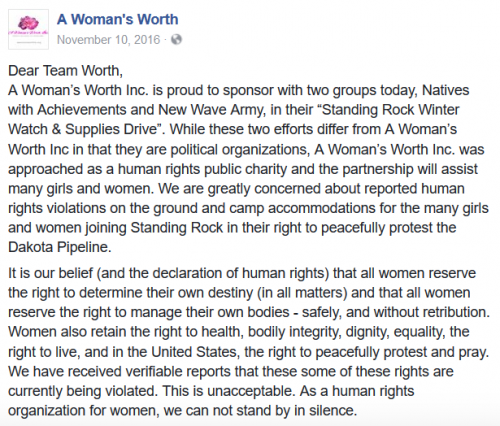 In November 2016, however, NWA, along with scores of other groups, did lend its name to a call to #DisruptJ20 (January 20, 2017 being the date of El Presidente Trump‘s inauguration). The inauguration did witness protest, and a large number of arrests. Currently, hundreds of people are facing felony charges for their participation (see : New Blanket Felony Charges Pressed against J20 Arrestees: An Unprecedented Use of Punitive Charges as a Tactic of Mass Intimidation, CrimethInc, April 29, 2017).

If your anarcha-feminist collective has been "above ground" since 2002, it's odd that you suddenly move en masse to Twitter in Nov. 2016.

It appears that a number of people had some doubts about the bona fides of NWA, sparked by various forms of ‘odd’ behaviour. For example, ‘@BlackAutonomist’ tweets:

.@NewWaveArmy @commietantric Can someone tell me why a professional anarchist would be asking people ON TWITTER if they wanna learn guerilla tactics? pic.twitter.com/cOdrV9HLhz

The NWA described itself not only as having been established in 2002, but as comprising everyone from radical feminists to (lesbian?) separatists to liberal and even neo-liberal feminists ‘across two waves’: a very odd assortment of ideologies and practices. NWA also published information on its website regarding courses in ‘self-defence’, including a list of suitable providers. Oddly for an anarchist project, NWA recommended seeking self-defence training from various police departments, seemingly from all over the United States. So … it’s a little difficult to know what to make of it all, but it’s curious that the response by ‘AnarchyMami’ and NWA to what would otherwise be considered reasonable questions was to almost immediately shut down their accounts across various social media platforms (Twitter, Facebook, Google+, Instagram, YouTube et. al.). Before this took place, however, the NWA Twitter account also twatted that it was gonna d0x ‘Black Autonomist’ and even threw in a reference to d0xxing the neo-Nazi skinhead network the Hammerskins for good measure.

All very odd stuff, but I suspect that this is far less likely to be the result of some hostile force playing funny buggers on teh intarweb than it is some over-enthusiastic ‘anarchist’ LARPing.