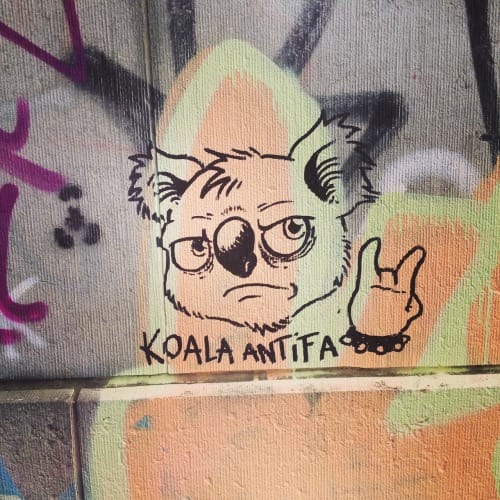 Another bloody year of semi-regular blogging …

Senator Fraser ‘Final Solution’ Anning held a rally in St.Kilda, Invasion Day witnessed large rallies (and some very smol opposition), while the White Rose Society published an exposé on the neo-Nazis, White supremacists and other fascist creeps who naturally flocked to Anning’s banner (oh and Queensland electrician Simon Hickey, ‘The Nazi Sparky’, got slapped in the courts).

The Slackest100 debuted for some reason, I reviewed Ginger Gorman’s book Troll Hunting and Blair Cottrell failed in court.

Milo Yiannopoulos was one of many pundits defending George Pell and in Christchurch one of Cottrell’s fans murdered 51 Muslims.

To begin with, I examined the leading and ongoing role of Facebook in promoting race-hate and bigotry for profit, provided an updated version of A Brief Guide To The Australian Far Right, reported on ABC Radio National’s investigations into Final Solution’s crew, and finally wrote a few words on the same mAd bastard’s ultimately unsuccessful 2019 Australian federal election campaign.

After years of urging by conrads, in May I finally launched my patreon (mAssivE props to youse guise for your support!), took a brief look at left electoral campaigns ahead of the federal election, wrote about May Day & Repression of Anarchists in Indonesia and examined the very-sad-for-Shorten results of consuming Labor’s democracy sausage.

In June there was further Trouble At The Social Media Mill and I published a (left) podcast guide.

In the US, Andy Ngo was A Thing (tl;dr : he’s a threat to our community and provides kill lists for Atomwaffen), in Australia the ABC tried valiantly to manufacture an AltLeft, and in the UK right-wing propagandist Lucy Brown broke with her good chum Stephen Yaxley-Lennon (‘Tommy Robinson’).

In August, The Zodiac Killer cheekily tried to criminalise resistance to fascism in the US and on The SUWA show we interviewed Robert Evans and so on and so forth.

One solitary, lonesome, single post in September concerned the local boneheads organising a gig for Skrewydriver Ian Stuart Donaldson (the brouhaha about the gig was quite revealing).

October saw two posts about Jock Palfreeman, more deets on the bonehead gig referred to in September and some notes.

In November, Richard Spencer (remember him?) shockingly confirmed himself to be both: a) very anti-Semitic while; b) still being endorsed by Twitter CEO Jack Dorsey; the neo-Nazi website Iron March (what gave birth to Antipodean Resistance, inter alia) sprung a leak and; fascist dimwit Richard Wolstencroft’s MUFF won the (temporary) support of Chasers nightclub in Prahran.

Melbourne boy ‘Philthy’ Phil Galea was found guilty of terrorism after being convicted of conspiring to murder local anarchists and leftists (for which crime Lucky Phil will be sentenced in early 2020), while Tarrant’s ’emperor’ Blair Cottrell had his appeal against stirring up fine folks like Phil dismissed.

• Tarrant’s (alleged) mass murder in Christchurch in March was one of several culminating points for the Australian far right;
• Facebook and YouTube have functioned as a critical platform for the promotion of such activity and, with some minor modifications, will remain so for the forseeable future;
• There was a continuing downturn in far-right street protests following the Christchurch massacre, though Anning provided an electoral pole of attraction for the far right while also some monetary compensation for the handful of nazis he hired in order to produce dank memes;
• Exposure of and resistance to fascist organising, along with lawful penalty and electoral failure, means that in 2020 many right-wing partisans will resume or continue to engage in less public and more covert activities.

I live in Melbourne, Australia. I like anarchy. I don't like nazis. I enjoy eating pizza and drinking beer. I barrack for the greatest football team on Earth: Collingwood Magpies. The 2021 premiership's a cakewalk for the good old Collingwood.
View all posts by @ndy →
This entry was posted in Media and tagged blog, Bloggy, blogosphere. Bookmark the permalink.