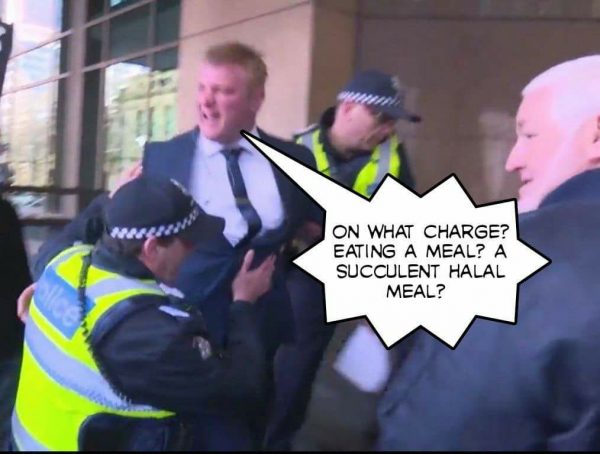 Far-right activist Blair Cottrell has been rejected in his bid to fight for “free speech” in the High Court but will continue his campaign in Victoria’s County Court.

The United Patriots Front leader appeared in the County Court today to appeal his conviction for inciting hatred, contempt and ridicule of Muslims, after making a video beheading a dummy in protest of a Bendigo mosque. Cottrell and supporters Neil Erikson and Christopher Neil Shortis were convicted in September 2017 and fined $2000 each.

Lawyer John Bolton had lodged an application with the High Court, arguing Cottrell had been charged with an “invalid law” under the Australian constitution.

He previously told AAP “free speech” was protected under the constitution, “which protects political discourse”.

However, Mr Bolton told Judge Lisa Hannan on Tuesday the High Court dismissed the application, referring the matter back to the County Court. The lawyer said he would now argue there was “no such class of persons as Muslims” that could be offended by the video, given the variety among the Islamic faith.

“Who is this supposed to have caused people to think bad thoughts about?” he argued, adding he’d call witnesses to examine “what ‘Muslim’ means”. He added a comment about Saudi Arabian beheadings, to which Judge Hannan quickly replied was “not relevant”.

The prosecution plans to call six witnesses to the trial, including City of Bendigo council workers and police.

“It’s being drawn out deliberately, I think, probably to see how much money we’ve got,” Cottrell told reporters outside court.

“I’m not going to give up.” Cottrell was supported in court by Erikson, who earlier abandoned his appeal bid.

After the hearing, Cottrell tweeted a video telling followers he hadn’t “failed anything”.

“The prosecution has found a law that the County Court can hear that matter — the High Court doesn’t need to, so the constitutional matter has been sent back to County Court for Judge Hannan to hear,” he said.

“I haven’t failed anything. The matter is still active. The law still may be unconstitutional.” The appeal was set down for 10 days from August 8, which Judge Hannan said she thought was too long.

Cottrell next returns to court on June 5 for directions.

• As reported here and elsewhere (9 News), serial pest and former UPF flunkey Neil Erikson was also in court to support his former fuehrer — Erikson is due back in Melbourne Magistrates’ Court in May to fight charges of assault, riot and affray.

• Lawyer John Bolton repped Erikson at a previous court hearing in June, at which he successfully argued for an alteration in bail conditions so as to allow Erikson & Co. to do politics ‘n’ that. ABC: ‘A magistrate agreed to vary the men’s bail conditions today to allow them to associate for the “purpose of engaging in lawful political communication or assembling lawfully”. Outside court, Mr Erikson said it was important the group could “meet up and discuss politics” as they planned to register a political party called Cooks Convicts.’ Naturally, the party was never registered, and the name abandoned for another, ‘It’s OK To Be White’, which was also never registered; currently, Erikson is promoting Fraser ‘Final Solution’ Anning’s new party, the ‘Conservative Nationals’. See : Fraser Anning’s Neo-Nazi connections, The White Rose Society, January 11, 2019.

• In October last year, Bolton organised a very smol ‘International Freedom of Speech’ rally outside Lakemba, which was attended by Cottrell, a smattering of local neo-Nazis, and various other odds & sods, including Rino ‘Bluebeard’ Grgurovic — Grgurovic is due in Melbourne Magistrates’ Court on February 26 over assault charges.

• As 9 News notes, Cottrell ‘has been convicted of numerous serious offences including arson and stalking’, along with seven counts of intentionally damaging property, failing to comply with a community-based order, two counts of recklessly causing serious injury, aggravated burglary, property damage, trafficking testosterone, possessing a controlled weapon and breaching court orders. Cottrell, as ‘Bruce’, appeared in a documentary about youth in the maximum-security Youth Unit at Port Phillip Prison in Truganina, in which he describes how he abused steroids, stalked his former partner and her boyfriend, tried to kill him, set fire to their house, and eventually got arrested, convicted, and sent to prison. You can read more about Cottrell’s political views here.

I live in Melbourne, Australia. I like anarchy. I don't like nazis. I enjoy eating pizza and drinking beer. I barrack for the greatest football team on Earth: Collingwood Magpies. The 2023 premiership's a cakewalk for the good old Collingwood.
View all posts by @ndy →
This entry was posted in Anti-fascism, Broken Windows, History, Media, State / Politics, War on Terror and tagged Blair Cottrell, John Bolton, Lads Society, Neil Erikson, The Lads Society, United Patriots Front. Bookmark the permalink.