Update (April 28, 2019) : The ‘White Rose Society’ has published an account of the little fascist shit Max Towns, the 19yo what allegedly assaulted the photographer @ Fraser ‘Final Solution’ Anning’s campaign launch @ Cronulla on Friday. The article also contains an appeal for more infos on the subject of neo-Nazi activist Troy Crockett, an associate of Blair Cottrell’s and the UPF and a member of ‘The Lads Society’. Crockett has not previously been publicly named but has otherwise been active as ‘Trè Blackstone’, ‘Trè Bloodstone’, ‘Troy’ or ‘Trè Targaryen’ and ‘Trè Greystoke’.

Update : The fascist teenybopper who allegedly punched a photographer at Anning’s media conference in Cronulla today is ‘True Blue Crew’ (TBC) NSW associate Max Towns. Towns has form, being one of a dozen or so meatheads who joined neo-Nazi Blair Cottrell in monstering entertainer Dandyman outta Fed Square in Melbourne following the TBC flagwit parade in June last year, and otherwise reportedly enjoys attacking leftist women along King Street in Newtown. The TBC was of course one of the groups the Christchurch killer was a YUGE fan of, and the TBC in QLD has organised a picnic for FACNP candidate Perry Adrelius and other patriotik candidates this Sunday in Gatton … 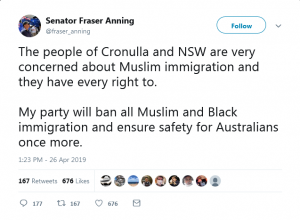 As usual, I’ll examine candidates for the 2019 Australian federal election from the far left and the far right at a later date, but in the meantime I thought I’d take a brief look at the few score Volk who’ve decided to join Senator Fraser Anning in his pursuit of a Final Solution to The Immigration &/Or Muslim Problem. With the possible exception of Anning himself, none have any real chance of being elected to office, and their entry into the contest may well simply end up fracturing the far right vote, pitted as they will be against Pauline Hanson’s mob. Still, as the Prime Minister put it so eloquently ‘If you have a go, you get a go’, so who knows who’ll end up getting what.

In summary then, Fraser Anning’s Conservative National Party (FACNP) is fielding candidates in 45 seats in the House of Representatives — 30 in Queensland, 6 in Victoria, 5 in New South Wales and two each in the Northern Territory and Tasmania — along with Senate teams in every state and territory. Most are unknown figures, with just a handful having any kind of public profile, and others transferring their political loyalties from a previous micro-party to Anning’s.

As noted below, Anning choose Cronulla beach to launch the NSW component of his campaign today, the beach being the site in 2005 of a major race riot and a point of celebration for many other white nationalists. In January, Anning held an anti-African rally at St Kilda Beach in Melbourne on the 100th anniversary of the launch of The German Workers’ Party (German: Deutsche Arbeiterpartei, DAP), the precursor to the Nazi party (NSDAP). As also noted previously, his office and social media campaign employs a number of neo-Nazis, fascists and White supremacists. See : Fraser Anning’s Conservative National Party, Andrew Wilson, neo-Nazis, & the 2019 Australian federal election (April 20, 2019). 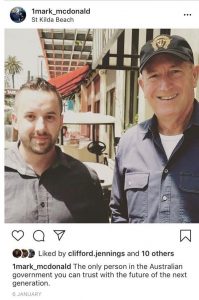 Anyway, here’s a few of the more colourful characters running with Anning this year (a list to which I may add in the coming weeks):

Mark Absolon would appear to be ‘Messianic Torah Observant’, which is … ah … yeah.

A semi-professional climate change denialist, scribbler for Quadrant and The Spectator who reckons single moms are too lazy and stoopid to attract a mate, Archibald is a former One Nation Party (ONP) candidate (Western Australian state election, 2017: Pilbara) and one of several aspiring MPs to have jumped ship for Anning’s party. (He also ran in the federal seat of Curtin in 2016 for the anti-Muslim micro-party ‘Australian Liberty Alliance’, which is now known as ‘Yellow Vest Australia’).

A Bannon and Trump fanboy, Professor Cheok got a few moments in the spotlight last year. Hence:

The political views of Stephen K. Bannon, the former White House chief strategist and co-founder of the far-right Breitbart News, are considered repugnant by many people in academe.

So when it was announced last week that Bannon would be a keynote speaker at the Advances in Computer Entertainment Technology conference, to be held at the University of Montana’s flagship campus in December, people revolted. Bannon is said to be an architect of Gamergate, a 2014 hashtag campaign that brought virtual hatred to women and minorities in the gaming community.

The other keynote speaker dropped out. The university distanced itself. A hashtag circulated, calling for those who had submitted papers to withdraw them, and for potential attendees to boycott the conference.
The Future of Learning

And at the center of the outrage is Adrian David Cheok, who in the past year has alienated his colleagues through a presentation on sex robots, and by his online emulation of the only hard-right figure more famous than Bannon: President Trump.

Just a few weeks ago, Cheok was urging the importance of voting for the Christian fun-da-mentalist ‘Rise Up Australia Party’ (RUAP), but has obviously changed his mind, and now urges concerned citizens to support Final Solution.

You may remember Julie Hoskin from such anti-Muslim groups as ‘Rights For Bendigo Residents’ (2014–), which among other things staged demonstrations against and launched a legal challenge to the construction of a mosque in the Victorian town. Unhappily for Hoskin, the legal challenged ultimately failed, and she ended up owing tens of thousands to solicitor Robert Balzola, who undertook the case. Consequently, in September last year, Hoskin was declared bankrupt and forced to resign her seat on Bendigo council. As a result, Hoskin is likely ineligible to take up a seat in parliament in the miraculous event (“Praise Jesus!”) she should win.

Kelly is a former ONP councillor in Ku-ring-gai and adviser to (former) NSW One Nation senator Brian Burston (see : One Nation councillor Peter Kelly has links to a Muslim sultan and a questionable PhD, Lisa Visentin, The Sydney Morning Herald, September 22, 2017). Kelly’s campaign got off to a flying start today when after a media conference announcing his candidacy one of his teenybopper supporters allegedly punched a journalist and subsequently got arrest. See : Fraser Anning federal election candidate announcement in Cronulla ends with violent scuffle, Nick Dole and Kevin Nguyen, ABC, April 26, 2019 | Man charged after scuffle with photographer at Fraser Anning press conference, Matt Bungard and Jenny Noyes, The Sydney Morning Herald, April 26, 2019.

Not to be confused with the serial killer AKA ‘The Beast of Birkenshaw’, Manuel is a ‘salt-of-the-earth farmer’ according to his comrade David Flint. Further, according to the elderly monarchist, at the nineteenth annual gathering of ‘Australians for Constitutional Monarchy’, Manuel warned that ‘mainly republican politicians who prefer to waste money on buying votes or on massive financial disasters like the NBN … prefer to have our water flow out to sea while unleashing a reign of terror on our persecuted farmers as if they were latter-day Kulaks’ (‘Aux bien pensants’, Spectator, February 16, 2019). When he’s not being a persecuted, climate-change denying Kulak, Manuel may be found touting the virtues of some thing called ‘FLAG Australia’.

Scott Moerland is best known for being one of the faces of ‘Reclaim Australia’ in Queensland and a founding member of the ‘United Patriots Front’ (2015–2017). A Christian, Moerland ran for RUAP at the 2013 federal election and received 400 votes (0.53%) for his troubles. Otherwise, Moerland’s candidacy contradicts Anning’s claim, made in early April, that he would rule out running anyone tied to Blair Cottrell and Neil Erikson (Moerland’s former UPF comrades).

On his Facebook page promoting his campaign, Vail endorsed Bill Heffernan’s 2015 claims about elite paedophile rings, concluding that ‘If you put a number in a box on any ballot paper that now makes YOU an enabler of Paedophile filth’.

A former soldier with 3RAR, Van Duren’s candidacy was soon brought into question on account of his criminal record — he assaulted a police officer and choked an RSPCA inspector in Canberra in 2015, and last year was involved in an exciting escapade with his brother Owen in Thailand — and as a result it would seem likely that, in the extraordinary event he was elected to the Senate from Canberra, he too would be ineligible to sit.