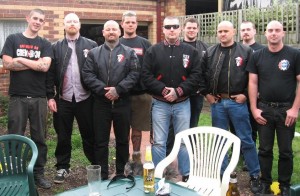 Last week, 7 News reported that on Saturday, October 12 a ‘white power’ concert organised by Blood & Honour Australia will be taking place in Melbourne.

Below are some comments in response.

2) The event is organised annually, on or about the anniversary of the death of B&H founder Ian Stuart Donaldson (1957–1993). It’s been held in Melbourne, uninterrupted, for the last 25 years.

3) The organisation and promotion of the gig is lawful activity.

5) The organisers are known to authorities, and accounts of the event are regularly published in the B&H zine.

6) Fortress, the headline act, is described in the report as a well-known band on the Australian ‘white power’ music scene. That’s kinda sorta correct, however: there’s only a handful of WP bands in Australia; Fortress is Big In Japan Europe. Thus one of their last gigs was in Verona, Italy to celebrate Hitler’s birthday (April 20), while the band has also played in Germany since reforming in 2017. 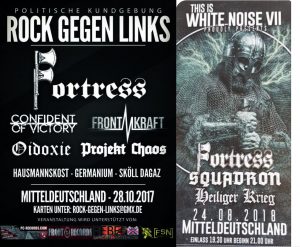 7) The report concludes by noting that: The Blood and Honour Australia group refuses to speak to journalists, believing the media is controlled by Jewish interests. Its chapter in Germany was banned in 2000 for promoting music that allegedly inspired a string of attacks on foreigners.

The group’s refusal is a sensible policy, as there’s nothing to be gained from speaking to (((the media))), who regularly promote their events in any case. Further, and somewhat oddly, while B&H is banned in Germany (2000), it’s also banned in Spain (2010) and Russia (2012) and earlier this year Canadian authorities proscribed it as a ‘terrorist’ organisation (though this would appear to apply to the Combat 18 splinter). B&H/C18 has also been linked to the assassination of German politician Walter Lübcke in June of this year.

As for the Hammerskins, they’re banned in Spain (2009) and Portugal (2010?). In 2016 in Portugal, 20 members were arrested and charged with hate crimes, attempted murder and robbery; in 2017, German members of the Hammerskins attacked a gig in Mallorca.

Of course, the most serious act of violence carried out by a Hammerskin was the massacre of Sikhs in Wisconsin in 2012.

8) I haven’t paid all that much attention to B&H/SCHS in the last few years (it’s pretty much steady-as-she-goes) but in September last year I did note that:

Pioneering Aussie reich ‘n’ rollers Fortress have recorded a new album: ‘Brothers of the Storm’. The release comes in the wake of renewed touring by the band in Europe, with the boys playing a Hammerskins event in Frankreich (FRA) on March 18 last year, the annual memorial to Skrewydriver Ian Stuart Donaldson in Melbourne (AUS) on October 14, 2017 and another bonehead gig in Queensland on July 21, 2018.

9) The gig regularly attracts anywhere from 50 to 100 neo-Nazis. They spend the weekend partying in Melbourne and may sometimes be found doing so in English theme pubs, German restaurants and the like. So from October 11-13, please be aware they will be about … See : Dahlonega rally organizer on probation for 2016 assault in local bar, Chris Joyner, The Atlanta Journal-Constitution, September 13, 2019 (A police report from that night describes Doles as the leader of a group of Hammerskins, a racist skinhead gang with chapters around the nation, who fought with other bar patrons. According to a witness statement, Doles “went wild and began striking people indiscriminately” in response to a patron who said they hated skinheads, but then fled the scene when police were called and had to be tracked down near the campus of the University of North Georgia.).

For news on the many crimes & misdemenours of the Hammerskins in the US, see : SPLC Hatewatch on Hammerskins; see also : A Brief History Of Neo-Nazi Music In Australia (December 2, 2010).

I live in Melbourne, Australia. I like anarchy. I don't like nazis. I enjoy eating pizza and drinking beer. I barrack for the greatest football team on Earth: Collingwood Magpies. The 2021 premiership's a cakewalk for the good old Collingwood.
View all posts by @ndy →
This entry was posted in Anti-fascism, Media, Music, State / Politics and tagged Blood & Honour, Blood & Honour Australia, Blood and Honour, Blood and Honour Australia, Boneheads, Crew 38, Fortress, Hammerskins, neo-Nazi, Neo-Nazi skinheads, Scott McGuinness, Southern Cross Hammerskins. Bookmark the permalink.