1) More planeloads of racist dickheads on their way 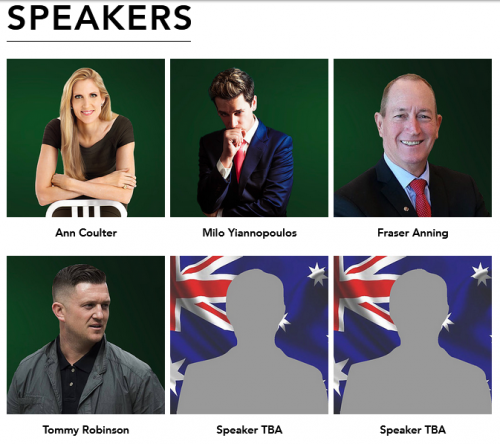 ‘Australia’ was founded as a dumping-ground for the shit of British Empire. Over two centuries later, it’s now a lucrative market for other forms of animae viles. Thus, Milo Yiannopoulos returns to our shores in November, on this occasion bringing with him another wealthy right-wing blabbermouth, Ann Coulter. If all goes to plan, the pair will be accompanied by Senator Fraser ‘Final Solution’ Anning, Stephen Yaxley-Lennon (assuming he’s not back in prison and/or in breach of his bail conditions by leaving E-E-England) and other speakers yet TBA.

The tour kicks off on the Gold Coast on November 29, followed by a ‘VIP Yacht Cruise’ on November 30, and then proceeds to Sydney on December 2, with another v xpnsv boat trip on December 3, and performances in Melbourne (December 5), Adelaide (December 8) and finally Perth (December 11).

The tour is being organised and underwritten by Queensland businessman Dan Spiller AKA ‘Future Now Australia’.

Until very recently, twice-convicted racist Neil Erikson was Mister Spiller’s gopher, which role included paying a nocturnal visit to the family home of sometime-rival Dave Pellowe AKA ‘Axiomatic Events’ (the mob responsible for bringing Stefan Molyneux and Lauren Southern Down Under).

Presumably, Spiller’s deranged acolyte will now have more time to devote to his various legal defences. 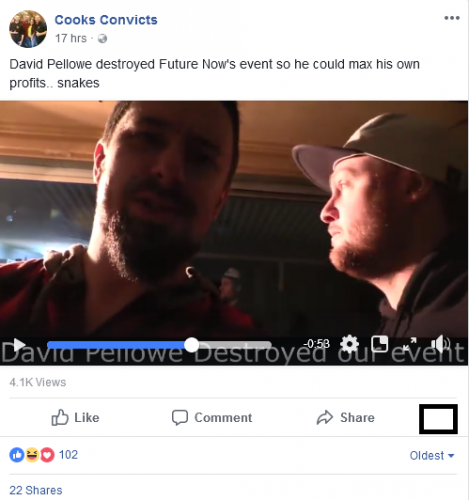 As for the luminaries Spiller will be hoping to turn a hefty profit from, Infowars-supplements salesman Milo has been having a somewhat difficult time of late, whining on Facebook about being uninvited from a conference in October and castigating his fans for failing to shovel enough money in his direction: I have lost everything standing up for the truth in America, spent all my savings, destroyed all my friendships, and ruined my whole life, Yiannopoulos wrote: At some point, you realize it’s occasionally better to spend the money on crabs and cocktails.

Fortunately for him, Facebook remains committed to facilitating his batshit, he receives the red-carpet treatment in Australia, and is celebrated by Newscorpse, including The Australian columnist Janet Albrechtsen. When she’s not enjoying Milo’s anti-Aboriginal diatribes (a sample from his talk in Perth is below), Albrechtsen may be found promoting the work of the Australian Indigenous Education Foundation (AIEF), where she serves as a brand ‘Ambassador’. Quite how Albrechtsen squares her support for Milo with her role as ambassador I don’t know: after I asked the AIEF for comment on Twitter, I was blocked.

Because newsflash [Aboriginal art] really is shit … Now Australians in this sort of bizarre form of middle-class guilt have decided to pay obeisance to a culture that failed to invent the wheel — and whose signature musical achievement is a big stick … The ugly truth that they don’t want you to say out loud is that history has winners and losers. The progressive left wants to turn Western countries into the only developed civilisations in the history of human society that shit on their own accomplishments in favour of vastly inferior civilisations for no apparent reason. Hence we’re confronted with the ugly spectacle of your own nation and ‘welcome to country’ … and the desperate, pathetic attempts to pretend that didgeridoos represent a beautiful and historic cultural achievement, and not a punchline to a joke. Now you might not know this, but there are absolutely no Aboriginal people left alive in Australia — the last ones died in the ’60s and ’70s, and since then George Soros has been shipping over Black Lives Matter activists, giving them tubs of white-out, and telling them to just daub themselves and make all the White people feel bad. Your politicians in a symbol of how intelligent they are have been falling for it for half-a-century.

So much for Milo. As for Coulter, while she’s been splashing about in the white nationalist pool for some years now, in April ‘Coulter gave a little more credence to those accusations [of white nationalist sympathies] by exposing her Twitter following of just under 2 million users to Mike ‘Enoch Peinovich’‘, a neo-Nazi blabbermouth from (((New York))).

See also : When Mormons Aspired to Be a ‘White and Delightsome’ People, Emma Green, The Atlantic, September 18, 2017 (‘An historian looks at the legacy of racism in the Church of Jesus Christ of Latter-day Saints’).

Since his unexpected elevation to the Australian Senate following the disqualification of crazed pixie Malcolm ‘Jew World Order’ Roberts, Fraser ‘Final Solution’ Anning has been furiously competing with Pauline Hanson for the title of ‘Most AltRight 2018’. Thus his political obsessions have run in rough parallel with those of the baying KKKrowd, from the plight of White South African farmers to the dastardly conspiracy to commit White Genocide™, calling for the forcible eradication of Islam from Australian shores, Putin fanboydom and climate change denial. Recently, however, there’s emerged another contender: billionaire Clive Palmer. See : Alt-Right Memes and Clive Palmer’s Return to Politics, Jordan McSwiney, POP POLITICS AUS, September 27, 2018. Chumbawamba, however, are not down with the bloated idiot. See : Chumbawamba knock down ‘Trump-lite’ Clive Palmer over song use, Naaman Zhou, The Guardian, August 31, 2018.

**Anning, along with Avi Yeminem (Australian Liberty Alliance), is scheduled to appear at a rally in Melbourne on October 6 in order to protest censorship by Facebook.

Recently, after declaring his appreciation for NYHC band ‘Sheer Terror’, only to be rebuffed by the boys, McInnes’s followers have rather foolishly declared WAR! on skinheads, in particular RASH and SHARP (See : Hardcore Legends Sheer Terror Take the Proud Boys Down a Notch, Landon Shroder, rvamag, September 26, 2018).

It's been brought to our attention that Gavin McInnes was speaking favorably about us on his podcast.

Just to make things as clear as possible so there is no mistaking where we stand :

'PROUD BOYS' ARE NOT WELCOME HERE,OR ANYWHERE WE MIGHT BE.

McInnes is proudly-sponsored by Penthouse magazine and publisher Damien Costas, who in September was responsible for arranging Nigel Farage‘s tour of the colonies, and in December 2017 that of Milo Yiannopoulos. Following Milo’s tour, Victoria Police made noises about issuing an invoice to Costas for $50,000 for costs associated with their policing his tour but a savvy Costas told them to bugger off and, happily enough for him, they did. 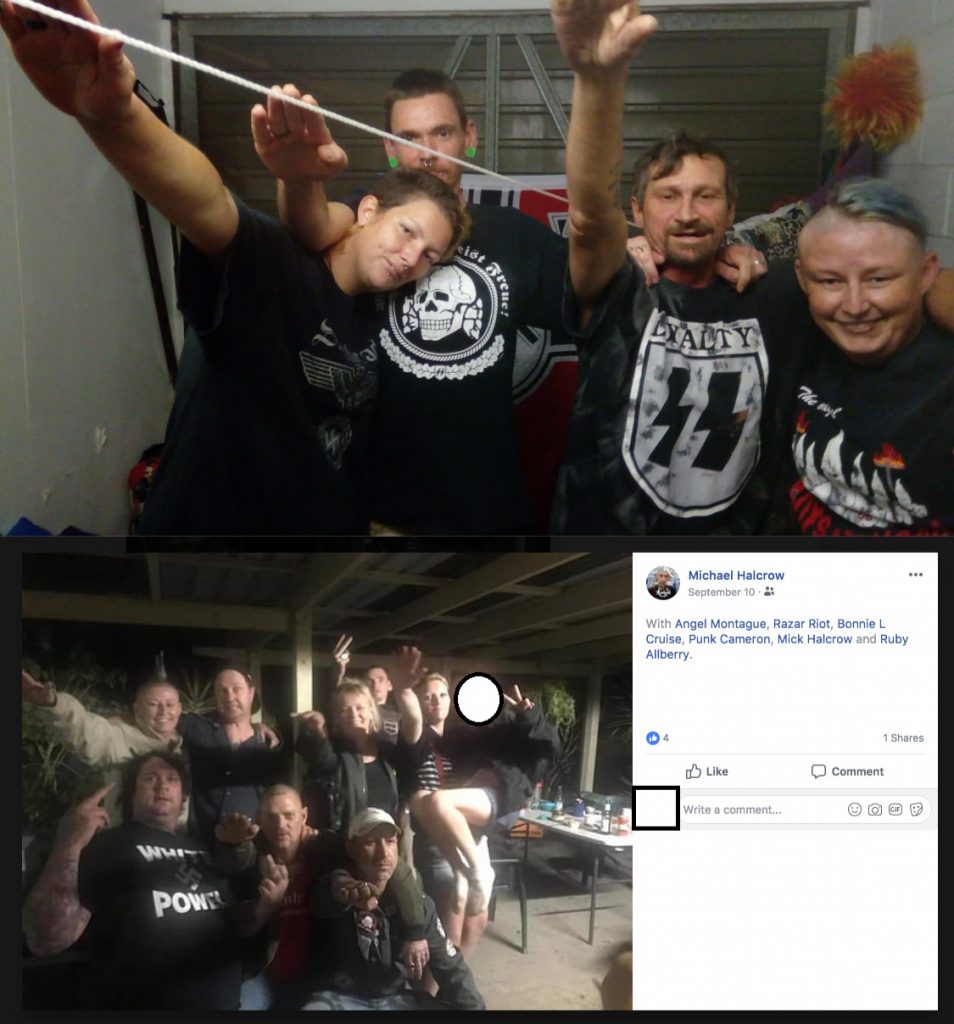 Speaking of nazi punks, one, ‘Angel Montague’, is currently running a Facebook page called ‘Brisbane city punks’. Allegedly, Montague has been banned from the pubs The Back Room (Chardons Hotel) in Annerley and The Jubilee in Fortitude Valley and possibly one or two others for drunken violence. Still, by most accounts Brisbane punx give short shrift to neo-Nazi shenanigans, so it would make sense if Montague and her handful of neo-Nazi mates were continued to be shown the door. 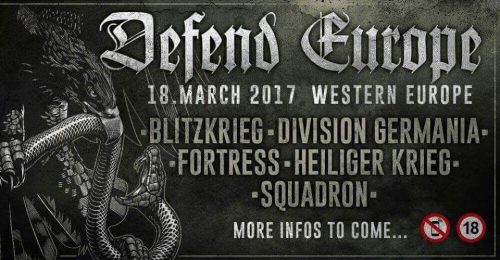 Pioneering Aussie reich ‘n’ rollers Fortress have recorded a new album: ‘Brothers of the Storm’. The release comes in the wake of renewed touring by the band in Europe, with the boys playing a Hammerskins event in Frankreich (FRA) on March 18 last year, the annual memorial to Skrewydriver Ian Stuart Donaldson in Melbourne (AUS) on October 14, 2017 and another bonehead gig in Queensland on July 21, 2018.

One neo-Nazi who probably won’t be making any more muzak is Marcel ‘Flubber’ Kuschela. Kuschela, who performed with ‘Kategorie C’, committed suicide in the German town of Moenchengladbach last week: ‘According to the German newspaper Bild and public broadcaster WDR, the victim is a known right-wing extremist and Hooligan who is part of the extreme right-wing band “Kategorie C” and co-founded a movement known as “Hooligans against Salafists” (Hogesa).’ 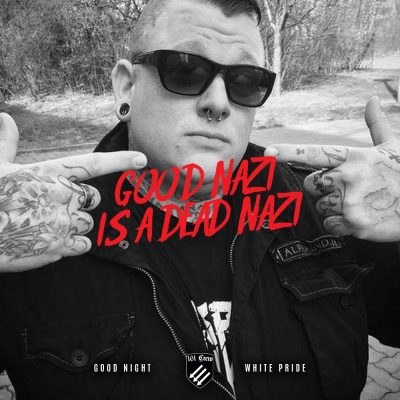 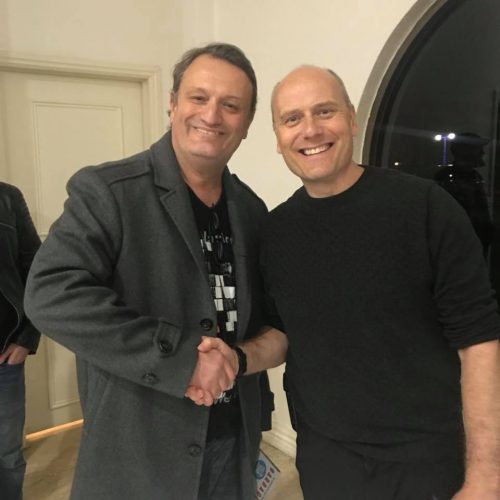 In an about-face that surprised no-one, Richard Wolstencroft has returned to the helm of the Melbourne Underground Film Festival (MUFF). This follows a brief moment last year when, after having made a stoopid homophobic statement, he ‘resigned’ as organiser and handballed responsibility for it to a flunkey. But in June he returned.

The fascist meathead’s festival does have its supporters, but such is the stench emanating from Wolstencroft he’s having some difficulty finding a venue to screen his shite. Hence ‘Club Voltaire’ in North Melbourne was on-board, and then not, and now the main venue is Top Secret.

See also : After His Show Was Canceled Due to Alleged Neo-Nazi Ties, Boyd Rice Claims ‘Offers Are Coming In’ to Restage It, Sarah Cascone, artnet, September 13, 2018.

In AUS, 4Corner’s recent interview with jet-setting fascist shitweasel Steve Bannon is examined by The Guardian writers Nesrine Malik in Indulging Steve Bannon is just a form of liberal narcissism (September 13, 2018) and by Jason Wilson in The consequences of Steve Bannon’s ideas need to be interrogated, not just his words (September 5, 2018); writer Laurie Penny has written a piece in response to the decision by The Economist to provide Bannon another platform in ‘No, I Will Not Debate You’ (September 18, 2018) … which could also be read in light of her earlier adventures with Milo. In BENdigo, meanwhile, anti-Muslim campaigner Julie Hoskin has been forced to resign her position on council after being declared bankrupt — seemingly, in no small thanks to the efforts of lawyer Robert Balzola. See : Bendigo councillor Julie Hoskin, the centre of anti-mosque protests, declared bankrupt and resigns, Peter Lenaghan and Mark Kearney, ABC, September 26, 2018 | Julie Hoskin declared bankrupt one day before sending councillor resignation to City of Greater Bendigo, Adam Holmes, The Bendigo Advertiser, September 26, 2018.

In FRA, two boneheads have been convicted of the murder of anti-fascist Clement Méric in 2013 (see : Two boneheads convicted over 2013 death of anti-fascist activist, The Guardian, September 15, 2018); in GER, Facebook Fueled Anti-Refugee Attacks in Germany, New Research Suggests (Amanda Taub and Max Fisher, The New York Times, August 21, 2018); in GRE, Kevin Ovenden has authored a ‘new study that documents the murderous activities of Greece’s far-right Golden Dawn’ (The terrorist activity of neonazi organisations in Europe – The case of Golden Dawn, jailgoldendawn, September 18, 2018); last week in ITA, an MEP, Eleonora Forenza, and their assistant were attacked by members of neo-Fascist organisation Casapound after attending an anti-racist rally (MEP and assistant attacked by Italian far-right group, Lili Bayer, politico.eu, September 22, 2018); in the USA, Hope Not Hate ventured ‘Inside America’s biggest anti-Muslim organisation’ (Charlie Prentice, September 16, 2018); also in the US, Derek Black, son of White supremacist and Stormfront founder Don Black, stars in Renouncing Hate: What Happens When a White Nationalist Repents (Wes Enzinna, The New York Times, September 10, 2018), while Media Matters examines some of the white nationalists who write for FOX News’ Tucker Carlson’s batshit website The Daily Caller in ‘The Daily Caller has published white supremacists, anti-Semites, and bigots. Here are the ones we know about.’ (September 5, 2018); Billy Briggs for The Ferret writes that ‘YouTube provides a network for far right extremists such as Scot Colin Robertson, aka Millennial Woes, to promote white supremacist views and radicalise people, according to a new report’ (Far-right Scots vlogger named in report on YouTube extremist networks, September 23, 2018); the report — ‘Alternative Influence: Broadcasting the Reactionary Right on YouTube’ — by Rebecca Lewis for Data & Society (September 18, 2018), can be read here.

More generally: ‘Far right’ groups may be diverse – but here’s what they all have in common, Daphne Halikiopoulou, The Conversation, September 27, 2018 | The Religion of Whiteness Becomes a Suicide Cult, Pankaj Mishra, The New York Times, August 30, 2018 (‘A wounded and swaggering identity geopolitics puts the world in grave danger.’) | Against mirror world: fascists were not socialists, Comrade Motopu, libcom, August 26, 2018.