‘Halcyon Days? The Amalgamated Metal Workers’ Union and the Accord’ [Extract]

I chucked up some stuff from this title last post, but thought I might chuck the conclusion from Elizabeth Humphrys’ essay up here as well. See also : How Labour Built Neoliberalism: Australia’s Accord, the Labour Movement and the Neoliberal Project, Elizabeth Humphrys (Brill, 2018). 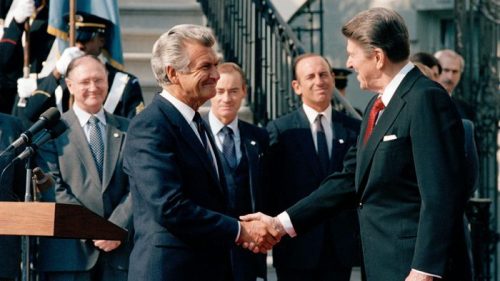 … With the AMWU leading the way, the militancy and organisation of the Australian union movement in the 1970s enabled its leaders to push their way into the highest levels of national political and economic decision-making, in the shape of the Accord. This social contract was central to drawing unionised workers directly into the process of national economic restructuring. However, the cost of this process was the weakening, disorganisation and fragmentation of the union movement. Unions suffered from declining membership they could not reverse, decreased activity and organisation at the workplace level, and an increased focus on local and sectional interests once enterprise bargaining began to take hold. Enterprise bargaining successfully stemmed the threat of open rebellion against the Accord, but its timing and legal framework meant it could not prevent an acceleration of union membership decline. There was a consequential deterioration of the relationship between the ALP and the ACTU, as both sides found diminishing value in cooperation. Whether a sustained pushback by militants forming breakaway unions could have reversed the further decline of worker organisation is impossible to know in retrospect, but it seems likely that the deterioration prior to 1989 had already been sufficient to change the overall balance of forces, and that the shift to enterprise bargaining simply reinforced the downward trajectory of the early 1990s and beyond.

Current [sic] ACTU President Ged Kearney has described the Accord’s centralised wage system of the early 1990s as a ‘yoke and shackle for unions’ and that because of this they ‘fought for and won direct collective bargaining’. Kearney also argued that union leaders were aware that the election of a conservative government was inevitable, and that there was a ‘need to rejuvenate the capacity of the union movement to organise, to bargain and campaign again’. But this is not what enterprise bargaining delivered in practice. Instead, the labour movement was unable to recover its declining workplace density.

The contradictions of the Accord also point to the improbability of a similar social contract being used to drive radical political economic reform in the future. This is because the social organisations that were central to instituting the Accord were hollowed out in the process of the social contract, so much so they can no longer play the same role — and nor can they be as effective in resisting such reforms as they had been in previous decades. During the Accord years there was a substantial fall in the level of unionisation from 49 to 32.7 percent. In the years since, this has fallen by a further 50 percent to under 15 percent. While there is debate about the relationship between the Accord and this decline it is clear that, within the Accord framework and through the ACTU’s post-Accord era strategy, there has been no sustained reinvigoration of union activism or organisation across the country.

The failure of the left unions’ strategy of industrial militancy and mobilisation to resolve the crisis in favour of labour (in the 1970s and early 1980s) resulted in these unions seeking a political solution through central state planning, and, thus, being brought inside the state and political society. The role of the CPA-led AMWU in the Accord process demonstrates how the social contract incorporated a militant union suffused with radical perspectives into the new political project centred on reviving accumulation and ‘modernising’ the Australian economy. Central to neo-liberal restructuring was the participation of unions in industry structural adjustment and efforts to increase productivity, which proceeded alongside the attempted reorienting of the Accord in the 1986–1987 Australia Reconstructed initiative. The shift from a workplace-focused strategy to a corporatist one facilitated the enwrapment of labour and the trade union leadership by political society and its priorities. This resulted in the molecular transformation of the AMWU — its leaders, members and structures — so that they were no longer capable of playing a significant role in defending, let alone winning, social gains for Australian workers. In the end, the solution the AMWU adopted for the impasse of its previous strategy of industrial militancy hollowed out the union’s membership and power — which exacerbated the devastating impact of economy-wide changes on the metals and manufacturing industries. This was a tragic outcome, the consequences of which reverberate well beyond its ranks and are still with us today.

See also : An Integral State: notes on marx & gramsci | With Sober Senses: Fault Lines of Capital Accumulation & Front Lines of Class Struggle | Journal of Australian Political Economy | Change The Rules | Our unions in crisis: how did it come to this?, Tom Bramble, Marxist Left Review, No.15 (Summer 2018) | Strike action ‘near extinct’ as wages stagnate, think tank says, Stephanie Chalmers, ABC, January 30, 2018 | Australian unions on the eve of May Day… (April 30, 2012).

I live in Melbourne, Australia. I like anarchy. I don't like nazis. I enjoy eating pizza and drinking beer. I barrack for the greatest football team on Earth: Collingwood Magpies. The 2023 premiership's a cakewalk for the good old Collingwood.
View all posts by @ndy →
This entry was posted in History, State / Politics, That's Capitalism! and tagged #ChangeTheRules, An Integral State: notes on marx & gramsci, Elizabeth Humphrys, Journal of Australian Political Economy, Marxist Left Review, The Far Left in Australia since 1945, With Sober Senses: Fault Lines of Capital Accumulation & Front Lines of Class Struggle. Bookmark the permalink.