From The Department Of “And I Would Have Gotten Away With It Too, If It Weren’t For You Meddling Kids” … 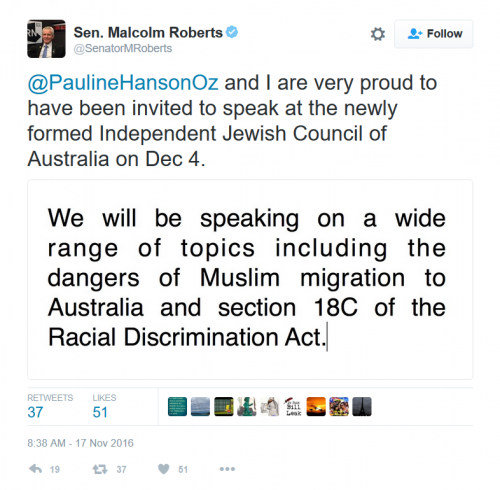 Local gym owner Avi Yemini’s invitation to One Nation Party senators Pauline Hanson and Malcolm Roberts to address a public meeting in Caulfield this weekend (Sunday, December 4) was rejected by the dynamic duo on Wednesday (November 31), ostensibly as a result of security concerns.

See : ‘Intimidated’: Hanson, Roberts cancel plans to address Melbourne’s Jewish right, Bianca Hall, The Age, November 30, 2016 | Security fears cancel Hanson’s Melbourne meeting, 9News (AAP), November 30, 2016 | Hanson, Roberts cancel event due to security scare, Crikey, December 1, 2016 (According to Crikey, “The event was originally meant to take place at Glen Eira Town Hall, but it was moved to a pub when the council decided they didn’t want to be associated with it” — I assume that the ‘pub’ in question refers either to Yemini’s gym or the Bowls Club).

The meeting attracted opposition organised under the umbrella of ‘Jews against fascism’ — a dangerous rabble described by Malcolm ‘Jew World Order’ Roberts as being ‘horrid’, ‘vicious’, ‘vile’ and ‘violent’. The cancellation of the meeting has deeply upset Hanson fanboys, from Yemini to professional trollumnist Andrew Bolt. Bolt himself has pleaded — from the safety of his plush office — for Victoria police to stage a showdown with the far left, and to rid Melbourne of these meddling kids.

Originally scheduled to take place at Glen Eira council, the venue was changed to Yemini’s gym and finally — thanks to the active support of its president and board — to Caulfield Bowls. While Yemini has assumed responsibility for arranging the meeting, also invoked as supporting the initiative is the ‘Independent Jewish Council of Australia’ (IJCA), an obscure group that apparently formed in 1996 but only acquired a website a few weeks ago … though judging by the site’s contents, it’s far from certain that the site is, er, legit.

Other Jewish organisations responded negatively to the proposed meeting.

As many would be aware, One Nation senators Pauline Hanson and Malcolm Roberts will be coming to Caulfield to spruik their divisive and racist politics to the Jewish community. Along with many others in the Jewish community, AJDS stands firmly opposed to the ideas which they put forward, standing instead for principles and practices of inclusion, diversity, and real, substantial multiculturalism.

… those of us who do not share those sympathies, who are prepared to stand up to bigotry and defend the rights of minorities, are entitled to protest: to say that while Hanson and Roberts may be speaking in our heartland, the majority of us do not feel they are welcome.

While people are entitled to express their views, we hope that Senators Hanson and Roberts do not use this platform to scapegoat, single out and demonise any religious and ethnic group, which only undermines our multicultural society and contributes to a climate in which bigotry and hatred become mainstream and acceptable …

Whilst the Executive Council of Australian Jewry (ECAJ) and the Jewish Community Council of Victoria (JCCV) generally support the right of people to express their opinions and speak publicly, neither the ECAJ nor the JCCV supports the planned One Nation event being organised in Caulfield in December by the self-styled Independent Jewish Council of Australia (IJCA).

(In its Annual Report on Anti-Semitism for 2015, the ECAJ notes that “Reclaim rallies have included neo-Nazis, and other far Right people, Pauline Hanson as a speaker, white pride groups, racist sentiment, and swastika tattoos. One major Reclaimer, neo-Nazi Neil Erikson [see below], was convicted of making abusive and racist phone calls to a Melbourne rabbi. Australia’s most prominent neo-Nazi, Ross ‘The Skull’ May, has given support to Reclaim.” In which context, it’s worth noting that, as well as being arguably ‘Australia’s most prominent neo-Nazi’ and Reclaim Australia supporter, ‘The Skull’ was on board the bus from Sydney to Melbourne in order to attend the July 18 Reclaim Australia rally, along with John Oliver of the Patriots Defence League of Australia. Oliver tried to bring a gun with him, and had previously threatened to kill me. He now appears to be active on Twitter as @Ban_asslam.)

We stand firm against the policies and politics of those such as Pauline Hanson, Malcolm Roberts and the One Nation Party. We believe that people should not be judged by their ethnic origin or religion, but by their actions towards peace and the harmony of our community.

The Australia/Israel & Jewish Affairs Council did not release a position statement on the affair, but Tzvi Fleischer wrote about ‘Senators in glass houses’ and attempted to trace connections between Malcolm Roberts and anti-Semitism in particular. Dean Sherr, writing for the AJN (Not in our backyard!, November 25, 2016), notes that:

… across the two federal seats that cover Caulfield and much of Glen Eira, Goldstein and Melbourne Ports, Hanson’s One Nation polled between 0.38 per cent and 0.40 per cent. In the six booths across Caulfield, One Nation polled a total of 26 votes, a similar percentage. Even combined with the more explicitly anti-Islam party, the Australian Liberty Alliance, the anti-Islam bloc failed to total one per cent in the heart of Melbourne’s Jewish community. To paraphrase Senator Roberts, where’s the “empirical evidence” of a Jewish undercurrent of One Nation support?

When One Nation first emerged in the late ’90s, its relationship with the far right was a key issue. In 2001, Danny Ben-Moshe wrote (One Nation and the Australian far right, Patterns of Prejudice, Vol.35, No.3):

One Nation, the Australian anti-immigration political party established in April 1997 by independent MP Pauline Hanson, was defined by its founder’s explicit and hostile attitude towards Aboriginal reconciliation, Asian immigration and the resulting multiculturalism. With similar views being espoused by Australia’s organized racist groups, there was constant speculation about the nature of One Nation’s ties to the racist right. Theories ranged from active recruitment to subversive infiltration, but the truth is somewhere in between. Almost every racist group endorsed One Nation and their members joined the party and sought to exert influence over it, both at a leadership and grassroots level.

The furore over Yemini’s invitation to Hanson and Roberts to address a meeting in Caulfield, and its subsequent cancellation, has similarly provoked a number of racist groups, including the Facebook group ‘Australian Settlers Rebellion’, which offered the following meme as a puny defence: 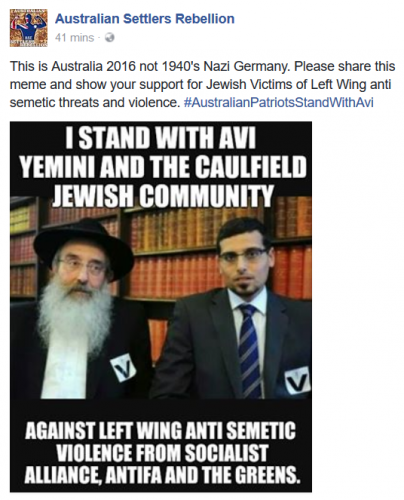 • Erikson, a former member of the neo-Nazi groupuscule ‘Nationalist Alternative’, spent years as a neo-Nazi activist in Melbourne and, as noted by the ECAJ Report, has a criminal conviction (February 2014) for harassing a Melbourne rabbi:

Neil Luke Erikson, 29, phoned Rabbi Dovid Gutnick of Melbourne City Synagogue on three occasions, telling him “Give me the money Jew or else I will get you” and abusing him for his faith.

He also spoke of circumcisions, blood money and Jewish sidelocks and told Rabbi Gutnick he knew his location and was coming to get him.

Magistrate Donna Bakos said she had no doubt Erikson’s calls were motivated by prejudice and found he had little remorse for his crime.

Erikson is due back in court in March next year, along with UPF fuehrer and neo-Nazi Blair Cottrell and fundamentalist Christian and White nationalist Chris Shortis (Australia First Party), for alleged racial and religious vilification arising from the publicity stunt the trio (along with John Wilkinson and Linden Watson) staged in Bendigo last year in order to promote an anti-Muslim rally;

• The photo the simpletons have used is actually of Manny Waks (R) and his father, Zephaniah (L). Avi Yemini, the captain of the Hanson failboat in Caulfield, is brother to Manny;

• The protest was organised by Jewsagainstfascism. Burgess and Erikson, on the other hand, happily and knowingly collaborated with a range of neo-Nazis and fascists in both Reclaim Australia and the UPF before spitting their dummies and embarking on a number of other failed projects, of which ARSE is merely the latest;

See also : Jews United: Pauline Hanson And Malcolm Roberts Sent Packing, Michael Brull, New Matilda, December 2, 2016. Brull (and New Matilda) takes note of Avi Yemini’s desire to have Waleed Aly removed from television and from the country, but he is also on record as wanting to impose a total ban on immigration from Africa and the Middle East on the basis that such people will dirty the streets. 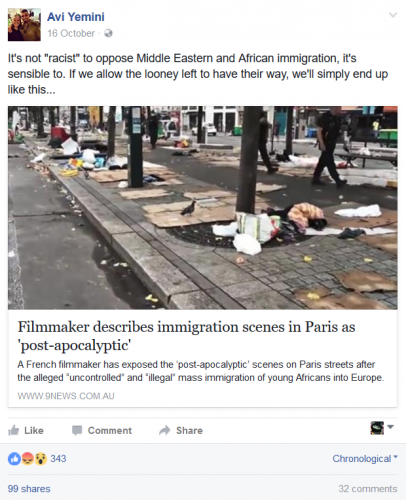 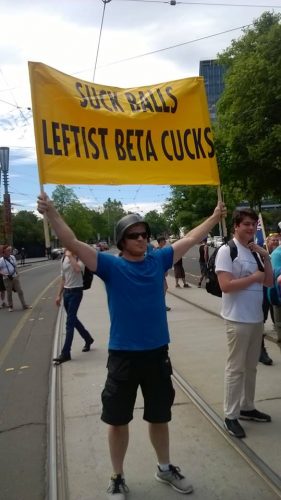 A few articles of interest: New York’s Alt Right (Part I), NYC Antifa, November 29, 2016 | Hate speech by another name: Why the term ‘alt-right’ should not be legitimised, Celeste Liddle, The Age, November 28, 2016 | Keyboard warriors of the alt-right have Australia in their sights, Daniel Flitton, The Sydney Morning Herald, November 26, 2016 | Calling them “alt-right” helps us fight them, Matthew N Lyons, Three Way Fight, November 22, 2016 | SPLC on Alternative Right. Note that for a very short period, the UPF media page touted itself as ‘The Offical AltRight of Australia’.

3 Responses to antifa notes (december 2, 2016) : jewsagainstfascism ~versus~ One Nation Party