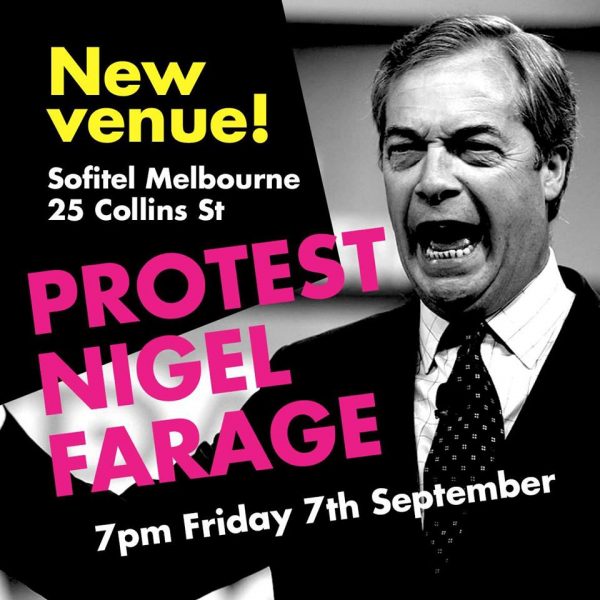 The final leg of Nigel Farage’s blitzkrieg tour Down under takes place at the Sofitel Hotel (25 Collins Street) later today.

The Campaign Against Racism & Fascism (CARF) has organised a protest outside the venue. For more details and to keep up-to-date with what’s up, see the Facebook event page here. 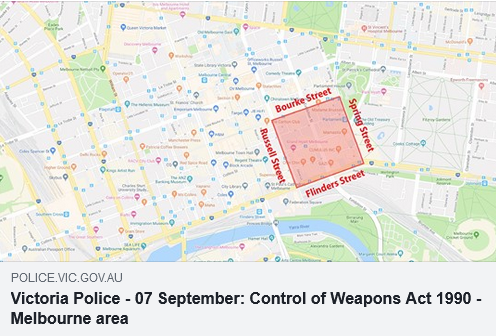 To this point, ticket sales appear to be somewhat disappointing for organisers, with the original Sydney venue (September 6), the International Convention Centre (which previously played happy hosts to some barking-mad anti-Aboriginal hate-speech courtesy of Stefan Molyneux and Lauren Southern) being pulled and the event taking place at Doltone House instead. This parallels the experience in Adelaide — where it was marketed as being at the Town Hall but with attendees being directed to a smaller venue a short distance away — and so too Perth.

To add to the tour organiser’s woes, there’s been a falling out between Damien Costas and Max Markson, the dynamic duo responsible for bringing Nesquik to town in December last year. Thus:

… the party has suddenly come to a spectacular halt and the “bromance” is over amid wild accusations on both sides and a trail of debt, with Mr Markson claiming Mr Costas owes him $90,000.

Maybe 200 or so folks staged a rally outside the Sofitel; a handful were arrested. Cooked Convict Neil Erikson was detained by police, Rino ‘Bluebeard’ Grgurovic lost his MAGA hat, and their mate Andy Nolch (see : Anti-feminist charged over Eurydice Dixon graffiti has ‘no remorse’, court hears, Tammy Mills & Sarah Emery, The Age, September 8, 2018) was also there to be entertained by Farage.