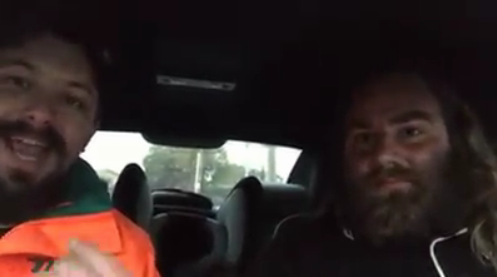 Yeesh — I was wondering how Old Mate’s trial was going (see below).

Note that, while others have abandoned this 110% True-Blue Dinky-Di Aussie Patriot™ — including, sadly, his comrades in the ‘True Blue Crew’ — the silly old bugger Mike Holt has been one of his few public defenders. As I noted in November last year:

According to the OAP, Phil Galea, Australian patriot, was arrested and accused of being a terrorist in August 2016 after he followed and filmed ANTIFA terrorist thugs at their headquarters. The police allege that he had “bomb making materials”, but Phil denies this and says he can prove why he had the chemicals for peaceful scientific experiments.

More recently (November 16, 2017), Mike published a letter from Galea about a dead patriot called Shannon Wallace, in which Phillthy speculates that Wallace may have suffered an ‘unnatural’ death (possibly murdered by use of a ‘sonic gun’?). In early 2016 I visited Shannon Wallace in what was called The Compound by him and his father, writes Phil, before providing a garbled account of various persons and events and identifying Darren Norsworthy (PDLA and ‘Battalion 88’) and ‘Aaron’ [Dekeulenaer, presumably; a nazi dork from Ballarat associated with PDLA, ‘Battalion 88’ and RWRAU] as police informants. Phill also writes:

If I was murdered (or had an “accident”), Shannon was to use an internet café to sign into my e-mail account and send Blair Cottrell (UPF), Mike Holt (Restore Australia), and Liz Sheppard (Reclaim Australia) all of my recordings from a fake account. Then Shannon was to use the Linux computer I had given him to make dozens of copies of the discs and hand them out to all True Blue Crew Members who were on a list I had given him when he went to the Melton anti-mosque rally. Then he was to hand the discs directly to the press as well.

And so on and so forth …

See also : Will the Alt Right Produce the Next Timothy McVeigh?, Alex Reid Ross, AlterNet, November 27, 2017 (‘The history of white nationalism suggests we could be entering a period of violent upheaval’).

A man who planned to carry out terrorist attacks on three Melbourne targets intended to recruit people by handing out information on how to make explosive devices, prosecutors allege.

Phillip Galea of Braybrook, in Melbourne’s west, was charged in 2016 with planning to commit a terrorist act and collecting material in connection to a terrorist act.

On the first day of Mr Galea’s committal hearing, prosecutor David Staehli alleged there was electronic material showing Mr Galea was targeting the Melbourne Anarchist Club in Northcote, the Resistance Centre in the CBD, and Trades Hall in Carlton where Mr Galea collected intelligence and conducted reconnaissance.

Mr Staehli said Mr Galea wanted to produce what he called The Patriots Cookbook, which would show how to make smoke bombs and metal bombs by using potassium nitrate “for the advancement of extreme right wing ideology to overcome the perceived Islam-isation of Australia”.

The court heard authorities raided Mr Galea’s property in 2015 and found 361 grams of mercury, along with video clips on how to make explosives, and instructions on manufacturing mercury as a precursor to explosives.

Prosecutors also said they found footage of Mr Galea performing a reconnaissance mission at the Resistance Centre in September 2015.

‘He started to talk about chopping people up’

Witness Heidi Martin told the hearing she met Mr Galea through a right wing rally in Canberra and they met up again in Geelong in 2015 with other people when creating the Facebook group, the Greater Geelong Patriots United.

The pair met again with three other people not long after to break away from the group and create their own page, Reclaim Australia Victoria Incorporated.

She became the editor of the new page but told the court members of the group became uncomfortable with posts Mr Galea was putting up.

“He had a particular focus on church burnings. He was starting to talk about chopping people up, which is certainly not in line with anyone’s beliefs,” she said.

“It was a matter that was quite alarming and concerning and you’ve got someone talking about doing something that could harm the community.”

She said she spoke with a number of other members about her concerns.

“We were mainly talking about things that Phil had told [me] which were alarming things. Things that would send shock waves through anyone,” she said.

Ms Martin told the court a man involved in the group, Greg Burton, had been asked by Mr Galea to edit documents that were going to form The Patriots Cook Book, and he was horrified at what he read.

“There was stuff about torture techniques,” she said.

Mr Galea is in custody.

An accused far-right extremist spoke often about bombing two left-wing groups in Melbourne and said any innocent bystanders hurt would be “casualties of war”, an associate says.

Phillip Galea is charged with making preparations for terrorist attacks on the Melbourne Anarchist Club and Melbourne Resistance Centre between November 2015 and August 2016.

The 33-year-old is facing a committal hearing in Melbourne Magistrates Court to determine if there is enough evidence for him to stand trial.

Darren Norsworth, who was associated with Galea through right-wing group Reclaim Australia, gave evidence on Monday, saying he first believed he was only joking about bombing buildings[.]

But Galea kept going on about it and the way he spoke gave the impression he was serious, Mr Norsworth said.

“I said if you blow up the buildings innocent people walking past would get hurt,” Mr Norsworth told the court.

“That’s what made made me click and think this guy is bloody nuts.

“I couldn’t turn a blind eye.”

“Any chance he got he would go on about this stupid cook book,” Mr Norsworth said.

“One of the things he had was how much battery acid to inject into a leftie.

“He thought it was important to show the right wing how to hurt the left.”

Mr Norsworth said Galea had also obtained blueprints of the buildings he was allegedly planning to bomb.

Galea is also charged with collecting or making documents to prepare for terrorist acts between September 2015 and August 2016.

His mental state was previously examined to determine if he was fit to stand trial and in February the courts deemed him to be fit.

Galea has been in custody since August 2016 and his committal hearing continues.