The (neo-Nazi) Lads Society : Blair Cottrell’s pro-tip : Wear Your Swastikas On The Inside

A problem for the Australian antifa, and indeed for anti-fascist groups in Europe and the US, is that few people and organisations they oppose here have much to do with Nazism. ~ Chip Le Grand, Antifa Australia goes for the jugular, The Australian, December 9, 2017

For those of you coming in late, ‘The Lads Society’ is a relatively new grouping on the radical right which evolved out of the now-defunct ‘United Patriots Front’ (UPF). Spearheaded by ex-UPF fuehrer Blair Cottrell and his sidekick Tom Sewell, ‘The Lads’ opened a social centre in the Melbourne suburb of Cheltenham last year, have another in Sydney, and would appear to be keen to expand the franchise to Brisbane and other major cities.

Most recently, ‘The Lads’ — membership of which overlaps with ‘Antipodean Resistance’ — were hired by Axiomatic Events to provide security for Stefan Molyneux and Lauren Southern during their speaking tour. This fact went completely unmentioned in media reportage of the tour, as did the fact that when the Lads and members of the racist gang called the ‘True Blue Crew’ (TBC) organised a meeting in January to discuss the formation of vigilante squads to hunt African youth, they did so at the Lads’ clubhouse in Cheltenham.

Sadly, this is about par for the course for Australian jernalisms on the extreme-right, with the only article on the group appearing in June (Far right nationalists open private men-only clubs in Melbourne and Sydney, Rebecca Puddy, ABC, June 7, 2018) but with scattered references to the Lads’ participation in Sydney Watson’s ‘March for Men’ last month, an invitation the crackpot ‘Australian Jewish Association’ extended to Southern and the Lads to tour Bondi and Caulfield and, prior to this, members of The Lads Society in Sydney addressing a nationalist rally by the TBC in NSW. Note that: a) the TBC has been one of the most outspoken defenders of the neo-Nazi Lads and; b) its primary Facebook page has recently closed. 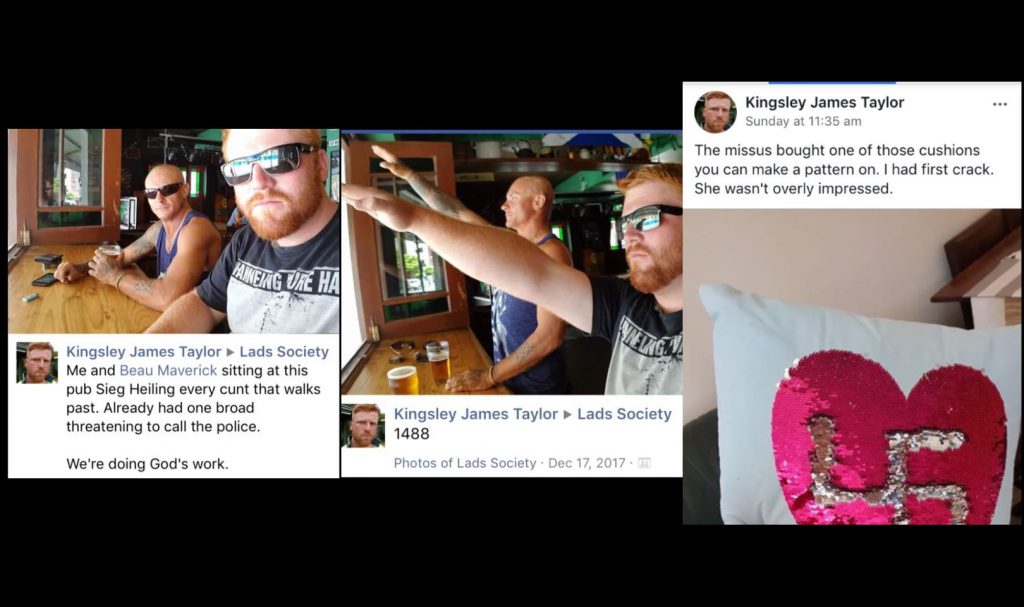 In any case, last week a new page appeared on Facebook: LadsLeaks LadsLeaks. The small amount of material thus far uploaded to the page revolves around two Lads — ‘Kingsley James Taylor’ and ‘Beau Maverick’ — being kicked out of a bar in Brisbane after making Nazi salutes, and then later one of them being detained (for unknown reasons, but presumably related to their Nazi behaviour at the bar) by police. The video appears to date from December 2017.

In and of itself, a pair of neo-Nazis acting like arseholes is not especially noteworthy; however, it’s the angry reaction of Der Fuehrer, Blair Cottrell, to this open display of neo-Nazi beliefs that’s most telling. Thus, after informing the Lads that his recent absence from the group’s activities is because he’s been fucking a lot of women, Cottrell makes it plain that such imagery is Bad.

Why? Well, according to Cottrell …

… from what I’m seeing, everyone’s doing nothing but praise them for it. Oh, good on them. Oh, the problem is society, the problem’s not us: we know the truth. Society are the ones who are bad. We’re good, so we’re gonna run around Roman-saluting people. Tell me, what was your goal? When you’re sitting in a fucking pub or you’re going into a public place, what’s your goal when you Roman-salute people and say Sieg Heil? What’s your fucking point? What are you trying to achieve? Come on, give it to me, give it to me in the comments. Tell me how that’s practical and what the fucking purpose is. Give it to me. Oh you’re raising awareness for the cause? What the fuck does that mean?

I’ll tell you what you wanted, I’ll tell you what your purpose was. You wanted to stir people up. You wanted to go out and stir some fucking peasants up. And you did stir ’em up. And then when they got stirred up, they called the police. And then you cry victim. Oh, we didn’t do anything wrong. Whoop-di-fucking-do. What did that achieve? And then you’ve got somebody else on the page saying Oh, I’m a fucking skinhead, I have been for fifteen years. Now full respect to you, I don’t care what you do with your life. But trying to tell everyone else that they’re basically a … or to subordinate themselves to you, because you’re more experienced and you — quote unquote — earned your laces: what the fuck does that even mean? And you have done time for the cause? You’ve done time because you beat up some Pakis, probably. And is that what you want for us, for us to beat up some people who aren’t white, to earn our laces? You know, is that your plan? To bash some people who aren’t white, to do some jail time and then finally we can be considered highborn skinhead neo-Nazis? Really? Is that your plan to win the hearts and minds of the people? That’s a good fucking plan, well done. Cocksuckery! And why is everyone sticking up for it? Why am I the only one speaking sense? Jesus Christ! You start a new organisation, you get guys putting their balls on the line, putting a lot of money into this fucking club, into this new group, putting a lot of their labour into it, dedicating themselves to it, believing in it, and then someone sticks their big fucking red-lace skinhead boot in and says fuck you all, let’s go do some jail time, let’s earn our laces, let’s go Sieg Heil people in the street, that’ll get us some new members! Fucking clue on to it dickheads, Jesus Christ, is anyone gonna say anything … ?

Fucking LARPers? Fucking oath they’re LARPers! We had one at the club last night. Now I don’t know if he’s in this group, I don’t know if he’s watching me now, but I don’t give a fuck, I can’t remember his name. But he was respectful of me, said Oh I love what you’re doing, I love the approach that you’re taking. But then later on, he was having a conversation — this guy who either was a skinhead or still is, I don’t fucking know — he was having a conversation with one of our newest members, who’s just a Christian; that’s it. He doesn’t know that much — I don’t think he does anyway — but he’s a good guy, and he’s open to sensible conversation. And this former or current skinhead guy, whatever he is, wants to start a fight with him, because he doesn’t know about the Jews, so let’s beat him up! Great fucking solution! Wow, how’d you think of that, fuckhead! Jesus fucking Christ! He ended up having to fuck off. I’m surprised that Christian kid stuck around, but he was good enough to.

Seriously, just to wrap it up, too, just to wrap it up, the last fucking thing I’ll say is, do you really think that, if Adolf Hitler rose from the grave, if his spirit descended and stood beside you, put his hand on your shoulder, and he surveyed your jackboots with your red laces, and your fucking swastika tattoos, and your abrasive, fuck-the-world attitude, your little syndicate-separatist cult, do you really think he’d be proud of you? Do you really think he would say you’re a true national-socialist, well done? Do you think the man who said all great movements are popular movements and one must adjust himself to the times would be proud of you, would believe in you? Get a fucking clue! Anyway, suppose I’m just venting a little bit but, I reckon some of you needed to hear this. And don’t reply to this video with oh fuck you, you don’t know what you’re talking about, you’re the new guy on the block, we’re the real deal, you’re a poser, whatever the fuck you people say, don’t reply to me with that shit, take on some constructive criticism, yeah? Take it on board. Be a fucking man, take some criticism, on the fucking chin, and think, fuck maybe he’s right, maybe this guy’s got a plan, maybe he can sorta see what’s gonna happen in the future and maybe he’s trying to do the best that he can for this group, you know?

So yeah — here’s my two cents.

Another video features imagery of the Cheltenham bunker, taken at its opening in October 2017, overlaid with a Nazi marching song, ‘Erika’, by the Nazi composer Herms Niel. Funnily enough, James Buckle, one-time President of ‘Firearm Owners United’, confirms his membership of the group in a comment on the video: 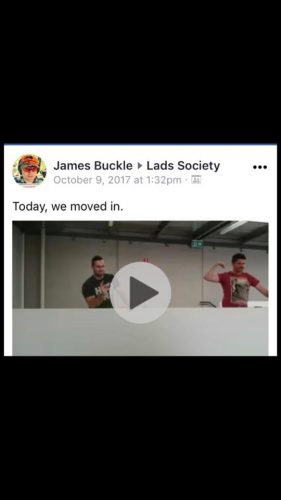 The Lads — Tom Sewell and Stuart Von Moger — celebrate the opening of the Cheltenham clubhouse with some fitting Nazi muzak:

Mister Cottrell discusses a proposal by Matt Doran of Channel 7’s Sunday Night to work together to create a segment on The Lads and their important work fighting African street crime. Mister Cottrell states that he was paid several hundred dollars by Channel 7 for the inconvenience. Sadly, the segment appears not to have been completed.

2 Responses to The (neo-Nazi) Lads Society : Blair Cottrell’s pro-tip : Wear Your Swastikas On The Inside