Above : On L, alleged killer Robert Bowers announcing his intention to GTKRWN; on R, Brisbane-based neo-Nazi and member of The Lads Society Beau Maverick. Neither man cares greatly for ‘optics’.

* The massacre at the synagogue in Pittsburgh on October 27 was reportedly the worst such event in US history. Unfortunately, given current political trends, that record may not last very long. In any case, Julie Nathan of the ECAJ has written ‘As the Pittsburgh synagogue massacre shows, fears of “White Genocide” are incitement to murder’ (ABC Religion & Ethics, October 29/31, 2018), while CEO Alex Ryvchin reckons ‘Synagogue slayings not a shot in the culture wars’ (October 31, 2018 — for a contrary view, see : Jews Against Fascism).

I may add some more thoughts at a later date, but in the meantime I think it worthwhile highlighting the fact that the rehabilitation of anti-Semitism and its increasing centrality to extreme-right perspectives in the United States is echoed Down Under as an increasingly larger segment of younger right-wing activists not only adopt a fascist outlook but place anti-Semitic conspiracy theories at the heart of their worldview. By way of example, the AltRight media platforms ‘XYZ’ and ‘The Unshackled’ (AKA ‘The Unhinged’ — which, to its credit, has been authorised by Google as a trusted media source) — have drifted over the course of the last year or two from fairly conventional arch-Toryism to an open embrace of white nationalism. Leaving aside David Hilton (‘Moses Apostaticus’), fellow XYZ contributor Ryan Fletcher has accounted for this shift in an essay titled ‘Trading HEMP for Hitler’ (a text which comes highly recommended by editor David Hiscox). Fletcher is also a YUGE fan of James Mason’s Siege — required reading for members of local neo-Nazi grouplet Antipodean Resistance. 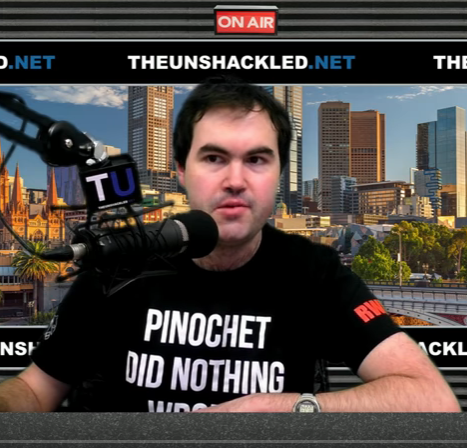 Above : Tim Wilms of The Unhinged wearing his Proud Boys ‘Pinochet Did Nothing Wrong’ shirt. Note that the arm reads RWDS (‘Right Wing Death Squad’). Under the Pinochet dictatorship (1973–1990), tens of thousands of Chileans were raped, tortured, murdered and forced into exile by his death squads. (Coincidentally, this weekend, LASNET has organised a gathering on Autonomy & Resistance at Trades Hall in Melbourne.)

Queensland businessman Dan Spiller (AKA ‘Future Now Australia’ AKA ‘AE Events’) has recently announced the cancellation of the upcoming tour by Infowars-supplements salesman and paedophile apologist Milo Yiannopoulos (accompanied by fellow wealthy blabbermouth Ann Coulter). This is the second time Spiller has tried and failed to organise a tour by ‘foreign radicals’: back in April, Spiller announced that he’d be bringing both Yiannopoulos and ‘Proud Boys’ founder Gavin McInnes to Australia. That effort collapsed in a heap within a few days, but Spiller’s latest production took several months to fall apart … which I suppose could be considered either an improvement or a degeneration (depending on your perspective). In any (non-)event, the decision to cancel the tour has been compounded by Spiller’s decision not to refund buyers but instead offer them tickets to go and see two other ‘foreign radicals’ — Gavin McInnes and Stephen Yaxley-Lennon — when they tour in December.

Fingers crossed, Mr Spiller’s seemingly chronic inability to successfully profit from foreign hate-merchants will not deter him from attempting to do so and being similarly adept in future. The silver lining on this grey cloud of failure, however, is perhaps the new book by Milo, which is apparently All About Australia: 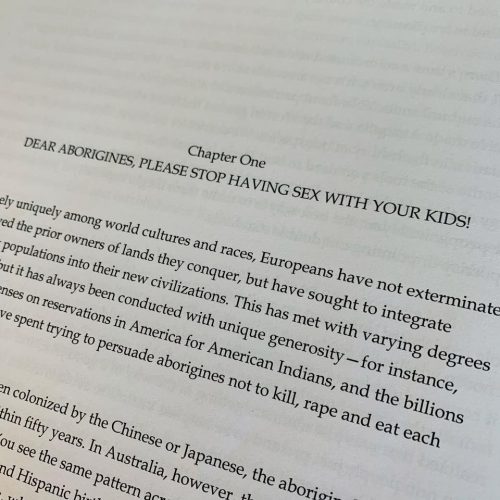 Above : An extract from Yiannopoulos’s upcoming book on Australia. It’s unclear at this stage if Janet Albrechtsen has accepted an invitation to write the foreword.

Damien Costas, publisher of Penthouse Australia, is planning on bringing Proud Boys founder Gavin McInnes and ex-BNP member and founder of the English Defence League Stephen Yaxley-Lennon (AKA ‘Andrew McMaster’/’Paul Harris’/’Tommy Robinson’) to Australia in December. As usual, venues will be made public 24 hours prior to the event, but it’s not unreasonable to expect previous venues, including Festival Functions in Findon (Adelaide), Perth Convention and Exhibition Centre, Melbourne Pavilion in Flemington/La Mirage in Somerton, Brisbane Convention & Exhibition Centre and Le Montage/International Convention Centre Sydney (ICC Sydney) to again provide a platform for race-hate. The dates for the tour are as follows:

Of course, the possibility of either McInnes or Yaxley-Lennon being able to enter the country is entirely dependent upon Mr Potato Head’s feels on the subject. On Robinson, and in particular his current legal troubles (which may also see him prevented from coming), see : David Renton and Barrister Blogger.

With regards McInnes, he and his ‘Boys’ have been getting into some bother of late. Just a few weeks ago (Friday, October 12) in New York, McInnes was invited by the Metropolitan Republican Club to celebrate the anniversary of the assassination of Japanese socialist Inejiro Asanuma on this date in 1960. Following the event, some of McInnes’s fanboys went on a bit of a rampage, and some got arrest. An awful lot of ink has been spilled on the subject of the event and its aftermath, but as ever New York City Antifa (Twitter) is an xclnt resource. See also : The Proud Boys, The GOP And ‘The Fascist Creep’, Christopher Mathias, Huffington Post, October 18, 2018 (‘Gavin McInnes spoke at a GOP club, then his followers violently attacked leftist protesters. Modern American fascism finds its foot soldiers’) | NYPD arrests 14 Jewish protesters outside Republican club where Proud Boys brawled, Rex Santus, Vice, October 31, 2018 (‘The protesters outside the Club on Tuesday were there to call on the Republican Party to denounce white nationalism after the Saturday shooting at a Pittsburgh synagogue where 11 worshippers were murdered by a man who’d shared anti-Semitic and white supremacist comments online.’).

Closer to home, Melbourne lawyer Nyadol Nyuon has launched an online petition, calling on the Minister to deny McInnes a visa. For their part, both Facebook and Instagram appear to have removed a large number of (official and unofficial) Proud Boy accounts from their sites. ‘The crackdown came slightly more than two weeks after members of the group reportedly attacked and beat activists protesting at an event in Manhattan. It also follows the massacre of 11 people at a Pittsburgh synagogue — the worst anti-Semitic attack in recent US history.’ The gab.ai webshite (AKA ‘Twitter for nazis’) is also experiencing technical difficulties at the moment … 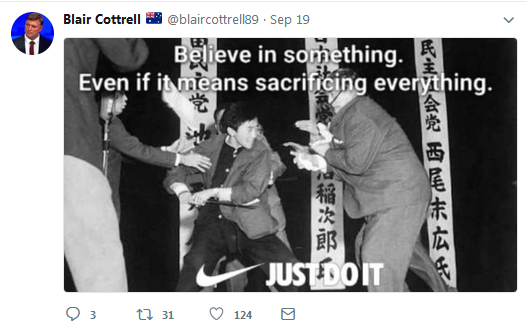 See also : Australia should be wary of the Proud Boys and their violent, alt-right views, Kaz Ross, The Conversation (ABC), October 30, 2018 | Proud Boys Founder Gavin McInnes: ‘We Need More Violence from the Trump People’, gritpost, October 18, 2018 | The New Nazis: How the meme-rich world of the internet is a threat in Australia, Kaz Ross, ABC, October 14, 2018.

The recent revelation that the Young Nationals in NSW have been targeted for infiltration by neo-Nazis and White supremacists created some mild embarrassment for the party over the course of the last few weeks. On Wednesday, it was announced that 15 members of the party — including Thomas Brasher, Michael Heaney, Clifford Jennings and Oscar Tuckfield — had resigned, while something like another 20 have had their membership status questioned, and may yet leave or be forced out of the party. See : Nationals members resign en masse amid investigation into neo-Nazi ties, Michael Koziol, The Age, October 31, 2018 | Young Nationals resign after after ABC investigation reveals alt-right push, Alex Mann, ABC, October 31, 2018.

On Monday the story — the origins of which may be traced back to some reportage in The Australian back in May, but which was given flesh by Alex Mann for the ABC — provoked the following front-page treatment in The Daily Telegraph: 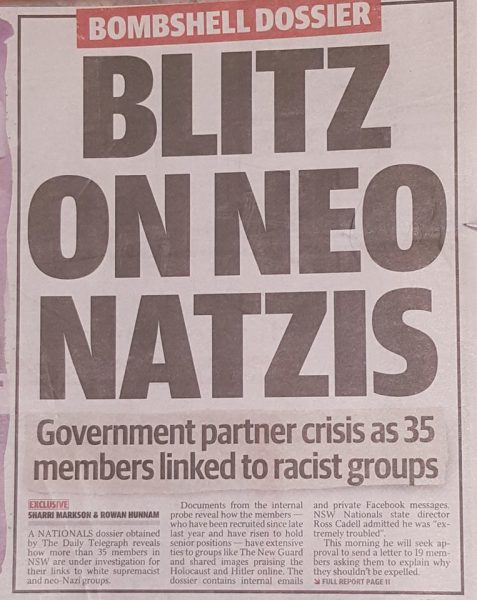 Oddly enough Sharri’s father, Max Markson, has been doing his bit to promote racism and fascism in Australia by way of Penthouse and in his capacity as Milo’s Australian publicist. Sadly, the relationship between Costas and Markson has broken down in the wake of the paedophile apologist’s December 2017 tour: ‘ … Mr Markson called Mr Costas a “lying conman”. Mr Costas, the publisher of Penthouse Australia and owning a company alongside one of Australia’s biggest drug dealers, convicted ice importer Sean Dolman, retaliated by calling Mr Markson “a very naughty boy” who “had his finger in the till”‘ (Private Sydney: Markson sparks up in court in dispute with Penthouse publisher, Andrew Hornery, The Sydney Morning Herald, September 6, 2018).

As noted a year ago, the neo-Nazi grouplet ‘The Lads Society’ has a clubhouse in the Melbourne suburb of Cheltenham. The nazis also have a training facility in Sydney, which is located at 34 Thomas Street, Ashfield. The Lads certainly have a sense of humour, with the lease on the property being signed with Colemon Property Group on Hitler’s birthday (April 20).

The chief organiser of ‘The Lads’ in Sydney is a Kiwi called ‘Mark McDonald’. Previously, Mark was the lvl boss of another short-lived neo-Nazi grouplet called ‘Squadron 88’. It attracted some media attention by way of stuffing letterboxes in Jewish areas of Sydney with anti-Semitic tracts. McDonald is also widely-believed to be responsible for the distribution of some racist posters in Sydney in mid-2017. Most recently, McDonald and several other Lads attended Adelaide barrister John Bolton’s batshit rally in Wiley Park:

Above : Partially-obscured, joining Cottrell on the right is Adelaide barrister John Bolton; standing between Cottrell and Tuckfield is Mark McDonald, founder of defunct neo-Nazi grouplet Squadron 88 and current lvl boss of The Lads Society in Sydney.

Finally, ladsleaks has published an interesting discussion drawn from The Lads’ private Facebook page. The list of participants in the discussion reads like a Who’s Who of neo-Nazism Down Under, including both founders Blair Cottrell and Tom Sewell, Mark McDonald (‘Tyler Winchester’) and Stuart Von Moger, David Hilton (‘Moses Apostaticus’), Jim Perren (Australia First Party/’Whitelaw Towers’/United Patriots Front), Welf Herfurth and more. Much of the discussion revolves around The Lads’ shared hatred for Jewish neo-Nazi Nathaniel Jacob Sassoon Sykes. Based in Sydney, Sykes was until a few years ago a prolific contributor to the world’s leading neo-Nazi webshite ‘The Daily Stormer’. A member of the Australia First Party, Sykes uses his blog ‘United Nationalists of Australia’ to take aim at the party’s rivals on the right — including, of course, The Lads.

The post which triggered Tom can be read here — I’ll post other commentary from ladsleaks here laters.

• Guns, fascism, infighting and couch-surfing: Researcher Serena Tarr recounts a year studying the alt-right, Emma McClatchey, Little Village, October 8, 2018;
• Here Is a List of Far-Right Attackers Trump Inspired. Cesar Sayoc Wasn’t the First — and Won’t Be the Last., Mehdi Hasan, The Intercept, October 28, 2018;
• We Must Pressure Mainstream Forces to Stop Downplaying the Far Right, Spencer Sunshine, truthout, October 29, 2018;
• Three Months Inside Alt-Right New York, Jay Firestone, Commune, Fall 2018 (‘An undercover antifascist descends through all nine circles of the alt-right inferno.’);
• Twilight of the Racist Uncles: How Facebook is melting the minds of our elders, Ed Burmila, The Baffler, October 30, 2018;
• After Last Week, There’s No Hope That the Media Will Ever Abandon False Equivalencies With the Far Right, Natasha Lennard, The Intercept, October 31, 2018;
• Engedaw Berhanu Remembers His Nephew—Brought to Portland, Then Forever Lost, Jason Wilson, Willamette Week, October 31, 2018;
• Punching On With Patriots: How To Tackle Gavin McInnes And His Proud Boys’ Promise of Violence In Australia, Tom Tanuki, New Matilda, October 31, 2018.