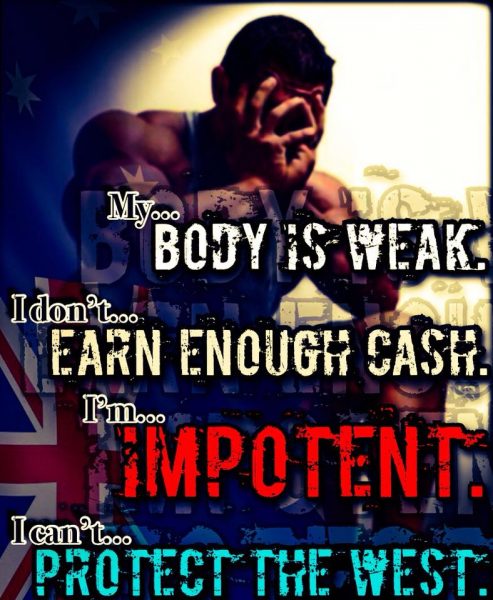 The ability of the ultra-nation to have connotations both of a regenerated nation-state and of a reborn civilization or race, sometimes simultaneously, gives this component of the central fascist myth, or ‘fascist minimum’ — what the theorist Michael Freeden would call its ‘ineliminable core’ — particular flexibility and affective appeal in the context of palingenetic longings at the time of crisis. As an emotive force, and as a source of identity and purpose, the strength of fascist ideology often lies in the nebulousness and utopian quality of its vision, not in its practicality or realizability. Thus the fact that fanatically patriotic neo-fascists from different countries may attend international rallies […] or conferences […] is a paradox, but certainly no contradiction.

The fascist ultra-nation can be envisaged as a supra-individual product of the fascist imagination which can partake of aspects of both the historical ‘motherland’ and ‘fatherland’, but also of mythicized historical and racial pasts and future destinies. It provides the mythic focal point for the fascist to feel part of a supra-personal community of belonging, identity and shared culture (whether based on history, language, territory, religion or blood, or a mixture of several such components). It is into this mystic entity that the individual is encouraged to submerge his or her tormented, angry, disoriented self entirely, thus dissolving it into an ‘identificatory community’ rather than forming part of an ‘integrative community’, one which respects the difference, individualism and humanity of ‘the Other’. In some respects, the ‘ultra-nation’ also takes on aspects of the Judeo-Christian God: it lives both in and through the unfolding of historical time and, contemporaneously, in the supra-historical eternity of the people or race. Moreover, in extreme situations — when the ‘motherland’ is threatened or the ‘fatherland’ commands it — it may demand love, commitment and suffering from the faithful literally to the point of the ultimate sacrifice, thus making their life holy through death while further sanctifying the ultra-nation.

On a psychological level, identification with the ‘ultra-nation’ can thus serve as a portal to transcendence for individuals whose personal lives have been shattered by socio-political and economic upheavals that threaten their core identity as individuals, or whose inner lives might otherwise be experienced as devoid of purpose, meaning and hope because of the personal crises they are experiencing. Heroic service to this supra-personal entity enables them to enter its highly mythicized story, its history, and perhaps fleetingly know directly the sensation of redemption and immortality evoked in the sacred texts and rituals of military burial and commemoration ceremonies dedicated to fallen soldiers all over the world. It should be noted, however, that the two world wars proved that, at times of national danger, even liberal democratic nation-states can develop intense, elaborate and at least partially spontaneous political religions centred on the moral imperative of individual ‘blood’ sacrifice to the national community. The difference is that liberal societies do not abandon civil nationalism and political liberalism as the basis of the ideal social order to which life should return after the crisis. In contrast, fascism sees the sacralized nation that may emerge under democracy in extremis at a time of national emergency and war not as an exceptional state, but as the inauguration of a new societal norm. Where liberal constraints were removed in the 1930s and 1940s, fascism attempted to engineer a sustained climate of extreme patriotism, reinforced in some cases by terror, which demanded the selflessness and sacrifice of a whole generation as the precondition for the replacement of ‘sick’ liberal democracy by a ‘healthy’ totalitarian new order inhabited, once the wars were over, by a socially engineered population of believers purged of theological, humanist or individual conscience.

It is implicit in this account that, following an early modern tradition of conceiving the subjects of a regime as constituting a ‘body politic’, whether autonomously self-regulating (as posited by Francisco Suárez) or created from above (as proposed by Thomas Hobbes), the fascist imagination turns ‘the people’ into an intrinsically anti-democratic and anti-egalitarian, organic entity signified by such words as ‘Volk’ (German), ‘volk’ (Dutch), ‘narod’ (Croatian) or ‘poporul’ (Romanian). However, it is important not to infer from this that fascism is inherently biologically or genetically racist. Certainly, any organic concept of the nation is intrinsically racist in the way that it tends to treat ethnicities or nationalities as idealized singular entities which are threatened by miscegenation (ethnic mixing), mass migration, cosmopolitanism, materialism, individualism or absorption into international bodies. Yet, as will become apparent […] the ultra-nation of the fascist political imagination is not necessarily racist in biological, pseudo-scientific, or eugenic terms. Nor is it necessarily obsessed with ‘blood-lines’, racial purity or heredity. Nor is it necessarily ‘eliminationist’, or genocidal in the manner of Nazism, the Iron Guard, or the Ustasha, in its treatment of other nationalities, ethnicities and out-groups.

From what has been said earlier about the way the fascist ‘ultra-nation’ is not necessarily equated with the nation-state, it is also clear that fascist ultranationalism does not preclude tactical alliances being forged with other ultranationalisms in a common supranational cause to fight the same international forces of ideological hostility or decadence held to be destroying the organic nation. Ultranationalism, despite its primary stress on the need for national or racial palingenesis, can thus acquire an important international or transnational dimension beyond narrow cultural, linguistic and ethnic divides, a fact being increasingly recognized by fascist studies.

I live in Melbourne, Australia. I like anarchy. I don't like nazis. I enjoy eating pizza and drinking beer. I barrack for the greatest football team on Earth: Collingwood Magpies. The 2021 premiership's a cakewalk for the good old Collingwood.
View all posts by @ndy →
This entry was posted in Anti-fascism, History, State / Politics and tagged fascism, Roger Griffin, ultra-nation, ultra-nationalism. Bookmark the permalink.