2) smdh — Despite Daniel S being a YUGE fanboy of his, Milo Y has also apparently cancelled his virtual appearance. It also appears that Neil E may not be speaking (though not because he’ll be in prison or in violation of his bail conditions).]

In May, a Queensland-based businessman named Daniel Spiller has organised a series of events titled ‘Conservative Forum 2018’, which promises to ‘take you on a journey with music, entertainment and inspirational speakers’. Scheduled to take place in Brisbane (May 4), Sydney (May 10), Melbourne (May 19) and Perth (May 25), the list of speakers is rather short: ex-One Nation Party turned independent Tory MP Fraser Anning, ex-Tory MP and Sky News blabbermouth Ross Cameron, Milo Yiannopoulos (via a livefeed) and er, convicted racist and stalker Neil Erikson.

Not speaking will be New-Yawk based Gavin McInnes, founder of AltRight groupuscule ‘Proud Boys’. Though initially promoted as a speaker (also via livefeed), McInnes has stated that he will not be participating in this world-historical event. This decision has not been received well by keynote speaker Neil: 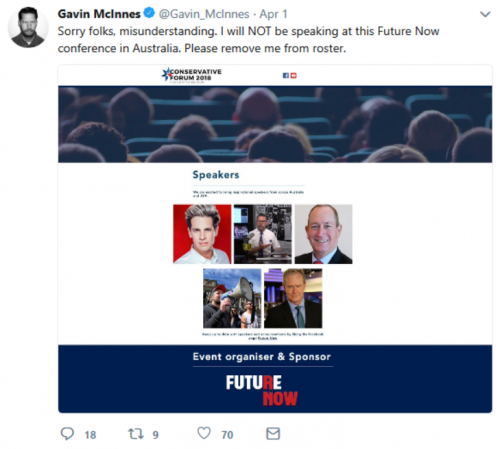 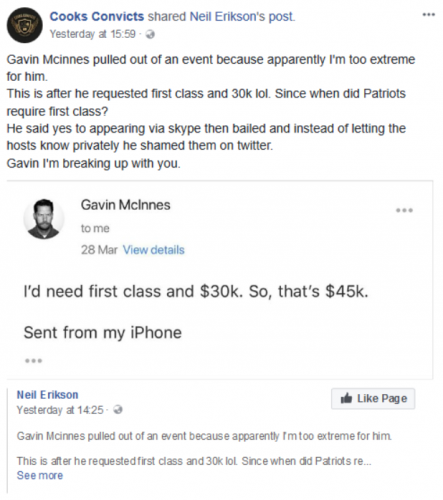 Otherwise, Daniel and the Conservative Forum (organised under the auspices of some thing called ‘Future Now’) embrace all the usual tropes: Africans, Islam, Multiculturalism and Political Correctness are Bad; Colonialism is Good; Feminism is Cancer; Homosexuality is Pathological; ‘Steve Irwin Predicted Apex’.

Daniel also came into bat for Neil when TOLL took him to court. 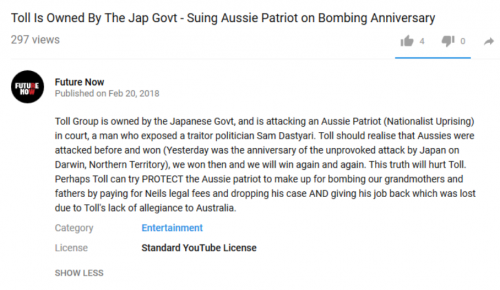