Nick Folkes’ micro-‘Party for Freedom’ (PFF) has undergone some settling of contents over the course of the last few months. Gone is George Jameson and Penny Louise/Tridgell, along with a number of PFF placards, which George has apparently refused to return to Nick. The placards made a brief appearance at a ‘True Blue Crew’ (TBC) anti-Muslim rally in Belmont on February 24. (Note that, in reality, it appears as though there is no application before the local council for the construction of a new mosque in the area.) Incensed by this traitorous act, Nick has been going off on Facebook, taking aim not only at George and Penny but also the TBC (in both NSW and VIC), the Australia First Party, its leader Dr Jim Saleam (who he accuses of playing spin-the-bottle), and one of Jim’s QLD-based flunkeys, Jim Perren (who notably helped organise the United Patriot Front’s (UPF’s) doomed party launch in Toowoomba in February 2016 — describing it as ‘a Nuremberg rally minus the swastikas’). Oh, he also accused Melbourne local Paul ‘Guru’ Franzi of drug abuse(!), and more besides. Further, Nick’s sidekick Toby Cook has recently gone full Nazi, and the day after the TBC rally in February attended Jura Books, where he and two others — Matt Lowe and Christopher Grantham — proceeded to make arses of themselves. To top it all off, Nick invited valour thief and serial pest Ralph Cerminara to act as mediator between the TBC methgoblins and whatever remains of the PFF in Sydney in order to arrange the return of the preciousss to Nick.

In any event, here’s a sampling of the sparkling prose coming from the patriotik camp: 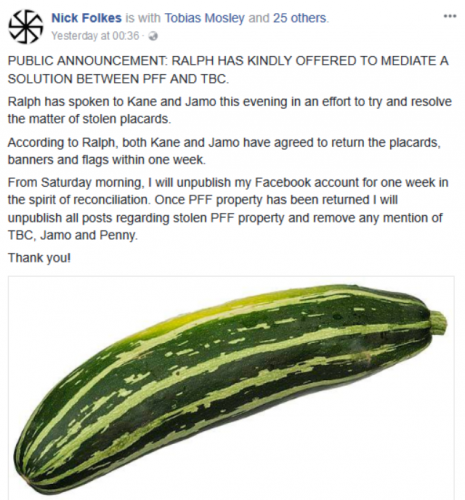 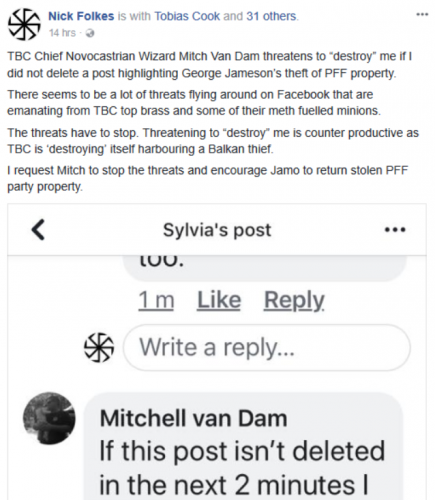 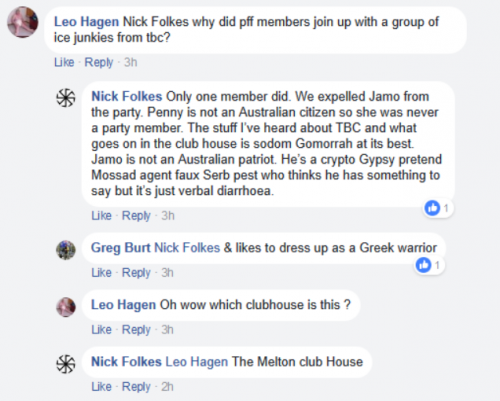 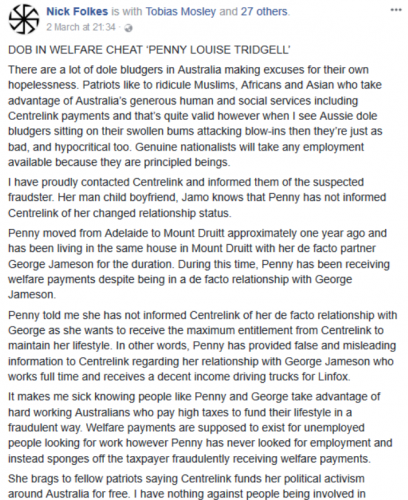 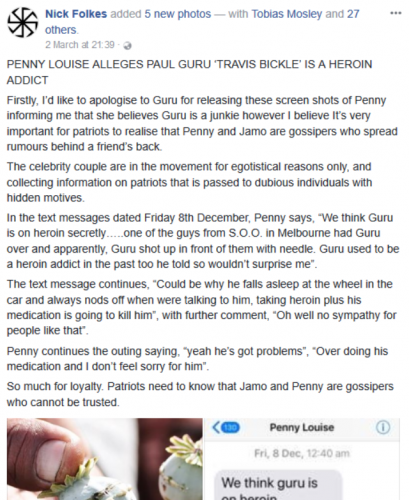 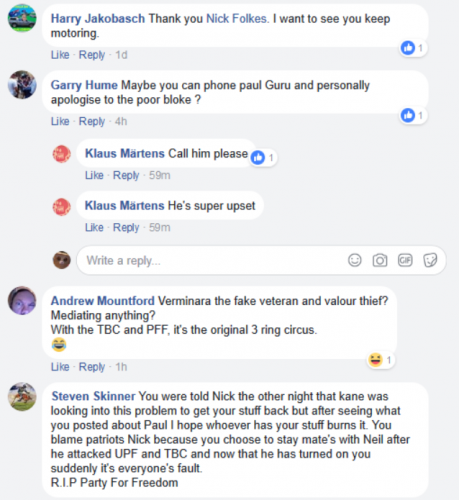 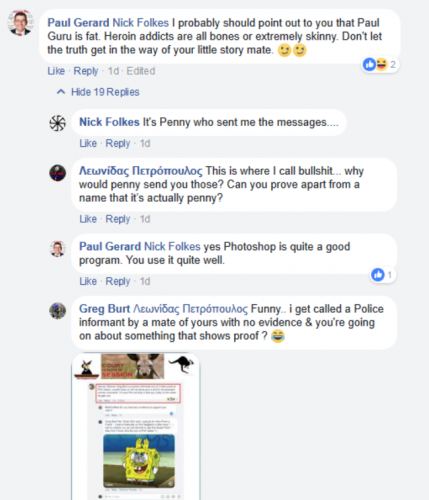 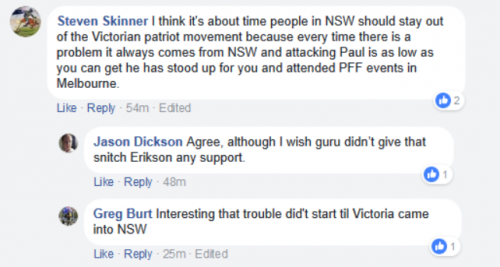 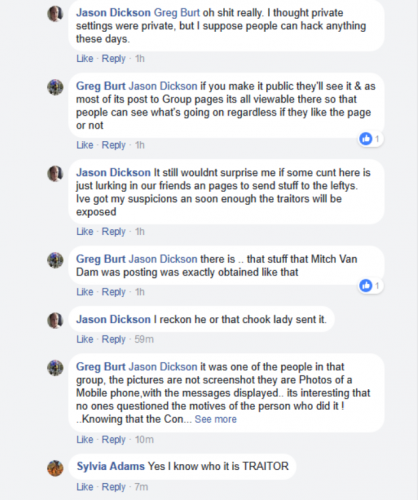 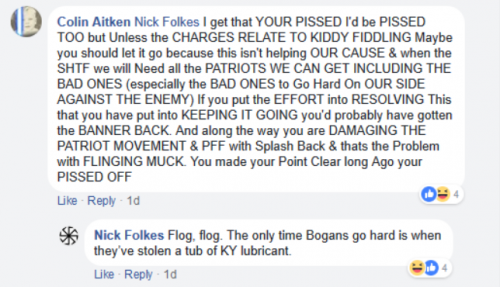 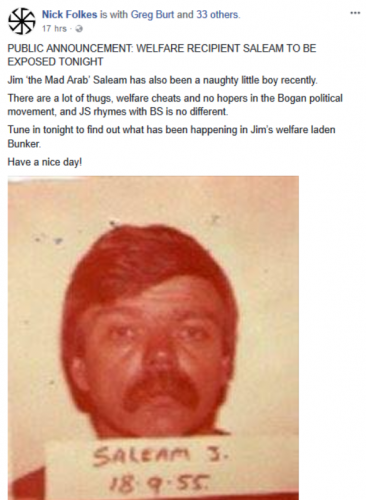 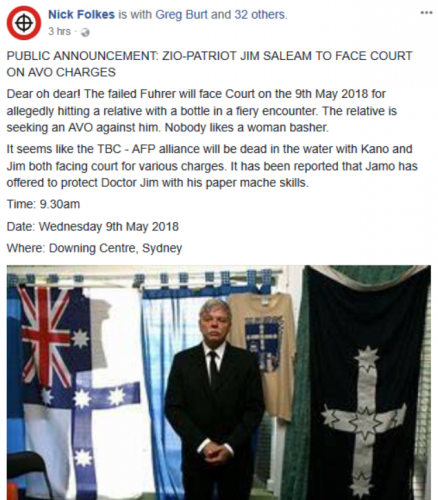 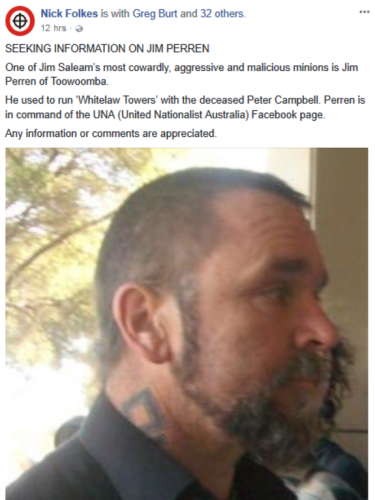 Last week, serial pest Neil Erikson was in court again, on this occasion to be sentenced for contempt: see : Judge scolds far-right activist Neil Erikson as ‘childish’ for wearing uniform to court, Karen Percy, March 13, 2018 | You’re talking ‘rubbish’, judge tells far-right activist Neil Erikson, The Age (AAP), March 13, 2018. While sentencing has been reserved, Neil and his dickhead mates — Garry Hume, Ricky/Rikki Turner and Richard Whelan — are due back in court in June to face charges of riot, affray, assault etc arising from the MILO stoopid of last year.

Notwithstanding the angwy words with Folkes and Freedom, the TBC is making money thru selling memberships and merchandise — seemingly, with a plan to open a gym in Melton along the lines of their kameraden ‘The Lads Society’ in Cheltenham. Last month, the TBC’s number one fan, Phill Galea, was declared fit to stand trial for alleged terrorisms:

An anti-Islam extremist accused of plotting bomb attacks has been ruled fit to stand trial by the Victorian Supreme Court.

Phillip Galea is charged with collecting or making documents to prepare for terrorist acts between 2015 and 2016.

Mr Galea is currently represented by Legal Aid after he sacked his first law firm, which commissioned a psychiatric report that found he was unfit to stand trial.

Barrister Tim Marsh today told the Supreme Court two subsequent psychiatric reports found his client able to explain the role of judge and jury and the difference between pleas.

Justice Elizabeth Hollingworth said it appeared as though the author of the first report was trying to determine Mr Galea’s beliefs and whether they were “radical”.

The Magistrates Court has previously heard Mr Galea has links to anti-Islam groups and had allegedly made an order for potassium nitrate, which can be used to manufacture explosives.

Mr Marsh this morning said the additional reports covered whether Mr Galea would be able to participate in a trial, and he and the commonwealth prosecution were in agreement that Mr Galea was fit to stand trial.

Justice Hollingworth remitted the case back to the Magistrates Court, where Mr Galea’s case is listed for committal in April.

Otherwise, the methgoblins cancelled a proposed meeting in Tarneit to organise anti-African vigilantes, but on the plus side have declared that, in-between court dates, they’ll be having another flagwit parade in June in Melbourne (see : June 26, 2016 : True Blue Crew & Co ~versus~ Melbourne and Australian Pride /// Flagwit Rally, June 25, 2017 : Recap), and will be joined by dozens of racist gronks in Sydney and elsewhere.

While this may suggest the end of Aryan Nations in Perth, at least some of the handful of boneheads associated with the brand have instead decided to re-badge as ‘Combat 18’. Oh, I should also add that the site of the murder was also the site of Blair Cottrell’s announcement in November 2015 that he would be forming a political party (‘Fortitude’); he and other members of the UPF Melbourne having been guests of the Aryan Nations’ murderers for that weekend’s ‘Reclaim Australia’ rally.

As for Antipodean Resistance, they’ve been carrying on chucking up posters and going for walks and doing some other stuff. Their kameraden in the US (Atomwaffen) and the UK (National Action) have also been making headlines, albeit for killing people and doing terrorisms. VICE UK has recently published a series of articles on the far-right under the collective title of ‘Hate Island’; it includes one examining ironmarch dot org, a/k/a ‘The Obscure Neo-Nazi Forum Linked to a Wave of Terror’ (James Poulter, March 12, 2018):

Kermit The Flog was in town recently. The following reviewers give his latest tome on 12 Rules For Life Big Ups:

*US propagandist Daniel Pipes was also recently in the cuntry: see : Daniel Pipes Comes to Melbourne: Are Australian Muslims Right to be Outraged?, Chloe Patton, ABC Religion and Ethics, March 8, 2018.

Home Affairs Minister Peter Dutton has extended the white hand of friendship to white farmers in South Africa and informed them that STRAYA has indeed ‘boundless plains to share’ (with white men). According to Jason Wilson, Peter Dutton’s offer to white South African farmers started on the far right (The Guardian, March 16, 2018) — which seems about right. According to Jon Piccini, Peter Dutton’s ‘fast track’ for white South African farmers is a throwback to a long, racist history (The Conversation, March 19, 2018) … which again, seems about reich. (See also : Drawing The Global Colour Line, Henry Reynolds, Marilyn Lake, Melbourne University Press, 2008.)

Dutton’s kamerad, the Very Ethical Jim Molan, was angwy and upset (presumably) when Little Britain First leaders Paul Golding and Jayda Fransen were jailed for hate crimes a few weeks ago; worse yet, the hate criminals had their Facebook page deleted. Oh, and Golding was attacked in prison and had his nose broken last week.

In Germany, a number of neo-Nazis have been jailed for attacks upon refugees: see : Germany: Far-right ‘terrorists’ jailed for attacks on refugees, Al Jazeera, March 8, 2018 (‘Dresden’s high court sentences seven members of the Freital Group to between five and 10 years for attempted murder’). 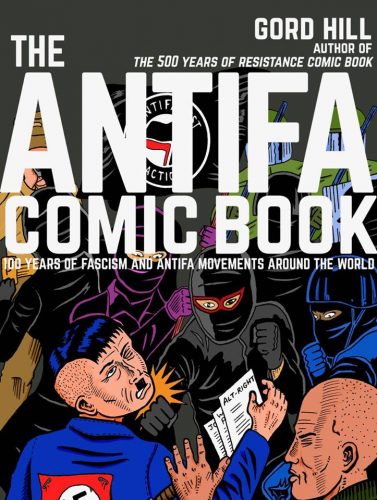 Arsenal Pulp Press in Canuckistan is publishing a cartoon guide: The Antifa Comic Book: 100 Years of Fascism and Antifa Movements Around the World by Gord Hill.

In Russia, police in St Petersburg have arrested a man allegedly responsible for organising the murder of antifascist Timur Kacharava in 2005 (St. Petersburg: Police arrests man behind antifa activist Timur Kacharava’s assassination, Crime Russia, February 23, 2018). Elsewhere, Russian authorities have been keeping busy repressing anarchists and anti-fascists; a useful summary of recent bastardy is available via avtonom dot org: Review of repressions against anarchists in Russia – 2017 and first months of 2018. In Sydney on the weekend, local anti-fascists held a smol rally outside the Russian consulate in solidarity with compañerxs in Russia. 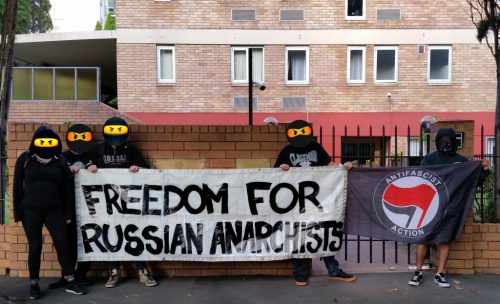 Finally, two four recent articles examine the impact anti-fascist action has had on fascist organising in the US: Is Antifa Counterproductive? White Nationalist Richard Spencer Would Beg to Differ., Natasha Lennard, The Intercept, March 17, 2018 | The alt-right is in decline. Has antifascist activism worked?, Jason Wilson, The Guardian, March 18, 2018 | How Antifa uses no-platforming successfully to fight white supremacy, David Griscom, New Statesman, March 19, 2018 | Antifa Has Richard Spencer on the Run. Does That Vindicate Its Tactics?, Joshua Holland, The Nation, March 22, 2018 (‘There’s good reason to believe that antifa’s success has come despite violent tactics, not because of them’).

Recently, in Michigan, both Richard Spencer and Matt Heimbach had A Very Bad Time: see : After Fights And Arrests, Richard Spencer Speaks To Tiny Crowd At Michigan State, Christopher Mathias, Huffington Post, March 6, 2018 (‘Spencer and his white supremacist buddies had a miserable two days in Michigan. Everywhere they went, anti-fascist protesters were waiting’). Worse was to come for Heimbach, after he was caught fucking his father-in-law’s (Matt Parrott’s) wife; Parrott also being the other key leader of the neo-Nazi groupuscule ‘Traditionalist Worker Party’. See : How a white nationalist’s family came to blows over a trailer tryst, Marwa Eltagouri and Avi Selk, The Washington Post, March 14, 2018 | Neo-Nazi Group Implodes Over Love Triangle Turned Trailer Brawl, Kelly Weill, The Daily Beast, March 14, 2018 (‘Matthew Heimbach and his spokesman came to blows after Heimbach was caught sleeping with the spokesman’s wife. What’s more, Heimbach is married to the spokesman’s stepdaughter’).