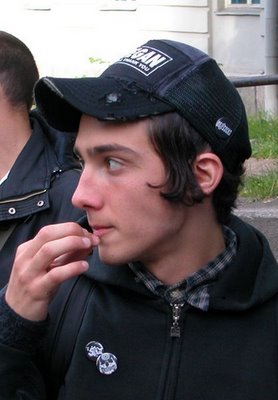 Timur, we will always remember you!

At around 6.30 p.m. on Sunday the 13th of November 2005, anti-fascist activist, anarchist, musician and dear friend Timur Kacharava was murdered by neo-nazis on Ligovsky prospekt in St Petersburg city centre, Russia.

Following a FOOD NOT BOMBS action outside Vladimirskaya metro station, Timur, Maxim Zgibai, and a few others walked around the city, ending up at a bookshop on Ligovsky prospekt. Timur and Max stayed outside to finish a beer while the others went inside. Shortly thereafter Timur and Max were suddenly and brutally attacked by a group of around 8-10 neo-nazis, screaming “anti-antifa”. Timur was stabbed repeatedly in the body and neck, severing the carotid artery. Max was stabbed 5 times in the chest and back, and had his head cracked open. Following the vicious attack, which lasted about a minute, Max managed to call out for an ambulance to the security guard inside the bookshop. When Max came to the aid of Timur, he couldn’t feel his pulse. Timur was white and lying in a pool of his own blood. He was already dead. His friends could do nothing to save him.

Max is currently in hospital in a serious but stable condition. He is conscious but in deep shock. Amazingly the knife wounds missed all organs, and he has suffered no brain damage. He is unbelievably lucky to have survived.

An ambulance and police came only some 10 minutes after the attack. A supposed “emergency” response. Keep in mind that this attack occurred across the road from the main train station in the city centre of St Petersburg. The group of neo-nazis escaped and have not yet been apprehended by police.

There is evidence to suggest that Timur, Max and friends were followed after the FOOD NOT BOMBS action, as neo-nazi “scouts” (people on the lookout) were spotted at the time of the serving. Timur had already been attacked on the 9th October 2005, and thus they knew him by face and name. Similar beatings by neo-nazis have been common place all over Russia for some time.

There is a strong underground fascist movement in Russia, which is associated with the Partiya Svobody (Freedom Party), RNE (Russian National Unity) and DPNI (Movement Against Illegal Immigration) political parties. Street parades by these parties have taken place in St Petersburg, with the participation of neo-nazis chanting racist and nationalistic dogma. We believe that on Sunday the 13th of November, the neo-nazi group followed our group of friends with the intention to kill. The swiftness of the attack, the readiness of knives, the fact that they all wore low black caps and indistinguishable clothing, and the speed of their escape all attest to this.

We remember Timur as a passionate, fun, intelligent and idealistic friend and talented musician. As a beloved only son and as a boyfriend. His sudden and violent death has devastated the local community in St Petersburg and broken the hearts of friends and comrades all over the world – in Russia, Belarus, Ukraine, Latvia, Lithuania, Italy, Germany, UK, Spain, France, Portugal, South America, Scandinavia, the USA and Australia.

They didn’t just kill Timur, they’ve killed a part of each of us.

A police investigation of murder and attempted murder is underway. However, previous experience has shown us that the Russian police are in no hurry to solve politically motivated crime. Various political and racial attacks by fascist groups on Russians and foreigners have gone unpunished in the past. The city governor of St Petersburg and some mainstream media has claimed that Timur’s murder was by random “hooligans”, and not politically motivated. It is inconvenient for the authorities to face up to the rise of fascism in Russia – and often these groups are supporting those in power.

This is not something that we are willing to accept.

It is a disgrace to Timur’s memory to claim that his death was for anything other than political reasons. Timur was murdered for his beliefs in equality and freedom – we cannot forget that.

Because we cannot accept murder on the streets, because we believe in freedom, and because we loved our friend Timur dearly, we are organising a series of benefit gigs worldwide. Money raised will go directly towards paying the medical expenses for Maxim Zgibai and other victims of recent neo-nazi attacks, towards finding the murderers and towards putting a stop to the rise of fascism in Russia.

If a concert is being organised in your area please come and honour Timur’s memory, and support your friends and allies in their struggle against fascism in Russia.

If you would like to organise a benefit gig, please contact Timur’s friends on the email address below (or at addresses you already have) for further info.

Timur, we will always remember you!

In Melbourne, Fightdemback is organising a benefit gig for Timur for some time in January or February, 2006. 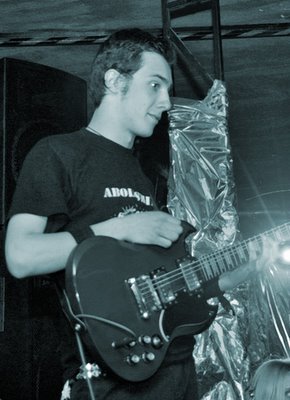 And here’s an account of a very creative — and appropriate — form of commemoration by some Italian comrades:

On December 21 Paolo di Nella boulevard in Rome, which was named after a fascist, was re-named after Timur Kacharava, a young anti-fascist murdered last November in St. Petersburg, Russia.

This boulevard was re-named after Timur Kacharava, who was killed by Russian fascists in St. Petersburg on November 13, 2005. Ten of them attacked two unarmed persons and Timur got numerous knife wounds in the neck and died on the spot. He was just twenty years old, a philosophy student and musician, who helped homeless people and spoke of peace. We think that he deserves that this boulevard is named after him, rather than the guy who preached hate. Besides that we think it is a disgrace to the city of Rome that a street was named after a fascist. That is why we decided to correct this injustice and by doing so to remind everybody that fascism still kills.

In the meantime, here are some links:

I live in Melbourne, Australia. I like anarchy. I don't like nazis. I enjoy eating pizza and drinking beer. I barrack for the greatest football team on Earth: Collingwood Magpies. The 2023 premiership's a cakewalk for the good old Collingwood.
View all posts by @ndy →
This entry was posted in Anarchism, Anti-fascism, Music. Bookmark the permalink.