Not exactly a roaring success for the Australian Protectionist Party in Newcastle on the weekend: just four anxious souls rocked up on Saturday to their protest against the Islamification of Newcastle, two of them party members. Spokesperson Nicholas Hunter-Folkes is pretty cool though; meathead held a sign reading “LISTEN TO THE MAJORITY NOT THE MINORITY” — all the while being outnumbered by a token number of counter-protesters.

Said one of two concerned local residents to attend the rally:

“We’re here to protest because we don’t I don’t like it I don’t [indecipherable] country being taken over by Muslims stupid politicians let them get away with everything it’s not right.”

A rally opposing a mosque in Elermore Vale was overshadowed by anti-racism protesters at Civic Park today.

But organiser Nick Folkes denied the Australian Protectionist Party was opposed to the mosque on race grounds.

Just four members of the party turned up to protest the proposed mosque.

The protectionist party handed out flyers with an image of a Muslim man holding a sign that said ‘‘Islam will dominate the world’’.

The flyer stated traffic and parking, 5am wake-ups, a drop in house values, migration into the area and extremist elements would be the effect of a mosque in the suburb.

A small group of anti-racism protesters stood behind the party armed with signs stating ‘‘It’s a cowardly racist who hides behind cars.’’

For unknown reasons, Perth plasterer Paul Innes has pissed off from convicted terrorist Don Black’s Stormfront website, for which august forum he was previously the token Aussie moderator (his place taken by a Damn Yankee). Presumably, Paul is too busy planting trees in his Pioneer Little Europe to persist in berating other bigots for misspellings… or something.

Otherwise, Canadian Holocaust denialist Paul Fromm is on tour, and will be speaking in Melbourne on December 11. 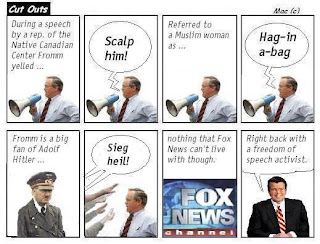 Radical right-wing skinheads have attacked in the Bulgarian capital Sofia two young Romas and, besides, one of them seriously injured. As the urban authorities informed on Friday, the attack occurred on the Thursday evening in a bus in the city center. The serious casualty has been delivered with a cranial break and a cerebral injury to the hospital, however, is not in mortal danger. The other victim has suffered no heavy injuries. Members Roma-[minority] have to suffer in Bulgaria from discriminations and are the purpose of violent raids over and over again.

Recent municipal elections in Athens witnessed widespread abstention–roughly two-thirds of the electorate didn’t bother to vote during a second round–and also an apparent swing to the left. In addition, for the first time a member of the neo-Nazi groupuscule Golden Dawn was elected. The ever-reliable and always-outrageous blog From the Greek Streets has loads moar on social struggles in the birthplace of democracy. Otherwise:

Attacks On Immigrants On Rise In Greece

1/12/2010- A wave of violent attacks against immigrants by suspected right-wing extremists has put Muslims and the police on alert in rundown parts of Athens with burgeoning migrant populations. Immigrants have been beaten and stabbed near central squares, and several makeshift mosques have been burned and vandalized. In the most grievous attack, at the end of October, the assailants locked the door of a basement prayer site and hurled firebombs through the windows, seriously wounding four worshipers. “The attacks are constant — I’ve never seen anything like this,” said Naim Elghandour, who moved to Athens from Egypt in the 1970s and now heads the Muslim Association of Greece. “I used to be treated like an equal. Now I’m getting death threats.”

Swedish nutzi Anders Hoegstroem has plead guilty to stealing a sign from Auschwitz (Neo-Nazi pleads guilty to theft of Auschwitz sign, Digital Journal, November 26, 2010) and will spend some months of quiet contemplation in a Swedish prison for his efforts. Also in Poland, members of reich ‘n’ roll band Tormentia were subjected to some harsh criticism by music lovers while on their way to a gig in October.

Charles Clover has written a lengthy article for the Financial Times on ‘The skinhead terrorists’ (December 3, 2010). Paying particular attention to the murderous antics of one gang of boneheads called the ‘National Socialist Organisation’ (NSO) (aka ‘National Socialist Society’), Clover notes that it was likely funded by some VIPs, and functioned with the state’s blessings, which fact is also meant to be surprising rather than mundane (The Other Russia is one source that provides copious documentation of the Russian state’s otherwise unremarkable gangsterism; the recent Wikileaks of US State Department dox gives the official seal of approval). Clover quotes one former fascist leader who gets straight to the point:

…the problem that the authorities have with groups such as his is not their violence, but the prospect of the political competition they present. There is an implicit contract between bonehead gangs and the authorities under which the state turns a blind eye to violence by bonehead groups, in exchange for their not getting involved in politics.

As antifascist activists marked the fifth anniversary of the murder of the 20-year-old antifascist activist and punk musician Timur Kacharava on Saturday, they claimed that they are under increasing pressure from the police, while the threat of attacks from nationalist radicals has not decreased…

chtodelatnews is another good sauce of infos, as is The SOVA Center for Information and Analysis and avtonom.org. Note that Russian police have somehow found time in their busy schedule to prosecute some artists for taking the piss.

I live in Melbourne, Australia. I like anarchy. I don't like nazis. I enjoy eating pizza and drinking beer. I barrack for the greatest football team on Earth: Collingwood Magpies. The 2023 premiership's a cakewalk for the good old Collingwood.
View all posts by @ndy →
This entry was posted in Anti-fascism and tagged antifa notes, Australia, Bulgaria, Greece, Poland, Russia. Bookmark the permalink.