The ‘Australian Protectionist Party’ are a weird mob. Formed in 2007 as a split from the ‘Australia First Party’, the APP has adopted as its model the ‘British National Party’ under Nick Griffin. Displacing the good (neo-)Nazi John Tyndall from the Party leadership, Griffin’s assumption of power in September 1999 was accompanied by a shift in political direction, away from the organisation’s neo-Nazi past and towards mainstreaming the party as the ‘authentic’ voice of White nationalism (and White alienation) in Great Britain. The re-branding and re-positioning of the BNP has brought with it some success, especially for the Chairman, who in 2009 was elected, along with Andrew Brons (another veteran fascist), to the European Parliament.

The APP is nominally led by Adelaidean Andrew Phillips (the party’s national chairman); its most prominent public spokesperson is former AF member and Sydney resident Darrin Hodges. Darrin used to dig Hitler videos on the White supremacist forum Stormfront, but now touts the virtues of Zionism, hatred of Jews having been supplanted by a fear and loathing of Muslims. Both Phillips and Hodges contested the 2010 Federal election, Phillips for the seat of Mayo in South Australia and Hodges, along with Nicholas Hunter-Folkes, on a Senate ticket in NSW.

Two other members/supporters of APP have made a minor splash recently, in ways that tend to undermine claims that the Party is a ‘moderate’ voice. The first is a member of the APP’s Internet discussion Forum using the pseudonym ‘Mutation’. In response to a media report of a public brawl in Adelaide (African community tension sparked Adelaide brawl, Jason Om, ABC), not for the first time, ‘Mutation’ has made his attitude to n*gg*rs rather plain: 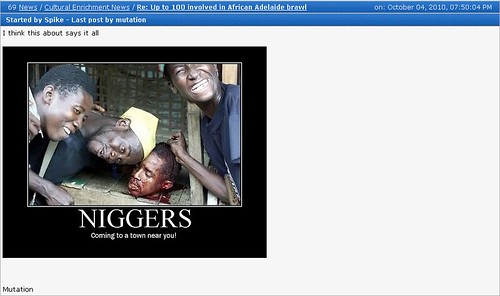 The other APP member/supporter to have raised questions as to his mental state is Joel Buckley Joel Panzerkeil “Joel Panzerfaust”. Joel is a member of the Australian Navy who enjoys candlelit dinners, long walks on the beach, bashing leftists and Hitler’s SS.

Well, according to theantibogan blog anyway, which features a happy snap of the able seaman in question showing off his lack of accessory nipples and preparing to go into battle for the Master Race.

I used to get called a bogan, only it was ’cause I wore plaid flannel shirts, not espoused racism.

I live in Melbourne, Australia. I like anarchy. I don't like nazis. I enjoy eating pizza and drinking beer. I barrack for the greatest football team on Earth: Collingwood Magpies. The 2021 premiership's a cakewalk for the good old Collingwood.
View all posts by @ndy →
This entry was posted in !nataS, Anti-fascism and tagged Australian Protectionist Party, Joel Buckley. Bookmark the permalink.