Nutzis are a pretty weird mob, of that there is little doubt.

They’re also a highly fractious one, given to sectarianism, and violent squabbling.

In Australia, there have been a handful of killings among local nutzis, among them the murder of Wayne ‘Bovver’ Smith at Dr James Saleam‘s bunker in Tempe on Hitler’s birthday (April 20) in 1991; in 1990, on the same date, Dane Sweetman used an axe to murder David “Pommy Dave” Noble; on September 1, 1989, suspected police informer David Locke was murdered by ANM member Wayne Robert Napier (using a concrete pole) — but recent years have been fairly quiet.* Of course, that doesn’t mean local nutzis haven’t been at each other’s throats in a metaphorical sense, and one of the latest dramas revolves around Deakin University student Scott Harrison, his religious cult, and the neo-Nazi gang Volksfront.

To begin with: Harrison is a former ‘national anarchist’ and follower of Welf Herfurth, the Sydney-based, German-born businessman and chief proselytizer for the ideology in Australia. Over the course of the last four or five years, Herfurth has been able to attract a few teenage boys and twenty-somethings interested in his bizarro creed (one which has come to replace Herfurth’s former adherence to some variant of white nationalism / national socialism). Until last year, Harrison was probably the keenest of Herfurth’s young followers, and certainly his mouthiest. For reasons which remain obscure, however, last year Harrison decided to abandon national anarchism, and Herfurth, for the greener (browner?) pastures of ‘Creativity’, a bizarro White supremacist religion founded in 1973 by a good fascist named Ben Klassen (he also invented the electric can opener).

Like most other fringe groups, Creativity is split. The creed’s most infamous follower in Australia is probably Patrick O’Sullivan, the silly bugger responsible for putting up ‘White Man Awake!’ stickers all over town, an activity which (in addition to terrorising his non-White housemates — a hobby local housing authorities are seemingly happy to allow him to pursue in the inner-city boarding houses he inhabits) has kept him occupied since his release from prison (for stabbing someone at a party). (See also : Herr Reverend in the news.com.au, June 5, 2009.) A handful of other Creators — or Creatards, as they’re more popularly known — have gravitated into and out of the media spotlight. A few years ago, SA Creatard Colin Campbell III, aka “Reverend Col Campbell 3rd, Komandant WCOTR”, lost a stoush he had with a scribbler for News Limited:

The Press Council has dismissed a complaint from Cailen Cambeul, of the self-styled Church of Creativity, South Australia, that the News Limited website, The Punch, misrepresented adherents of the church as uneducated, illiterate and prone to committing violence…

Earlier in the year, Chris Smith, a NSW Creatard, got his own back on ZOG and The Controlled Media when one of the cult’s propaganda efforts got featured in the local newspaper (‘White supremacists target Penrith’, Omar Hamwi, Penrith Press, March 29, 2010).

So much for the good news.

The bad news is that, because of Chris Smith’s membership of Volksfront, the Reverend Harrison has been forced to publicly repudiate his fellow Creatard, choosing to do so on Stromfront (the world’s No.1 White supremacist website, established in 1995 by convicted neo-Nazi terrorist Don Black). Normally, airing the White supremacist movement’s dirty laundry in this manner is considered poor form: the thread has subsequently been cleansed by moderator Paul Innes (‘Steelcap Boot’). Luckily, a little birdy has preserved the evidence: 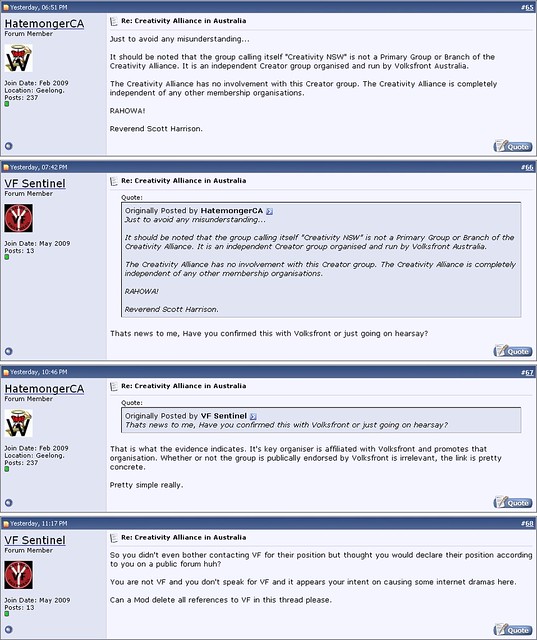 But who, you may ask, are Volksfront, and why should anybody care?

In brief, Volksfront has its origins in a prison in Portland, Oregon in 1994, when four boneheads (neo-Nazi skinheads) decided that starting a new gang would be a neat idea. Until recently, the gang was under the leadership of a bonehead called Randal Lee Krager; supposedly, a newer generation has taken over since Krager left town. The group has a violent history (for example: “Volksfront’s Washington state chapter leader, Kurtis William Monschke, joined three other racist skinheads in 2003 in beating to death a homeless man in Tacoma using baseball bats and rocks”) which has proven to be both a blessing and a curse.

After an abortive attempt spearheaded, just a year following the brave assault upon the homeless man, by Salvation Army worker Stuart McBeth — then the leader of the now-defunct ‘Patriotic Youth League’, the youth branch of the ‘Australia First Party’ — Volksfront finally established a franchise in Australia in 2007. (An ‘Official Supporter Club’ was created in late 2008.) The credit for this is due in no small measure to Welf Herfurth. (VF also claims franchises in Canada, Croatia, Germany, Italy, Portugal, Spain and the UK.)

The membership of Volksfront Australia appears to be concentrated in Sydney. Apart from Herfurth, other prominent members include Reverend Chris ‘ROA’ Smith, here seen posing for the camera (and thereby exposing the pretty Creativity tattoo above his elbow): 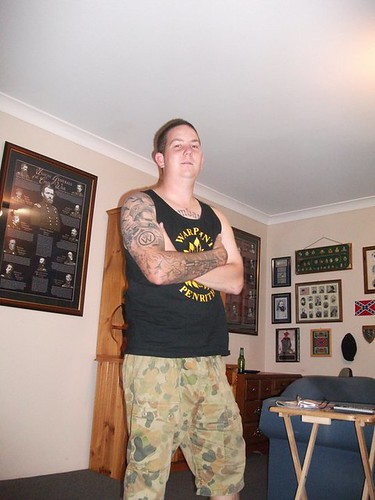 Here’s a photo of Welf Herfurth — who’s like, an anarchist and stuff, and definitely not a Nazi, or anything like that — chillin’ with his VF kameraden Matt C. Welf wears Thor Steinar, a label most Germans know as ‘one of the clothing brands of choice for style-conscious neo-Nazis. It has been described by wits as “the H&M of hate” and “the Zara of xenophobia”.’ The happy snap was apparently taken at a VF fundraiser held a few months ago. The fundraiser was for ‘Prisoners of War’.** 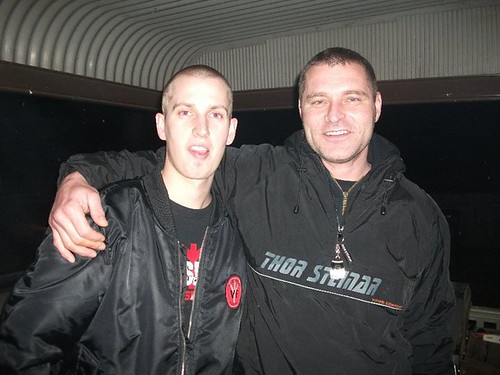 And here’s another pretty picture from the same fundraiser of: a) some bloke who’s obviously handy with a knife and; b) a fair maiden who reckons that Hitler was a top bloke, hatred for Jews runs in the blood, and French arms dealer Thales oughta hang their heads in Gallic shame. 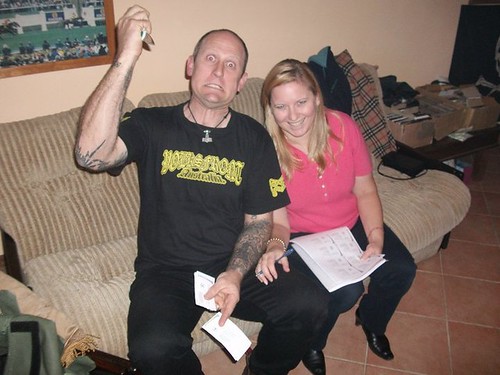 The bad blood between Scott Harrison (the Geelong-based Creatard) and Chris ‘Race Over All’ Smith (the Sydney-based Creatard) is presumably related to the arrival of VF in Australia, and the fact that Reverend Harrison has pledged his loyalty to ‘rival’ bonehead gang the (Southern Cross) Hammerskins. The circumstances surrounding VF Australia’s origins are now public knowledge. Nicole Hanley, formerly a ‘Blood & Honour Australia’ organiser (B&H is joined at the hip with the Hammerskins) has now re-aligned herself with VF, but at the time of VF’s emergence, she gave the following account of the boys’ upset:

The main problem is that the Hammerskins are the main ‘tough’ and ‘cool’ group to be in over here, and all the guys want to join them first. And then they have to find something else to belong to when the Hammerskins turn them down. Kenny (who is now trying to lead B&H) used to be a Hammerskin but handed in his patches a few years ago. He then wanted to come back to HSN and they said no. So he is now trying to be the B&H ‘big wig’ overall, and in Vic. Pete (B&H SA) has also asked to prospect for HSN, and he may have a chance at doing so, but not in the foreseeable future. He is OK though. Reuben (B&H Qld) desperately wants to prospect for HSN, but will never be given the opportunity. He is one of my Hammerskin ex’s ‘crew’. To soften the blow I suggested that he be encouraged to get involved with B&H instead, because it is important for people to feel a part of something. So it was purely on my ex’s recommendation that Reuben was allowed to become part of B&H last year, as he was a complete unknown to the guys. Last year Volkfront started a probationary chapter here, which pissed the Hammerskins off big time. Not because they wouldn’t support Volksfront, but because of how it was done. Doug [Schott] from Blood Red Eagle was the first probationary member, and he was allowed [to] start the chapter without having actually met any of the VF guys in the USA. A lot of the HSN guys can’t stand him and think he is a moron, so they were unimpressed with VF bending the prospect rules and letting him prospect sight unseen. Justin (AustMade) was in the scene years ago (I knew him back then), he also left and then has recently come back. He started off prospecting with VF, but then realised he had backed the wrong horse as HSN hated them, so he left and joined B&H Vic. And that’s pretty much where we are…

Beyond these shores, and at the birthplace of the international neo-Nazi skinhead network:

On September 2 to September 5, the white supremacist organization Volksfront International held their “Althing” gathering on private land in Missouri, at the “Samuel Weaver Memorial Hall” approximately an hour outside of St. Louis. Rose City Antifascists noted with interest that one of the musical acts billed for Volksfront’s gathering was the Oregon “National Socialist Black Metal” (NSBM) band Immortal Pride. Immortal Pride is part of a network of racist musical acts allied to Blood & Honour American Division, which is in turn largely guided by Volksfront. This is the first time that Immortal Pride has played a major neo-Nazi gathering. In recognition of this development, Rose City Antifascists wish to draw attention to the main forces in the neo-Nazi black metal underground in Oregon today, with the hope that they can be countered from both within and without the metal scene.

Moaron the local NSBM scene later. In the meantime, it should be noted that it’s just over six months since Portland SHARP Luke Querner was shot and nearly killed in what appears to have been assassination attempt. Among the groups suspected of involvement in his attempted murder is Volksfront.

**According to an analysis by the ADL (Anti Defamation not Australian Defence League) dated December 2007:

Volksfront mobilizes its constituency to provide financial and moral support to imprisoned white supremacists. Its “Prisoner of War Affairs Department” mails free Volksfront literature to prisoners incarcerated for what it describes as “political crimes”: actions “in service or defense of European-Americans” or in “waging war against a power hostile to the White Race.” Volksfront defines a POW as “a person incarcerated as a direct result of waging war against a power hostile to the White Race.” Despite its proclamation that it is “completely anti-crime,” every member on Volksfront’s POW list has a major criminal conviction. Among those listed as POWs are Byron de la Beckwith, who murdered civil rights activist Medgar Evers in 1963; Yori Kahl, who murdered a United States Marshal in 1983; neo-Nazi Ken Mieske, who murdered Ethiopian immigrant Mulugeta Seraw in Portland, Oregon, in 1988; and Erich Priebke, a World War II SS officer serving a sentence for executing 335 Italian civilians in March 1944. Members of The Order, a violent white supremacist group that carried out murders and robberies in the 1980s, are also on the POW list.

Interestingly, a Volksfront member who has not been listed as a POW is Kurtis Monschke. Monschke, who has the Volksfront emblem tattooed on his chest, was the unit leader of a Volksfront probationary unit in Washington when he and three other racist skinheads murdered a homeless man in Tacoma in March 2003. Three later pleaded guilty and Monschke was convicted of murder. Shortly after his arrest, Volksfront attempted to distance itself from him and erased all his written entries from its Web site. The group released an “official statement” condemning the murder of the victim, who was a white veteran, and saying that the crime was “a disgrace to the Folkish Movement” and that “the perpetrators, if found guilty, should be prosecuted to the fullest extent of the law.”

I live in Melbourne, Australia. I like anarchy. I don't like nazis. I enjoy eating pizza and drinking beer. I barrack for the greatest football team on Earth: Collingwood Magpies. The 2021 premiership's a cakewalk for the good old Collingwood.
View all posts by @ndy →
This entry was posted in !nataS, Anti-fascism, History and tagged Scott Harrison, Volksfront Australia. Bookmark the permalink.