Volksfront Australia, like most local neo-Nazi groups, is a foreign import. Established in 1994 in the United States, and named in honour of a racist Afrikaaner mob, the group has recently embraced a few converts Down Under: chief among them (according to rival sect Blood & Honour / Southern Cross Hammerskins) the former German NPD and Australian One Nation Party member Welf Herfurth.

Did I happen to mention that Welf also considers himself an “anarchist”?

This is not the first time Volksfront has had an Australian franchise. In 2004, a young racist named Stuart McBeth (1981–), then the leader of the now defunct ‘Patriotic Youth League’ (PYL) — a risible attempt by Dr James Saleam to extend Australia First Party membership to the under-40s — threw his tinfoil helmet into the ring as an Australian organiser for the United States People’s Front. (Oddly enough, like Welf, Stuart was also a former member of ONP.) McBeth resigned as PYL President shortly after being fired, in late January 2005, from his job as a case officer for the Salvation Army. McBeth was replaced by Lachlan Black, also a former ONP member and, like McBeth, a former ONP candidate.

Like the PYL, Volksfront Mk I collapsed in a heap.

Last year, however, some hardy souls decided to revive the Front — presumably in order to provide yoof a boneheaded alternative to B&H and the SCHS. In the US, where the franchise is based, relations between Volksfront, B&H, and the Hammerskins have been frosty. Well, kinda. Actually there are two, rival B&H networks: in the US, B&H ~ American Division, is allied with Volksfront, while outside of the US, relations between different groups in different countries are more fractured. (‘Blood & Honour USA’, allied to the Australian mob, appears to be defunct.)

In any event, the corpse of Volksfront Australia has shown some signs of life. It also appears that at least some local boneheads aren’t all that happy about it. Thus on Stormfront, a local bonehead, ‘Pitbull38’, recently yap-yapped the following:

Re: Hammerskin Nation and Blood & Honour

We have been here from the start & built things from the ground up.

VF’s been in Oz for about [a] year and managed to disrespect & piss off the 2 oldest bonehead crews in Australia (to put it very mildly)… certainly not the best way to start things.

Of their leaders, one [Welf Herfurth] runs National Anarchists & New Right (he goes to Asian countries a lot to live with and help the slopes… strange for a supposed WN to travel to Asia so much & without his wife… sure no hanky panky going on there??? Yeah right). He has his fingers in many different pies and is certainly no skinhead & never has been. His stated love for Asian culture, trying to be a politician & trying to appear everything to everyone & his twisted written works are proof of this.

The other guy ([Douglas Schott] singer of Blood Red Eagle) used to be [an] anti-racist/SHARP with his own anti-racist band to boot. A little big-mouthed midget with the ego of Napoleon.

VF leadership have been made aware of these facts & none seem to care, so yeah… sounds like a great NS [National Socialist: ie, Nazi] bonehead crew to me… lol!

VF are outcasts (akin to C18) in Australia as far as SCHS & B & H are concerned. So if you don’t want to be outcasts yourselves, avoid them like the plague.

Unfortunately for Poodle38, Stormfront moderator Lycia had to yank on his chain. Thus the above post now reads simply:

We have been here from the start & built things from the ground up.

Hammers don’t forgive, but whether or not Poodle38 responds positively to his obedience training remains to be seen.

Incidentally, the next gig organised by Benson & Hedges is scheduled for ANZAC Day in Perf, WA, where a small assortment of boneheads will pay tribute to the ANZACs by celebrating the Nazi war-machine that killed them in their thousands.

As for Volksfront, it, like other bonehead groups, has a violent history. A few highlights:

Jacob Laskey, formerly Volksfront’s Prisoner Affairs Coordinator in Eugene, was arrested in 2005, along with his brother, Gabriel Doyle Laskey, Jesse Lee Baker and Gerald Anthony Poundstone, for throwing rocks engraved with swastikas at a synagogue in Eugene, Oregon, during a religious service in October 2002. They were indicted for conspiracy to violate civil rights and other related charges. Jacob Laskey also faced charges of attempting to intimidate a witness in the case. Jacob and Gabriel Laskey both pleaded guilty in August 2006. Poundstone received 15 months in prison in September 2006 after pleading guilty. Jacob Laskey was sentenced to 11 years and 3 months in prison in April 2007. (Laskey had previously been charged with battery and commission of a hate crime for allegedly beating and threatening an African-American man in December 2000 in Jacksonville, Florida.) Gabriel Doyle Laskey was sentenced to five years probation, as well as six months at the Lane County work release program followed by six months of home detention.

Kurtis Monschke, 20, a probationary unit leader for Volksfront, was sentenced to life in prison on June 4, 2004, for his role in the March 23, 2003, murder of Randall Mark Townsend, 42, in Tacoma, Washington. Prosecutors indicated that Monschke, who has the Volksfront emblem tattooed on his chest adjacent to a swastika that is similar to the one depicted on the main racist skinhead character in the film American History X (1998), instigated the brutal attack in an effort to establish his fledgling crew among higher-ranking members of Volksfront. Emulating a brutal scene in the film, Monschke and his three followers placed Townsend’s open mouth on a railroad tie and stomped several times on the back of his head. Each blow was accompanied with shouts of “white power.” Scotty James Butters, 20, David Nikos Pillatos, 19, and Tristain Lynn Frye, 22, all pleaded guilty and testified against Monschke.

On January 25, 2003, five boneheads attacked a 17-year-old black youth in the parking lot of his residence in Vancouver, Washington. Matthew R. Schmoyer, Carl D. Wolff, Brandon Webb, Jeremy R. Whitten and one other bonehead who was later acquitted had been partying at Schmoyer’s apartment before heading to a Volksfront-sponsored concert near Hillsboro, Oregon, called “Rock Against Communism.” The group was holding the concert to raise legal funds for a Volksfront “comrade” whom they felt was “wrongfully charged with assault.” Whitten was sentenced for misdemeanor assault after striking a plea agreement. Wolff, Webb and Schmoyer were convicted of malicious harassment.

Volksfront was founded in prison by a bonehead called Randal Lee (‘Randy’) Krager. In 1989, when he was 15, Krager was arrested along with several other boneheads and charged with racial intimidation for allegedly assaulting three teenagers near a park in Portland, Oregon. During the attack, assailants pummeled a Hispanic girl in the face while shouting, “Why aren’t you white?” Krager was sent to a juvenile detention center.

The next year, he attended the civil trial of White Aryan Resistance leader Tom Metzger — who was being sued by the Southern Poverty Law Center for his role in encouraging the bonehead murder of a black man in Portland — and told a reporter that Metzger was a “cool guy … one of the nicest guys you’d ever meet.”

By the time Krager turned 18, police had encountered him 28 times.

That year, 1992, Krager was sentenced to 27 months in prison for putting an African-American man into a coma with a single punch. During sentencing proceedings, Krager reportedly shouted “Fucking Jew pig!” at court officials.

Krager’s white supremacist beliefs were reinforced in prison. While inside, he networked with boneheads outside, laying the groundwork for his Volksfront neo-Nazi gang. Krager assumed leadership of Volksfront immediately upon his release in October 1994…

There’s been a few ups and downs for Krager and his kkkrew since then, obviously — mostly revolving around violent crime and bad muzak — with a few lives ended and many more ruined, but what Volksfront Australia will achieve is likely to be a lot less. Much will depend on the ability of the German-born yuppie Welf to put a leash on the boneheads belonging to B&H/SCHS — a task which will probably prove to be a good deal more difficult than convincing a handful of teenagers that his peculiar brand of neo-fascism is actually a form of ‘anarchism’.

Above : Fredrick Töben (Adelaide Institute) and Welf Herfurth (ex-One Nation, ex-Australia First Party[?], mathaba.net) annexe Sydney using the MaGiCaL pOwErS invested in Horst Mahler‘s flag and on behalf of the Nationaldemokratische Partei Deutschlands, January 27, 2005. Unkle Fred was recently released from police custody in London; Herfurth, based in Sydney, has established a tiny fascist groupuscule called the ‘New Right’, consisting of various former members of Stormfront, and — following the lead of British and German fascists — espousing a doctrine he calls ‘national anarchism’. In the UK, the ‘New Right’, lead by Troy Southgate, specialises in Holocaust denial, various other forms of historical revisionism, and the promotion of racism and fascism. 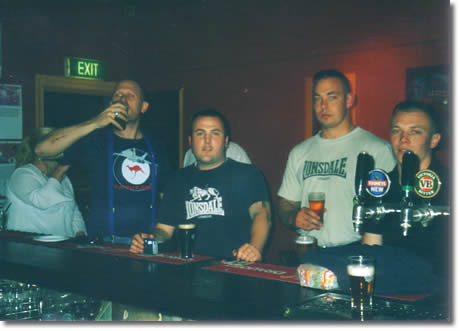