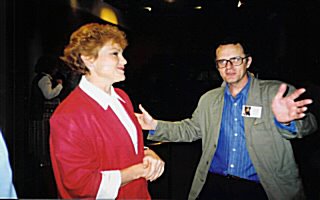 Many people have had unkind words to say about Doctor James Saleam; indeed, I plead guilty to having been one of them. But I’m beginning to believe that Saleam is The Dice Man of the Australian far right and, like Luke Rhinehart, often — entertaining. In the latest installment of the continuing saga of a quack who’s gone to the dogs, it’s been revealed that the newest Fuehrer to be installed in Queensland, John Drew, is (gasp!) possibly gay. Naturally, this unnatural proposition has sparked a pained reaction on the part of the local battalion of the God Hates Fags Brigade. Thus Fellow Queenslander ‘Wodensvolk’ / Carl D. Thompson — a deadset neo-Nazi and, not coincidentally, an exceptionally popular choice among fellow Stormfront Down Under (SFDU) members for the position of Moderator — remarks:

All sorts of allegations have been made against this man, most of which involve tennis and an unhealthy interest in teenage boys.
How much is true, I do not know.
Australia First needs to conduct a formal investigation to determine Drew’s fitness to remain both in the party and in his position.
If a formal investigation finds that there is no basis for these allegations (some of which are vile) the man’s innocence should be proclaimed from the rooftops.
If there is found to be substance to these allegations, well . . . [intimation of extreme violence]

‘303SMLE’ / Jim Perren chimes in with a veiled threat towards Darrin Hodges, the apparent source of these thoroughly scurrilous rumours. According to Jim, Darrin forgot to tell him of his concerns over John’s supposed homosexuality before publishing them on his blog. Or, to be precise, resurrecting some old posts on SF and wedding these to John’s role as Secretary of the Brisbane branch of Australia First.

So, what’s the evidence?

First, the announcement (SFDU, June 13, 2007) of plans to open a gay sauna at The Greyhound Hotel in St Kilda last July produced the usual splutterings by the Moral Majority on SF. The fanatical ferret-loving female fascist (and member of the Newcastle branch of the Australia First Party) ‘ladyfuro’ exclaimed:

What the hell is wrong with our society[?] This used to be illegal & now these dirty little handbags are catered to as much as immigrants are!
Just think…now the filthy paedophiles have some where out in the open to meet…if a terrorist truly wanted to act…

Why, they’d do just what David Copeland did in Brixton, UK in April 1999, and explode a bomb at The Greyhound, wouldn’t they? I wouldn’t be surprised if Jim Perren’s comrade Peter Campbell entertained similar phantasies when he allegedly distributed a tract called ‘How to build a David Copeland special’ among local white supremacists.

Another fascist twat named ‘SEIRYU’, on the other hand (who rather indelicately expresses his political perspective through the use of a Nazi flag as his avatar), expresses a real depth of knowledge regarding The Greyhound’s local environs:

you seen who owns st kilda?

I once had a gay flatmate who used to have very vigorous sessions with his lovers in the next bedroom. He specialised in lengthy penis stroking sessions with delayed orgasms.

It was all very noisy as I remember. This was back in the swinging sixties.

How ever did young John sleep? Why, he must have been tossing and turning all night.

The second and third equally bizarre references to male homosexuality by our Jew-hating, Wagner-loving, tennis-playing AF Secretary also appear on SF, and were made in response to the posting of a link to a vewy scawy and quasi-official sounding document called MEDICAL CONSEQUENCES OF WHAT HOMOSEXUALS DO, by Paul Cameron (of/) The Family Research Institute, a Christian anti-pink think tank based in Colorado. May 29, 2007:

Females are often quite aerobically unfit and so are unable to match the libido of sexually active men who can sustain an erection for a lengthy time.

Fancy having sex with a fat, unfit lady? Contrast this with being pulled off by a very fit and athletic male who keeps himself in absolutely wonderful physical condition…

But who is John Drew? To begin with, Drew THE ANTI-IMMIGRANT ACTIVIST! was profiled by Zoo magazine in August last year, along with Dävid Palmer (Imperial Wizard of the Australian Ku Klux Klan) THE NEO-NAZI! and David Innes (anti-immigration writer and radio DJ) THE WHITE SEPARATIST!. According to Drew himself:

I put my nationalist beliefs into practice by joining Australia First. I used to be in One Nation but my radical [political] beliefs and policy ideas saw me dumped as Queensland State Policy Co-ordinator and as the [candidate] for Ryan in the 2004 federal election [Drew stood in 2001]. I was so irritated I resigned and then joined the more radical Australia First.

According to a Doctor:

John Drew is off his nut. He’s involved in the Patriotic Youth League, the Australia First youth division, yet he’s in his 50s; he’s a bit old to be involved in a youth group.

Well… was involved in the Patriotic Youth League. After Stuart McBeth bailed, a local meathead called Luke Connors stepped forward. After developing an even rarer form of brain cancer through excessive phone use however (or rumour has it), John was left holding the bag, which he now keeps in the closet (along with the rest of his baggage). Two further facts about Our Man in Brisbane are that he used to drive a cab in Sydney and that he thinks Doctor Saleam is Great. Really Great. In fact, in a thread on SFDU titled ‘Jim Saleam… a great Australian’ (April 26, 2006) Drew writes:

In my 38 years as a political activist I have never seen any person so successful as Dr Jim Saleam. He is truly a great [A]ustralian.

Three cheers and a loud huzzah!

And just for good measure:

I live in Melbourne, Australia. I like anarchy. I don't like nazis. I enjoy eating pizza and drinking beer. I barrack for the greatest football team on Earth: Collingwood Magpies. The 2023 premiership's a cakewalk for the good old Collingwood.
View all posts by @ndy →
This entry was posted in Anti-fascism, Sex & Sexuality. Bookmark the permalink.