The Most Dangerous Men In Australia

Australia is proud of its multiculturalism and fair-go attitude for everyone, no matter where they’re from. But recently there has been an increase in right-wing activity across the whole country, from a Ku Klux Klan recruitment drive in Geelong (“We just want to promote our own race, which is the white race”, one leader, called the Exalted Cyclops Brian told the Geelong Advertiser) to protestors calling Townsville the “Ku Klux Klan capital of Australia” over “the black deaths in custody” trial of Queensland copper Chris Hurley.

Th foiled terror attacks in London and Glasgow, and the arrest of foreign-born Gold Coast doctor Mohammed Haneef, heightens the risk of inflaming tensions still running high since the race riots that gripped Sydney in December 2005.

Most people would say that anyone who calls Hitler their hero must be a deranged lunatic, and yet One Nation’s now-thwarted success and the Cronulla riots show how just a handful of right-wing extremists can deeply influence the wider community. With this year’s federal election fast approaching, what effect will this bizarre racist rhetoric produce?

ZOO spoke to three of Australia’s most extreme white supremacists — not to promote their views in any way, but to uncover the depths of hatred still clearly present in Australia.

ZOO also spoke to two anti-racism activists who dedicate themselves to combating this kind of race-based paranoia: Cam Smith, from anti-racism group Fight Dem Back, formed in 2005 to expose neo-Nazis in Australia and New Zealand; and Jeremy Jones, the Director of Community Affairs for the Jewish Affairs Council, who has been writing about extremist groups for 20 years.

“Jews and other races are destroying our nation by interbreeding. It destroys our Australian Anglo-Saxon European base culture. We call it multi-mongrelism.

The KKK appeals to people because the hoods provide anonymity to our members who are lawyers, policemen, teachers and tradesmen. We integrated KKK members with the Australian Nazi Movement, which I formed, to make the National Socialist Defence of Australian People. The NSDAP is against non-European immigration…”

“The self-proclaimed leaders of Australia’s extreme right are a motley collection of under-achievers who deal with their personal inadequacies by trying to make life miserable for others. Sometimes they adopt the clothes and insignia of ratbag organisations from other countries and other historical contexts, and it is easy to see why the Australian Ku Klux Klan is viewed as a handful of thugs wearing clown suits. They seem deaf to the irony of purporting to be Australian nationalists when they adopt Nazi rhetoric — we fought against the Nazis, in case they have forgotten.

Racist activity in Australia rises and falls but every few years, these pathetic individuals emerge from the sewers of Australian society, seek and fail to make political or social inroads, argue among themselves over who is the real führer, then disappear. When active, however, their words intimidate, threaten and take away from the quality of life of whichever group they target.” ~ Jeremy Jones, Director of Community Affairs for the Jewish Affairs Council

“We’re losing our nation. By 2025 we’ll be close to being a minority in our own country. Every creed on earth deserves a place to call their own. I’d like immigration reduced.

We were working just fine under the White Australia policy until the capitalists decided we needed a greater workforce and cheaper labour. I’m fearful that Asians are slowly outnumbering the European traditional people, the majority, who built this nation…”

“Innes is off his rocker. I’m surprised he agreed to be interviewed by ZOO. He usually denies having anything to do with any of this. I asked his wife, I said to her ‘I’m white. If I was a nationalist, could I call myself a white nationalist?’ and she said ‘No, you have to be racist’.

By definition, theirs is a racist ideology. All of his numbers to justify his arguments, Innes has just pulled out of his arse. I’m sure when we were fighting against the Nazis, we weren’t fighting for neo-Nazism. It’s ridiculous.

This country is a multicultural country and that’s not going to change through their hate propaganda or acts of low-level violence and harassment. Such as the attempt by a convicted white supremacist called Jack van Tongeren, leader of the Australian Nationalist Movement, who tried to drive all Asians out of Western Australia by fire bombing Chinese restaurants in the ’80s.” ~ Cam Smith, activist from anti-racism and anti-Nazi group Fight Dem Back

John Drew is an activist and campaigner for the Australis First Party, whose ambition is a new White Australia policy; former state policy coordinator for One Nation in Queensland…

“One Nation dumped me because of my radical ideas. They wouldn’t endorse me for a seat, so I joined the more radical Australia First.

“John Drew is off his nut. He’s involved in the Patriotic Youth League, the Australia First youth division, yet he’s in his 50s; he’s a bit old to be involved in a youth group.

The worst aspect of what they do is corrupting young minds with right-wing rubbish they know isn’t right. They indoctrinate their own children, if they have them. They have long-term plans where every action they take is directed towards preparing for a ‘race war’.

They’re a dangerous minority, whose material is appealing to young people.

Youngsters are initially attracted to these fringe groups because of the messages they give out but when they realise the truth, that it’s not really a Jewish immigration conspiracy that’s causing problems, for instance, why they can’t get a job or why they’re not doing well in school, they can’t get out of these groups easily.” ~ Cam Smith 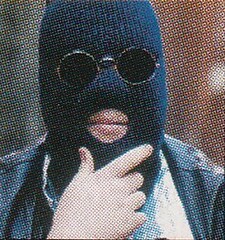 41 Responses to The Most Dangerous Men In Australia