Several years ago, a former moderator of Stormfront Downunder, David Innes, arranged to have his personal website hosted by a racist crank from South Australia called Colin Campbell III, aka “Reverend Col Campbell 3rd, Komandant WCOTR”. Col’n was at that time (mid-2006) the Australian representative of the White Crusaders Of The RaHoWa!™ — one of the many splinters from Matt Hale’s Church of the Creator.

“Not White? Not Welcome!” boasted NetworkWhite.Net.

Since then, despite starring in a feature in Zoo magazine on ‘The Most Dangerous Men In Australia’, David has been denounced as a Race Traitor™, given the boot from Stormfront Downunder by his Yanqui masters, and the position of Fat Controller has been taken up by his brother and fellow Nutzi, Paul Innes, under whose expert guidance the forum has rapidly declined in popularity.

The idea that Paul Innes is also a ZOG™ agent is of course completely preposterous.

As for Col’n, he and his fellow Creators — one in Victoria and one in Queensland — are engaged in a ding-dong battle with the other Creator in Australia, the Reverend Patrick O’Sullivan, for legitimate title to the reins of the Church Down Under. While Col’n and the other pair maintain a number of Creator sites — not without a few hiccups along the way — Patrick has denounced the other mob as being agents of ZOG JOG™. Rather than maintaining a web presence, Patrick spends his valuable time putting stickers up around town and treating fellow Stormfront members to brief, angry missives. Patrick’s own mob is now known as ‘The Creativity Movement’ (TCM), and he is listed by the US-based cult as the main (and only) contact for Australia (PO Box 1622, Collingwood, 3066, Victoria, [email protected]). According to Col’n:

On April 6, 2005, ‘Pontifex Maximus’ Matt Hale was sentenced to a 40-year prison term for his attempt to solicit the murder of Judge Joan Lefkow, who had ruled against Hale’s Church in a patent case. Lefkow was vilified as a “probable Jew,” “criminal judge” and “kike- and nigger-loving” traitor. Hale’s projected release date is December 6, 2037.

Since his incarceration, Hale has become something of a martyr for Creators, as well as other Nutzis. Recently, William ‘Bill’ White, Pontifex Maximus of the “American National Socialist Workers Party” (ANSWP), has been arrested and jailed for allegedly using his website to solicit another person to injure a juror in Hale’s case on account of their role as the foreperson of the jury that convicted him.

Closer to home, fellow Stormfront member Dr James Saleam recently made a trip to Wellington to address several score boneheads belonging to the New Zealand National Front as they gathered outside the Parliament building. While there, ‘Jim’ took the opportunity to have himself photographed fondling a book which once belonged to Ash, one of the individuals involved in FightDemBack! in New Zealand.

Exactly why the Jew-hating Jim agreed to have his photo taken — and why he gave permission to Queensland-based neo-Nazi Jim Perren to publish it on his blog, ‘Whitelaw Towers’ — is unexplained. (The caption which accompanies the photo reads “Australia First spokesperson Jim Saleam checks out Asher Goldman’s favorite [childhood] book… hopefully to get some insight into the twisted mind of a Zionist. The inscription reads ‘To our darling Asher on your third birthday love mummy and daddy’.”) After all, it was only a few months ago, in September, that Dr. Jim registered his disapproval of a political prank directed at his party during local council elections: “There are a number of standard lines people tend to trot out when they want to oppose us,” he said. “This Nazi rubbish is one of them”. Being pictured holding a childhood book which once belonged to a young Jewish man — a number of whose relatives perished in the Holocaust — is just… well… c r e e p y.

And just the kind of thing you’d expect from a Nutzi. 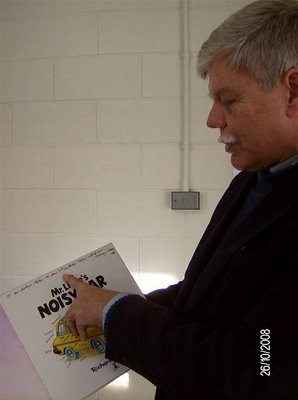 Speaking of anti-Semtiic creeps, and returning to the earlier theme of creativity…

Tales from the Creeps: A White Nationalist Horror Story

In honor of the holiday, the Hatewatch staff dug deep into our photo archives to unearth the creepiest image to crawl out of the white supremacist movement in quite some time. Here you go:

Though it resembles a promotional still from the 1960 horror flick The Brides of Dracula, starring Peter Cushing, the photo (which apparently circulated among white supremacists on the Internet) actually shows Women for Aryan Unity activist Victoria “Vickie” Cahill standing over the embalmed (we hope!) corpse of David Lane, one of the inner-circle members of the Bruders Schweigen, or Silent Brotherhood, a white nationalist terrorist organization also known as The Order…

…Cahill has raised the ire of another prominent female in the white nationalist movement — Abby Chelf, the wife of Randal Krager, leader of the racist skinhead gang Volksfront — by distributing an essay that was harshly critical of Christian Identity, a bizarre racist interpretation of the Bible that is practiced by as many as 50,000 white nationalists, including Chelf.

Titled “Christian Identity, The Synagogue of Satan,” the essay called Christian Identity practitioners “direct enemies of our folk and our Heathen roots” and “a weed that needs to be viciously ripped out.”

Judging by the blistering responses on Volksfront’s website, it’s safe to say Chelf and her fellow Volksfront skins are looking to smash Cahill’s pumpkin.”