Less is more on Stormfront

Damn. A little birdy has apparently been feeding FDB! with more photos, presumably gleaned from the BBQs disgraced former SFDU members David (Innes) and ‘Lilith’ (Peterson) organised once upon a time in Perth. The latest batch features a rather plastered looking Paul Innes (the meanie in the beanie) and perennial losing One Nation candidate Sue Bateman posing provocatively for the camera. 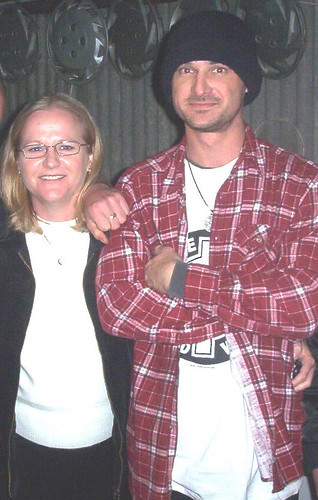 Bateman is not only tipsy, but very tricksy, having denied outright that she was ever a member of the world’s leading white supremacist forum; presumably, she’ll also deny having appeared in a photo with the lovely Paul.

As it stands, Stormfront Down Under is becoming increasingly sad. Those who haven’t abandoned it for browner pastures are now being forced to contend with an influx of trolls, most spectacularly — and amusingly — a teenage ‘social nationalist’ (Stalinist). Otherwise, it’s the usual: complaints about Aborigines in the cashbox, blacks on the streets, Fabians in the Gub’mint, homosexuals in the skools, Indians in the universities, and of course ZOG — everywhere. Plans to combat the Aboriginal / black / Fabian / homosexual / Indian / Jewish menace include placing racist, anti-race-mixin’ stickers on cars, not-forming fascist clubs on campus, indulging teenage phantasies, and generally complaining about the state of the (white) world and how we’re all going to Hell in a multicultural handbasket.

20 Responses to Less is more on Stormfront