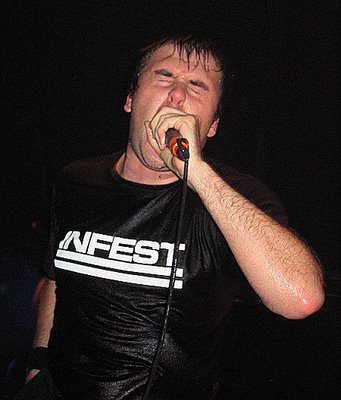 Napalm Death is a metal band, but also a political band, which is a bit of an oddity. How are you received within the metal community?

It varies, really. Some people just don’t want to know about politics, which is fine. That I can totally understand, that’s fine. I draw the line when people are ignorant. That is when you say no, it is not okay.

But there is, obviously, the element of conservative thinking. I guess they think it’s kind of tough, it’s kind of a macho thing. They don’t want to be some kind of lily-livered pinko, I guess. It’s very much a pride thing that I can come out and say what I believe.

There is enough division in punk and hardcore and metal already. It should be about community.

We are not always well received, but people need to remember that while it is first about the music, we also believe in liberty and freedom.

Why do you feel it is important to respond to white power music?

As a musician and a singer, I would have to say it is like a poison spreading. It is a very influential thing. People always talk about Marilyn Manson and that sort of thing being very influential, but, God, this whole white power thing really is a disease. It infects the community and, before you know it, you get these white power bands and they have got this big strength thing. Next thing, they are leafleting people’s mailboxes and spreading their kind of hatred. It is, very much, a sort of spreading thing.

As a musician, I believe not only in the message but in the power of music.

At the end of the day, can you imagine if there was a sort of proto-fascist government, do you think that they would allow anyone to listen to anything that was even remotely sort of subversive? Even this white power music that we are seeing would become some sort of a taboo. It would probably be banned in that type of environment, so they are really not gaining anything.

What can bands [do] to help counter the spread of white power music?

I believe it is multi-faceted, really. Obviously, you can always spread the message on the live circuit. The only problem, I would say to bands to be careful. If you are in a club, like we experienced in Allentown, PA, many years ago, and there’s like 300 white power guys there, it don’t matter what you say, they are going to cave your head in. So you have got to be diplomatic. You have got to force your message forward but you need to be careful. At the end of the day, it defeats the object if you are lying on the ground with a pair of knuckledusters sticking out your mouth. That’s what no one wants. You have got to gauge each situation as it comes.

Aside from that, benefit albums are always a great thing. Obviously, you can take them out on the road; you can help spread the message.

If you feel there is going to be trouble, make sure that you have like-minded people around to take care of you. I know that there’s a lot of different factions in the anti-fascist movement. I know there are peaceful anti-fascists, which is fine, but in a gig situation boneheads don’t fucking care. If they have come to cause trouble they will cause trouble. And you need to respond to that sometime in force. That’s a necessary thing and I fully endorse that kind of action.

In the metal scene, national socialist black metal is received in a variety of ways. On the one hand, there are labels like Relapse Records who publicly state that they will not sell it. On the other hand, there are magazines like Pit who publish interviews and reviews without ever criticizing their racism and anti-Semitism.

What do you think those who care about this issue should do?

These guys have got an agenda. Some of them don’t know what they are talking about. Some of these white power black metal bands are just stupid kids spreading poison, which is dangerous enough in itself. But there are certain bands where you don’t know that their proceeds isn’t going to funding maybe funding mailers [direct mailings – ed], or maybe worse.

You know Resistance Records, which is one of the more well-known ones. We were at Milwaukee Metalfest a few years ago and they had a store there. And it was like, what the hell was this? There were white power kids blatantly walking around and giving me the evils, you know, obviously, trying to provoke me.

This goes to promoters too. Hell, you make enough money. Show some integrity. Stop these people from coming in and infesting the scene. If you think it is any good for the scene, then think again. It is just going to cause all kinds of problems.

What message do you have for those who feel that white power music isn’t a problem for the metal scene?

Use your common sense. Look at what is going on around you. Just think. If there is a long-haired metal guy out there in a band, think of him going to a show where there are boneheads. Imagine walking in and there are tons and tons of boneheads, and just imagine the hassle you are going to get. And now put that into other people’s worlds. Put that, say, into a regular Joe Chinese guy’s life. A Chinese kid who goes to shows and buys your CD’s. Use your common sense. You don’t want boneheads at your shows.

[A much more recent interview with Barney is available here.

DemLeft: …Do your politics ever piss off your fans or your audience?

Barney: Oh yeah. Not necessarily fans. I think most people who like Napalm appreciate the stance and agree with the stance. Certainly not everything. But they certainly would concur with the need to expand your mind and be aware of what’s going on around you.]