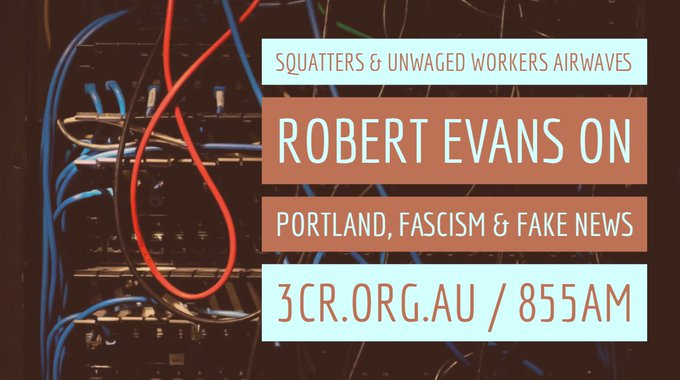 Dr Cam & I done a interview with Robert Evans (Behind the Bastards /// bellingcat) for the August edition of Floating Anarchy on The SUWA Show on 3CR.

You can listen to the podcast version here.

I also recommend listening to Evans’ audiobook, The War On Everyone, from Chapter 1: The Eternal Fascist — ‘There is nothing new under the sun. In this chapter, you’ll learn about “Ur-Fascism”, and how humor and irony have historically been used to enable its rise’ — to Chapter 7: The Digital Reich — ‘This is where we are now: an era where a distributed network of individual extremists are able to radicalize each other and inspire acts of violence worldwide. This is not the result of an unhappy accident, or an unforeseen consequence of the digital era. It’s the result of decades of careful planning.’ 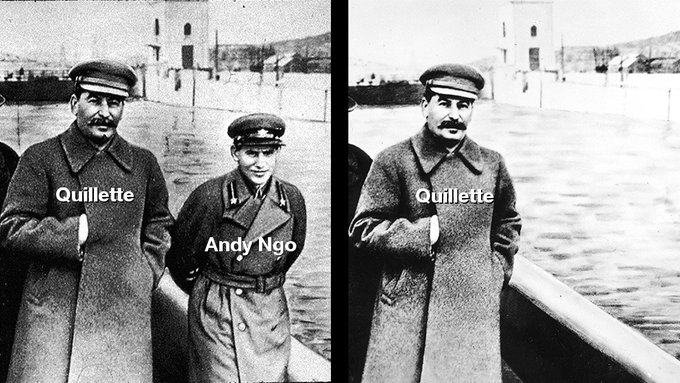 Quillette, ‘The Magazine of Contemporary Phrenology’, has lost one of its contributing editors: Andy Ngo.

You may remember Ngo from when he was mUrdErEd by a hit squad of anTEEfa supersoldiers in Portland a few months ago.

Far-right networks on Twitter are trying to use a hoax spread by an American Conservative news and opinion website a few days ago to blame a mass shooting in El Paso on “antifa” — a loose collective of left-wing activists who focus on combating racism, sexism, xenophobia and other oppressive ideologies … In its July 30 story, the Daily Caller cited Andy Ngo as its source for the claim … And as one of the most prominent foot soldiers in the right-wing’s war on antifa, Ngo never misses a chance to manufacture fear-mongering propaganda targeting his foes.

Anyway, Ngo’s departure from that august intellectual journal Quillette was immediately preceded by the public exposure of his participation in a group which attacked Portland venue Cider Riot on May Day 2019. This has been helpfully documented by Some Guy called ‘Ben’, who infiltrated the group. See : Undercover in Patriot Prayer: Insights From a Vancouver Democrat Who’s Been Working Against the Far-Right Group from the Inside, Alex Zielinski, Portland Mercury, August 26, 2019.

Ngo’s departure from Quillette also followed on from an American Guard/Patriot Prayer/Proud Boys rally in Portland on August 17 to ‘End Domestic Terrorism’ (by way of criminalising anti-fascism). Trump was a YUGE fan of the rally, but it attracted more counter-protesters than it did supporters and, on the whole, apart from a supportive tweet from Cheeto Mussolini — along with celebrations by Fox (etc.) — it was not a suckcess. On the plus side: These Fascists Inadvertently Raised Over $35,000 For A Cause They Hate, Christopher Mathias, The Huffington Post, August 25, 2019 (‘For each member of the Proud Boys or other fascist groups that marched in Portland, counterprotesters pledged money to an Oregon immigrant rights group‘). See also : 1 hammer, 1 ‘antifa mob chase’: A closer look at Portland’s viral protest moments, Shane Dixon Kavanaugh, The Oregonian, August 19, 2019.

Things have been a little tougher for the Lads since: a) their chum Brenton Tarrant slaughtered 51 Muslims in Christchurch and; b) Gruppenführer Tom Sewell declared that if his Lads weren’t able to maintain their cubby huts in Melbourne and Sydney (and Brisbane), they might be tempted, like Tarrant, to turn to violence.

• Last week, convicted racist and serial pest Neil Erikson was (again) charged with disturbing a religious service, after he & AltLite YouTube micro-celebrity Claudia Benitez (‘Dia Beltran’) gate crashed a queer-friendly Christian church in Hawthorn on May 12. Erikson has previously been charged with disturbing a Muslim prayer service in Fed Square in Melbourne and, while a warrant has reportedly been issued for his arrest, has yet to face court for disrupting a church service in Gosford, NSW.

• Also last week, Law & Order campaigner Kim Vuga of the ‘Love Australia or Leave’ micro-party has been embarrassed by the (alleged) criminal antics of her son, Jaimee Ronald Madden, who’s been charged with 15 offences, including armed robbery and carjacking, after an incident in Southport, Queensland.

• Simon Hickey, ‘The Nazi Sparky’ and sometime sponsor of Andrew Anglin’s neo-Nazi website The Daily Stormer, appears not to have enjoyed commercial success by way of his open endorsement of neo-Nazism. Back in late 2018/early 2019, Hickey lost some legal battles; last month (July), Hickey announced that he would be shutting up shop.