antifa notes (august 7, 2019) : The Zodiac Killer ~versus~ anTEEfa! (on the criminalisation of anti-fascism in the united states) 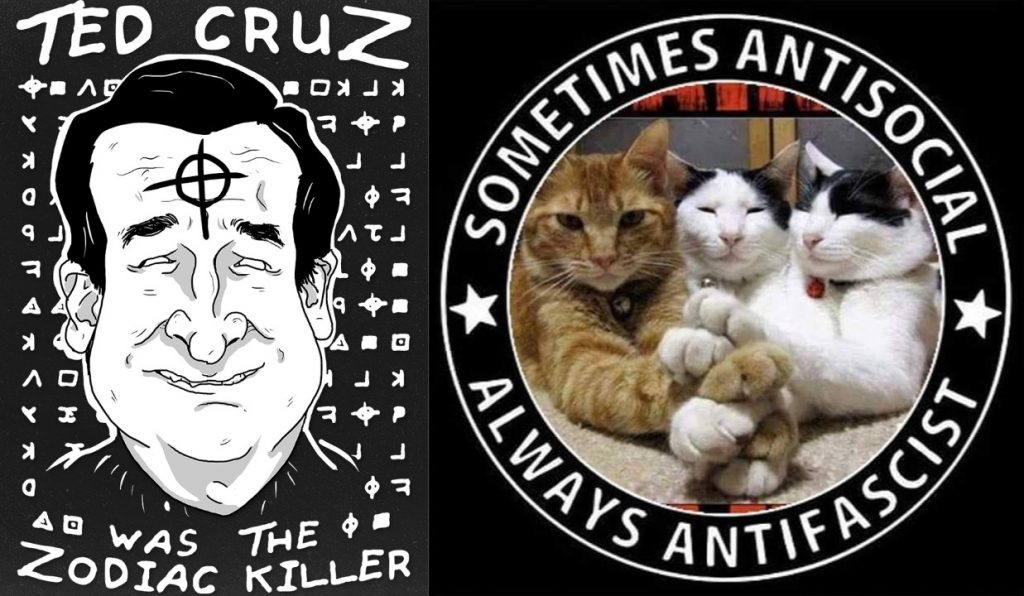 In the United States, moves are being made to criminalise ‘antifa’ as a ‘terrorist organization’; viz, by way of S.Res.279 – A resolution calling for the designation of Antifa as a domestic terrorist organization. The resolution, introduced into Congress on July 18, is sponsored by Louisiana Senator Bill ‘They’re comin’ right for us!’ Cassidy and co-sponsored by The Zodiac Killer (AKA Texas Senator Ted Cruz).

Calling for the designation of Antifa as a domestic terrorist organization.

Whereas members of Antifa, because they believe that free speech is equivalent to violence, have used threats of violence in the pursuit of suppressing opposing political ideologies;

Whereas Antifa represents opposition to the democratic ideals of peaceful assembly and free speech for all;

Whereas members of Antifa have physically assaulted journalists and other individuals during protests and riots in Berkeley, California;

Whereas in February of 2018, journalist Andy Ngo was intimidated and threatened with violence by protestors affiliated with Antifa;

Whereas, on June 29, 2019, while covering demonstrations in Portland, Oregon, journalist Andy Ngo was physically attacked by protestors affiliated with Antifa;

Whereas employees of the U.S. Immigration and Customs Enforcement (referred to in this preamble as “ICE”) were subjected to doxxing and violent threats after their social media profiles, phone numbers, and home addresses were posted on the internet by left wing activists;

Whereas according to the Wall Street Journal [in an August 3, 2018 opinion piece published by the aforementioned Ngo, which cites an anonymous ICE officer], an ICE officer was followed by left wing activists and “confronted when he went to pick up his daughter from summer camp”, and another “had his name and photo plastered on flyers outside his home accusing him of being part of the ‘Gestapo’”;

Whereas the ICE office in southwest Portland, Oregon, was shut down for days due to threats and occupation by Antifa members;

Whereas Rose City Antifa, an Antifa group founded in 2007 in Portland, Oregon, explicitly rejects the authority of law enforcement officers in the United States, and Federal, State, and local governments, to protect free speech and stop acts of violence;

Whereas Rose City Antifa rejects* the civil treatment of individuals the group labels as fascists, stating: “We can’t just argue against them; we have to prevent them from organizing by any means necessary.”; and

Whereas there is no place for violence in the discourse between people in the United States, or in any civil society, because the United States is a place where there is a diversity of ideas and opinions: Now, therefore, be it

Resolved, That the Senate—

(1) calls for the groups and organizations across the country who act under the banner of Antifa to be designated as domestic terrorist organizations;

(2) unequivocally condemns the violent actions of Antifa groups as unacceptable acts for anyone in the United States;

(3) expresses the need for the peaceful communication of varied ideas in the United States;

(5) calls upon the Federal Government to redouble its efforts, using all available and appropriate tools, to combat the spread of all forms of domestic terrorism, including White supremacist terrorism.

The Resolution is interesting for a number of reasons:

• It indicates that the Republicans believe that — along with the routine demonisation and criminalisation of anTEEfa — the passage of this Resolution will assist in God Emperor Trump’s 2020 re-election bid;
• It was followed, just a few weeks later, by the conduct of another massacre by a Trump supporter in El Paso in The Zodiac Killer’s home state;
• It explicitly and repeatedly refers to one organisation, Rose City Antifa (RCA), which has played a key role in fighting fascism and the far right in Portland, the site of a concerted effort by fascists to antagonise, provoke and punish the residents of a ‘liberal’ city;
• RCA has published a Statement on the Far-Right’s Attempt to Criminalize Protest of Concentration Camp Deaths and Hate Groups (July 25, 2019) which is required reading:

On July 18, 2019, two U.S. Senators introduced a resolution attempting to designate “antifa” as a domestic terrorist organization. In a week that saw a Trump rally featuring a racist chant for the deportation of a progressive, black Muslim congresswoman, there can be no clearer sign as to where we are at, than this effort to declare anti-fascism itself illegal. The Republican party is explicitly targeting political opposition. There is no definition of “antifa” outlined in the resolution. “Antifa” is used as a warning. It is shorthand for the dissenters who won’t be brought to heel. If passed, this resolution would be a powerful new weapon for silencing leftists and dissent in the U.S.

In this resolution, the Senators specifically mentioned anti-fascists in Portland, targeting our community for defending itself from the fascists, neo-Nazis, and white supremacists who have assaulted our city for the past three years. Portland has been a target for the most violent elements of the right because of its progressive character. The strategy of the far-right has been to attack the left wherever we have the audacity to exist: in higher education, in Berkeley, at Pride events, at union meetings, at Planned Parenthood, and in a symbolic city of progressive values such as Portland. It is not enough for them to have their own conservative communities, the presidency, the Supreme Court, the Senate, the massive right-wing media apparatus and funding base; they also must harass, violently attack, and terrorize anyone anywhere who dares to disagree with their oppressive views.

The rationale for this resolution is a manufactured threat which only exists in the absence of critical thought and inquiry. The greatest domestic political threat in the U.S. today is the far-right. The far-right committed 98% of ideologically-driven murders in 2018. We have seen that death toll here in Portland. Larnell Bruce, a black teenager, was brutally murdered by a white supremacist outside a 7-11 in 2016. In 2017, Jeremy Christian, a Patriot Prayer rally attendee and white supremacist, fatally stabbed two passengers and seriously injured a third passenger on a Portland MAX train after they attempted to stop him from harassing two women of color. Proud Boys have driven around our city streets looking for people to assault. LGBT+ community members have been repeatedly attacked, and they have been called liars when they organize to defend themselves. The Portland Police Bureau has assisted the right at every turn. Stories like this are echoed all over the country. This is the true threat of our times …

A little later (July 28), Cheeto Mussolini made noises about joining the anti-antifa crusade, twatting that ‘Consideration is being given to declaring ANTIFA, the gutless Radical Left Wack Jobs who go around hitting (only non-fighters) people over the heads with baseball bats, a major Organization of Terror (along with MS-13 & others). Would make it easier for police to do their job!’. 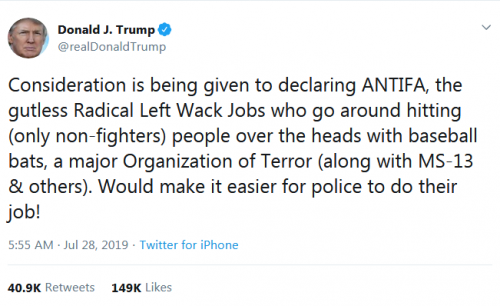 For what it’s worth, MS-13 is a crime gang with origins in California in the 1980s (see : MS-13: A GANG PROFILE, Jennifer J. Adams and Jesenia M. Pizarro, Journal of Gang Research, Vol.16, No.4, Summer 2009 [PDF]). MS-13 occupies considerable space not only in California but in the US President’s bRanes, and often serves as a substitute for ‘Hispanic immigrant’ in Republican discourse. MS-13 also has a lengthy record of spectacular violence, but to the best of my knowledge, only one person has been killed by anTEEfa in the US in the last 25 years. Thus on January 1, 1993 in Portland there was an altercation between armed boneheads and SHARPs, and one of the boneheads, Erik Banks, was shot dead by one of the SHARPs, who was later sentenced to five years in prison for first degree manslaughter. 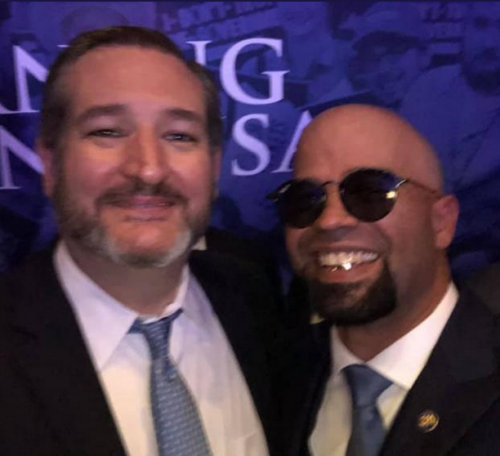 The Presidential vomit of July 28 was apparently inspired by an unsuccessful petition organised by Proud Boy führer (and ‘Unite The Right’ attendee) Enrique Tarrio (pictured above with Cruz). Thus on June 30, 2019, Tarrio wanted his Daddy to ‘label Antifa a domestic terrorist organization’, claiming inter alia that ‘members of Antifa brutally assaulted an independent journalist, who remains hospitalized with a brain bleed after being viciously beaten and doused in liquid concrete’, a reference to right-wing propagandist and Quillette editor Andy Ngo’s adventures in Portland at a Proud Boy rally. See : This Week in Fascism #20: Cruzin’ for a Bruising, It’s Going Down, July 29, 2019.

The Democratic Socialists of America (DSA) held its national convention in Atlanta over the weekend. Among the various resolutions debated and discussed at the convention was Resolution #9: “Establishing a National Anti-Fascist and Direct Action Working Group”. 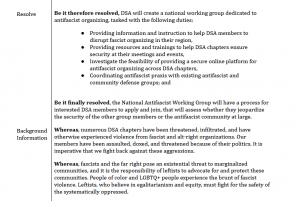 The resolution was narrowly passed (521 votes FOR vs. 493 votes AGAINST), but what this means in terms of praaaxis is unclear. Opposition to the resolution was presumably for a range of reasons, but This Guy provides a summary, which hinges upon the ways in which the resolution may provide a pretext for the political repression of the DSA, along with some general observations about anti-fascist work and whether or not the DSA is best-placed to undertake it.

Finally, 8chan is undergoing some technical difficulties at the moment, prompted by the El Paso killer’s posting his manifesto to the site, the subsequent removal of Cloudflare protection, the h8ball being picked up by Epik’s BitMitigate, then Epik being dropped by its provider, Voxility. So: it may be a few days before 8chan is back up and running and resumes pumping out neo-Nazi and white supremacist propaganda.

* This passage is an extract from RAC’s FAQ: The best way to defeat fascism is to let them express their views so that everyone can see how ignorant they are. Can’t we refute them more effectively with ideas than force?

People don’t become fascists simply because they’re persuaded by their ideas. Fascism claims to offer power to those who feel threatened by shifting social and economic realities. The fact that their analysis of these shifts are ignorant misses the point; do we need to cite examples of how dumb ideas have proved massively popular throughout history? From Italy to Germany to streets around the world today, fascists haven’t gained strength through rational argument, but through organizing to wield power at the expense of others. To counter this, we can’t just argue against them; we have to prevent them from organizing by any means necessary. We can debate their ideas all day long, but if we don’t prevent them from building the capacity to make them reality, it won’t matter. Only popular self-defense, not simply debate, has succeeded in stopping fascism.

3 Responses to antifa notes (august 7, 2019) : The Zodiac Killer ~versus~ anTEEfa! (on the criminalisation of anti-fascism in the united states)