Did I happen to mention I gotta patreon? 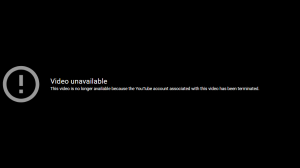 • In response to mounting public criticism, and in an attempt to forestall legal and financial penalties, Facebook, Twitter & YouTube have announced, each in their own way, that they’ll remove bAd content: ‘hate speech’, mostly (see : YouTube bans videos promoting Nazi ideology, Jim Waterson, The Guardian, June 6, 2019: ‘Content promoting fascism, supremacism or Holocaust denial will no longer be hosted’; YouTube bans neo-Nazi and Holocaust-denial videos in push against hate speech, Jon Brodkin, ars technica, June 6, 2019). Obviously, the rollout has had uneven effects, and been marked with the incompetency that’s now a hallmark of the social media giants’ attempts to placate lawmakers and publics … but it does represent an interesting moment in corporate policing.

In any event, much of the ongoing drama revolves around a harassment campaign conducted by right-wing blabbermouth Stephen Crowder against a Vox journalist, Carlos Maza, and the shambolic attempts by the corporation to respond to it. See : Here’s Everything You Need To Know About YouTube’s Chaotic 24 Hrs, Brad Esposito, pedestrian, June 6, 2019 | YouTube’s plan to fix hate speech failed before it even started, Chris Stokel-Walker, Wired, June 6, 2019 | YouTube Bravely Bans Nazis Hours After Throwing LGBT Users Under The Bigot Bus, Bryan Menegus, Gizmodo Australia, June 6, 2019. 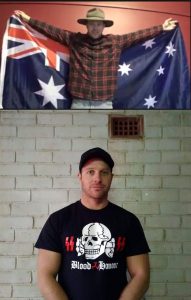 As a result of YouTube/Google/Alphabet’s crackdown this week, a smol number of Australian channels have been closed, including ‘AustralianMeditations’, ‘BringingBackTheMan’ and ‘genocidal88’. The first belonged to ex-Liberal Party student Stefan Eracleous, the second to Shermon ‘The Great Aussie Patriot’ Burgess (remember him?) and the third to the boneheads of Blood & Honour Australia/Southern Cross Hammerskins. ‘Thousands’ of other accounts have been removed, according to reportage, though it’s unclear precisely precisely which. Further, while some antisemitic and white supremacist channels have had their ability to generate revenue compromised, as Wired reports, ‘The YouTube channels of David Duke, Richard Spencer, Lauren Southern, and many other white supremacist figures remain on the site’ (YouTube Is Banning Extremist Videos. Will It Work?, Paris Martineau, June 5, 2019).

Another local serial pest, Stephen Yaxley-Lennon fanboy and YouTuber, Avi Yemini, has had his channel demonetised; Yemini is due back in court next week (June 13) to fight charges including ‘that he injured, harassed and threw a knife at the face of a woman’. YouTuber Claudia Benitez (‘Dia Beltran’) — who once allegedly sent an antisemitic text to Yeminem — has starred in an article in The Guardian titled Victorian Liberals fear far-right incursions as YouTuber attends party event (Christopher Knaus and Michael McGowan, June 5, 2019). Benitez has regularly interviewed various luminaries on the Australian far-right, including Cottrell, Erikson and Yemini, along with The Fake Sheikh, PHONy’s Mark Latham, Robert Spencer, Thomas Brasher (The Lads Society), Eurydice Dixon memorial vandal Andy Nolch, ex-United Patriots Front and Australia First Party member Chris Shortis, Fraser ‘Final Solution’ Anning, Daisy Cousens and various other, even lesser-known figures; her most-popular video, however, remains one about ‘rude customers’.

• Neo-Nazi bodybuilder Blair Cottrell (The Lads Society/YouTube) had a court hearing this week, the final one before his appeal against a criminal conviction for religious vilification commences on August 12; Cottrell and his lawyer, John Bolton, are arguing that the Act under which he was convicted — the Victorian Racial & Religious Tolerance Act (2001) — is in fact un-Constititional. 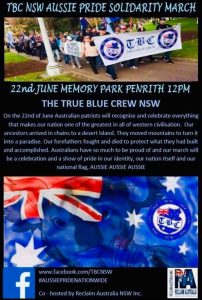 • The True Blue Crew — one of the groupings that, along with the United Patriots Front, the alleged Christchurch killer, Brenton Tarrant, gave props to — has organised a flag parade in Sydney (Penrith Park) on Saturday, June 22. Co-sponsored by a segment of Reclaim Australia, it will presumably attract a similar number as last year’s event, it in turn inspired by similar rallies in Melbourne (2016/2017/2018).