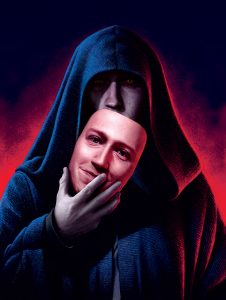 Zuck: Yeah so if you ever need info about anyone at Harvard
Zuck: Just ask
Zuck: I have over 4,000 emails, pictures, addresses, SNS
[Redacted Friend’s Name]: What? How’d you manage that one?
Zuck: People just submitted it.
Zuck: I don’t know why.
Zuck: They “trust me”
Zuck: Dumb fucks

In response to criticism of the corporation for livestreaming the Christchurch massacre and its function as central hub for the promotion of antisemitic, racist, sexist and white supremacist propaganda, last week Facebook’s Chief Operating Officer, Sheryl Sandberg, published a statement on Instagram (one of Facebook’s numerous other holdings) titled ‘By Working Together, We Can Win Against Hate’ (March 29, 2019). 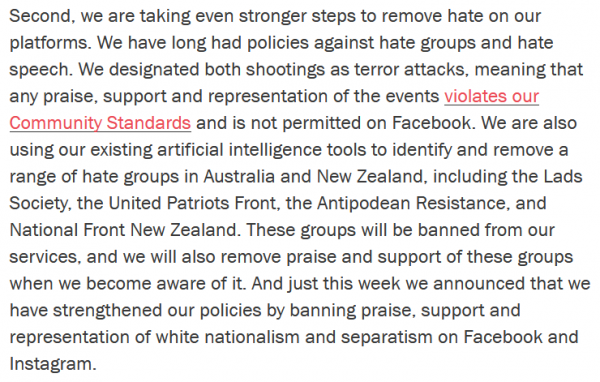 It’s a rather odd statement, for a number of reasons. But inre this passage in particular, it’s worth noting that:

• While ‘The Lads Society’ & ‘National Front New Zealand’ pages were recently removed;
• ‘Antipodean Resistance’ never published a page on the site (though its membership is of course active on it);
• The ‘United Patriots Front’ page was deleted almost two years ago (May 2017);
• Neil Erikson’s page ‘Nationalist Uprising’ was also recently unpublished, along with four pages associated with the ‘True Blue Crew’ (NSW, QLD, SA, WA) — presumably on the basis that the Christchurch killer gave props to the TBC, & Erikson is a former member of the UPF (about whom the killer also made complimentary remarks & donated money to in order to support its work) [NB. The TBC QLD page — first published as ‘T.B.C Gold Coast’ on 18 August 2017, then QLD TBC Gold Coast (23 April 2018), then QLD TBC True Blue Crew (5 October 2018) — is up & running @ https :// www . facebook . com / QLD-TBC-True-Blue-Crew-452549338464095; TBC NSW has buggered off to gab];
• Finally, there are any number of associated pages — including but not limited to ‘Australian Meditations’, ‘Cooks Convicts’ & ‘Future Now News’ — that have featured Erikson & others’ ‘hateful’ diatribes, & that happily remain on the platform.

As I see it, these public relations offerings are primarily geared towards mitigating attempts by various jurisdictions to develop & implement laws which, financially & otherwise, would penalise FB for promoting racism & xenophobia, fascism & White supremacy (Facebook was ranked No.76 in the 2018 Fortune 500 list of the largest United States corporations by revenue (US$ 55.838 billion)). In any case, there of course hundreds of Facebook pages and groups dedicated to cultivating hatred for Muslims and demanding the criminalisation of Islam in Australia, along with those promoting neo-Nazi, fascist and white supremacist doctrines. Below is a list of 50 that are either dedicated to one or all of the above, or which feature similar materials. Those belonging to MPs are a protected species, but others are theoretically not afforded such protections, and if Sandberg’s policy were implemented would likely be deleted and, as usual, reappear under another guise.

5) Australian Liberty Alliance (25 March 2014–)
https://www.facebook.com/australianlibertyalliance
• The Islamophobic ALA, a micro-party registered (28 July 2015) with the AEC which recently applied to change its name to ‘Yellow Vest Australia’, is an outgrowth of The Q Society. (One of its admins is based in France.)

6) Australian Meditations (9 May 2018–)
https://www.facebook.com/Australian-Meditations-174182726624687
• A page which promotes Neil Erikson and which is adminned by one of his Melbourne fanboys, Stefan Eracleous, a former treasurer of the Young Liberals @ the University of Melbourne. ‘Club treasurer Stefan Eracleous describe[d] Ms Greer as a ”lying f—ing c-m guzzling slut … and a union member”. ”She doesn’t believe in God. No kids not married … what do you [e]xpect from a melb uni educated former socialist c—,” he wrote. He also refers to London as ”the gay capital of the world” and appears to hit out at Muslims, telling a friend: ”Just be careful of those mussrats. A lot of them are [a] bunch of Third World degenerate c—s.”’ See : Misogynist rants from Young Libs, Henrietta Cook and Farrah Tomazin, The Age, August 10, 2014.

15) CC (Cooks Convicts) (2 August 2018–)
https://www.facebook.com/CooksConvicts
• Another one of Erikson’s platforms.

23) Future Now News (25 June 2018–)
https://www.facebook.com/futurenownews
• A project of Queensland businessmen Ben & Dan Spiller, their main page, Future Now Australia, has been deleted. Another page in which Erikson has played a role.

26) Kim Vuga Love Australia or Leave Party (25 July 2015–)
https://www.facebook.com/KimVugaLoveAustraliaorLeaveParty
• LAOL is a micro-party registered (16 October 2016) with the AEC. Vuga became a micro-celebrity on the right courtesy of SBS.

28) Malcolm Roberts (2 May 2016–)
https://www.facebook.com/malcolmrobertsonenation
• Roberts is a former Australian Senator for Pauline Hanson’s One Nation Party.

32) PDLA Patriots Defence League – Australia (30 March 2014–)
https://www.facebook.com/PDLA-Patriots-Defence-League-Australia-237357993132774
• One of numerous PDLA pages. The PDLA emerged as a splinter from the Australian Defence League, itself an Australian version of the English Defence League, and memorably once claimed to be a women’s right organisation. See : Anti-Islam group deregistered for masquerading as domestic violence group, Bianca Hall, The Age, July 2, 2015. One admin is based in the UK.

35) Royal Australian Infidel (30 April 2014–)
https://www.facebook.com/rainfidel
RAInfidel (30 April 2014) > Royal Australian Infidel (8 May 2014)
• RAInfidel specialises in selling anti-Muslim merch. In August 2016, veterans’ organisation Legacy announced it would no longer accept a proportion of the profits the business had donated to it. At the time it was reported in the Herald Sun that the page had suggested nuclear weapons could be a solution to Islamic terrorism. Another T-shirt design says “if your religion is worth killing for please start with yourself.” See : Detention centre guards suspended over social media posts, Joshua Robertson, The Guardian, April 14, 2015.

40) Senator Fraser Anning (8 December 2017–)
https://www.facebook.com/senatorfraseranning
• A white nationalist politician who enjoys consorting with neo-Nazis, including members of The Lads Society and the UPF, the Senator notoriously called for a ‘Final Solution’ to ‘The Immigration Problem’ in his maiden speech to federal parliament in August 2018. Regarded by many white nationalists and neo-Nazis as /Our Guy/ in parliament. See also : Fraser Anning staffer and alleged Nazi enthusiast employed by Home Affairs, Nicole Hasham, The Sydney Morning Herald, March 22, 2019.

46) The Unshackled (17 September 2016–)
https://www.facebook.com/TUnshackled
• Oddly, two of the admins for Timmeh! Wilson’s page are located in Kosovo. According to a recent report by the ABC: ‘A network of popular Facebook pages that have built large audiences catering to Australians agitated over hot button issues such as Islam, refugees and political correctness is under the control of trolls and scammers from the Balkans who profit from the outrage they stir up… The Facebook pages have a combined fanbase of 130,000-plus, which has been built up over several years. The oldest and most popular page, “Australians against Sharia”, has been publishing since June 2013. The three other pages are called “Aussie infidels”, “Stop the Mosque in Melbourne” and “Stop all Mosque in Narre Warren” (sic). Narre Warren is a suburb on the south-east outskirts of Melbourne.’ See : Facebook trolls and scammers from Kosovo are manipulating Australian users, Michael Workman and Stephen Hutcheon, ABC, March 16, 2019.

47) Truthies (16 August 2017–)
https://www.facebook.com/TruthophobesCuttingDownEvil
• Truly one of the more entertainingly bathshit of the pages listed here.

48) UNA Media (4 June 2017–)
https://www.facebook.com/UnitedNationalistsAustralia
• An online shitsheet for the white nationalist Australia First Party. Its chief writer, Nathan Sykes, one of Australia’s most prominent far-right extremists, was recently charged with making repeated and explicit violent threats against a Melbourne journalist and lawyer. Another contributor, Chris Shortis, is a former member of the UPF who in September 2017 was found guilty of religious vilification.

Facebook has demonstrated its reluctance to comply with the law, and we can’t expect it to sacrifice profit for ethics unless it is required to. Serious and substantial penalties for failure to comply would be an incentive to ensure Facebook and Instagram do what they are currently reluctant to do.