May Day & Repression of Anarchists in Indonesia 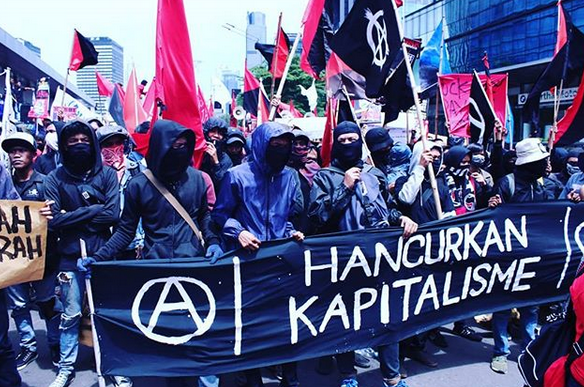 Some May Day celebrations in Indonesia got a bit rowdy this year, triggering a predictable response from authorities.

Anarchists elsewhere are being asked to express solidarity with our compañerxs in Indonesia.

Indonesia: May Day Clashes in Bandung- Over 200 Arrests, Detainees Tortured [Updated]
mpalothia
May 2, 2019

Indonesia: Statement from Catut Anarchist Library about May Day Repression in Bandung
mpalothia
May 2, 2019

Anarchist Resistance and Repression in Indonesia
AMW English
May 3, 2019

Inside the Growing Indonesian Anarchist Movement
It’s Going Down
May 7, 2019

I live in Melbourne, Australia. I like anarchy. I don't like nazis. I enjoy eating pizza and drinking beer. I barrack for the greatest football team on Earth: Collingwood Magpies. The 2021 premiership's a cakewalk for the good old Collingwood.
View all posts by @ndy →
This entry was posted in Anarchism, Anti-fascism, Broken Windows, History, Media, State / Politics, That's Capitalism!, War on Terror and tagged Anarchism, Indonesia, May Day. Bookmark the permalink.

1 Response to May Day & Repression of Anarchists in Indonesia