Update (October 16, 2019) : According to this report by Zach Hope (The Age), the nazi pop concert was cancelled … No show: Melbourne’s neo-Nazi concert ‘cancelled’.

The gig — contrary to ABC reportage — is the Ian Stuart Donaldson memorial gig, not the Hammered Festival; Donaldson, who died in a car crash in 1993, was the person chiefly responsible, along with fellow bonehead Nicky Crane, for establishing B&H in the UK in 1987.

The ISD gig, which has been held in Melbourne annually for about the last 25 years, is as in years previous being held at an undisclosed location. (Previous venues have included the Birmingham Hotel in Fitzroy, the Melbourne Croatia Social Club in Sunshine, the Beaconsfield Hotel and river cruises on the Yarra.)

Unlike previous years, and presumably as a result of the Christchurch and other recent massacres by extreme-right actors, this year’s gig has generated some media attention and also opposition. Among other things, GetUp! has generated a petition with 28,000 signatures to ‘demand the Federal and Victorian Governments shut this concert down and ensure neo-Nazis have no place to spread hate in our community’.

The Andrews’ state government has responded by noting that the neo-Nazi gathering is entirely lawful. 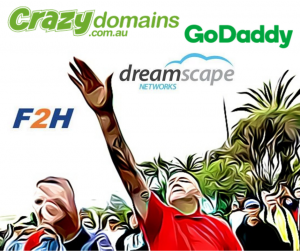 Since the petition went up, Fast2Host (UK) have removed the Southern Cross Hammerskins website from their server, but GoDaddy (US) is committed to ensuring that 9% Productions and Blood & Honour Australia are able to promote neo-Nazism.

So … the gig is going ahead, there’ll be a gathering of around 50–100 neo-Nazis in Melbourne this weekend, and if you spot any, feel free to lemme know.

Along with Andrew Bolt, both AFP and TLS are hopping-mad about the fact that, on the occasion of the 70th anniversary of the founding of the People’s Republic of China, Box Hill cop shop briefly flew the Chinese flag. But while the Pell Defender will presumably be busy doing other things on Saturday, AFP and The Lads will be gathering outside the police station to have a whinge. Previously, Lads fuehrer Tom Sewell ranted about China and Japan outside the station to an audience of a handful of other neo-Nazi Lads. 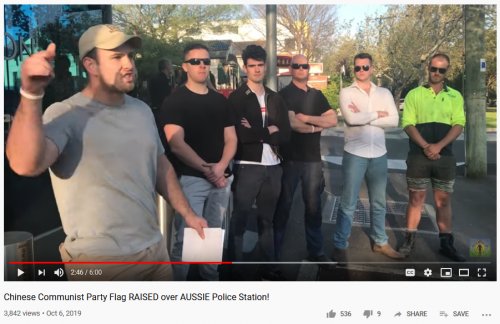 Speaking of nazis with bad tempers …

A Sydney man linked to a white nationalist party has been committed to stand trial after allegedly threatening to smash a Melbourne lawyer and journalist “to a pulp”. 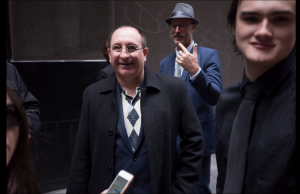 Nathan Jacob Sykes, aged in his 50s, has been charged with five offences after he allegedly used a communications device to threaten serious harm, menace and harass freelance investigative journalist Luke McMahon.

Sykes, who has denied the charges, said nothing in Downing Centre Local Court on Tuesday as magistrate Jennifer Atkinson committed him for trial in the District Court on October 25.

He was accompanied by his lawyer but – unlike his first court mention in April – far-right extremist and leader of the Australia First Party Jim Saleam was not by his side.

Saleam has repeatedly blogged about the case and Mr McMahon since charges were laid, naming Sykes as an AFP member.

According to the police charge sheet, Sykes threatened the journalist in January 2018 that people would “stick you out in Melbourne and smash you to a f***ing pulp”.

“You dumb f*** you’re out of your f***ing league and you’re dead,” police allege Sykes said.

Another offence the same month allegedly involved a threat to “stamp your f***ing teeth into the sidewalk”.

His bail conditions ban him from entering Victoria, going within two kilometres of the University of Sydney or leaving the country.

Sykes is also banned from contacting Mr McMahon or posting comments on social media or traditional media that relate to the lawyer or his family.

• Oh. Also on Saturday there’s the annual ‘March for Babies’. Last year, the march organisers employed TLS to provide security for the event, which naturally attracted the support of all the usual dregs. Speaking of which …

• Avi Yemini has recently joined Neil Erikson in trying to troll protesters in Melbourne. Both naughty boys have upcoming court dates for engaging in similar acts of idiocy in the past, and can be guaranteed to carry on in precisely the same manner in future. Thus a few weeks ago Yeminem announced that he’d been charged with five offences over his conduct at last year’s state election; in July, he was found guilty of unlawfully assaulting his former partner, using a carriage service to harass, and breaching an IVO. He got some tiny fines as a result. Yemini’s next court dates are in Melbourne Magistrates’ (November 6) and Moorabbin (November 28), while Erikson’s next court dates are scheduled for November 1 (below Erikson & Yeminem have a yarn at a right-wing rally).

Oh yeah — a shity rock band in Sydney called ‘The Rampants’ caused a fuss at a gig in Sydney at the beginning of the month, when they attacked some teenagers at a show at Staves Brewery. See : Riot averted at teen punk show in Sydney, The Music Network, October 1, 2019.

The responsible band — not mentioned in the report — is called ‘The Rampants’. They’ve since deleted their Facebook page — https://facebook.com/therampantspunk — but are still cranking out the hits on Bandcamp. The band is very closely connected to Sydney United Supporters / Cheeky Terrace Youth, who are mAdly in love with Mister Adolf Hitler & Mister Ante Pavelić. One band member, Christian Pervan (vox/gits), has been a very naughty boy in the past: in 2015, he copped a 5-year ban by Football NSW (PDF).