For reasons which remain unclear, Rowan Dean — world-renowned satirist, former ad-man, and current editor of The Spectator (Down Under) — has pulled two articles by Some Guy called ‘Moses Apostaticus’. 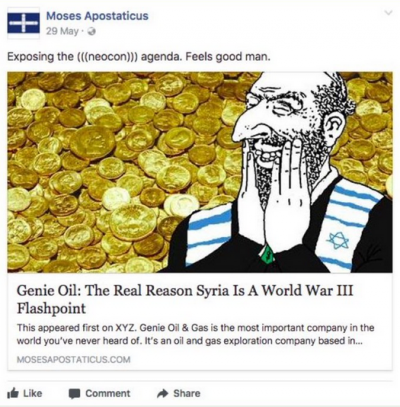 The decision to pull the articles — ‘The Democratic Socialist People’s Republic of Australia’ (July 6, 2017) and ‘How cultural Marxism created the Alt-Right’ (July 12, 2017) — happened just a day or so after Jeff Sparrow published ‘Dr Goebbels’ mastheads’: on antisemitism and News Corp (Overland, July 13, 2017), and after Richard Cooke drew attention to some of the nazi geek’s other online writings.

While Rowan may be one of the most respected and most creative figures in Australian advertising circles, responsible for helping to sell best-known brands including Nurofen, Mortein, Harpic, Finish and Dettol, he’s also allegedly a keen observer and critic of the ever-merging worlds of PR gimmickry, political dishonesty and manipulative ‘spin’.

Which begs the question: why decide to publish, then unpublish, such a brilliant man as Moses? One with lots of well thought-out, practical ideas, who is ensuring the financial security of The Spectator for years to come?

In any event, maintaining the paper-thin barrier between the usual batshit published by The Spectator & Co, on the one hand, and the unabashedly anti-Semitic and frequently neo-Nazi tripe published by aspiring AltRight bloggers and podcasters, on the other, is no easy feat: mostly, it’s accomplished by way of substituting the national flag for the Nazi one and, say, ‘cultural Marxism’ for ‘Jewish conspiracy’. Providing these basic rules are followed, it’s perfectly acceptable for anti-Semitic cranks to find a corner of the reactionary press in which to appear, and with a *nudge nudge, wink wink* to their audience, communicate precisely what they think. Indeed, play your cards right, and the national broadcaster will grant you an hour of prime time in which to promote yourself (albeit on delay).

As for Moses, you can continue to enjoy his writings on millionaire blabbermouth Tucker Carlson’s The Daily Caller website, and look forward in anticipation to the completion of his PhD thesis. You can also listen to him yap on ‘The Dingoes’ podcast, along with his XYZ kameraden Ryan Fletcher and Adam Piggott, MP George Christensen, former MP Mark Latham, racist Canuckistanian (and former academic) Drew Fraser and Greg Johnson of publisher Counter-Currents. Gregory Lauder-Frost of the Traditional Britain Group has also been a guest of The Dingoes, and his ‘exposure’ as a ‘Tory fringe group leader with Nazi sympathies’ rather closely resembles the comic habit of local Tories accidentally-stumbling-into-fascist-meetings, most recently when MP Craig Kelly wished a ‘Happy Birthday!’ (on behalf of former PM Tony Abbott) to the pro-Nazi Ustaše government of the 1940s.

Presumably, Rowan Dean is unlikely to publish a piece celebrating the destruction of ‘cultural Marxism’ at Jasenovac, but if he did, I wouldn’t be surprised if the facts of its removal — like so much else — simply disappeared down The Memory Hole.