[I stumbledupon this vid again the other day, courtesy of the scallywags of Anti Fascist Action Sydney (see : With Friends Like These… Tim Anderson & NSW’s Fascists, May 2, 2017), so I thought I may well as chuck it up here along with a few additional comments of my own.]

While it’s true that politics makes for odd bedfellows, it’s an unedifying spectacle to witness an ostensible leftist address a gathering of the extreme-right, in this instance University of Sydney academic Tim Anderson addressing the Leura Forum in November last year. In front of a banner reading ‘One People. One Destiny. One Flag.’, the brief vid below (the full vid is avail online elsewhere) begins with a very subtle dis of The Gay Mafia and a prayer for God Emperor Trump by the MC (dentist Dr Jim Sternhell), followed by a few words from Tim, interspersed with complaints about Jews from an audience member, Ross May. 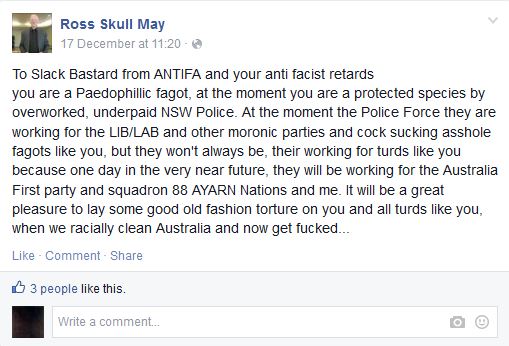 Apart from anything else, the presence of geriatric neo-Nazi Ross ‘The Skull’ May in the front row of Tim’s audience brings to mind another academic from Sydney, Peter McGregor (1947–2008). An anarchist and a political activist in addition to being an academic, McGregor participated in numerous campaigns, groups and projects during his too-short life. This included participating in the campaign to free one Tim Anderson from jail after he was framed for the Hilton bombing (1978).

Peter’s activities, especially in the name of anti-racism, naturally antagonised fascists and the far right. Hence: ‘The Australian Nazi Party, ideologically aligned with apartheid, organised a brutal and cowardly assault on McGregor in 1971 which I witnessed. Its propagator, one Ross Lesley May (aka “The Skull”), subsequently served time; but the police more often than not acquiesced in Nazi violence and that of fellow racists and the more fanatical rugby fans, who were often inseparable.’

Note that the speaker who followed Tim, Dr Jim Saleam, was also a member of the Australian Nazi Party at this time, while the speaker who preceded him, Keith Windschuttle, has also had some interesting things to say about genocide, and history.

The situation is ironic, perhaps, but hardly a fitting tribute.

7 Responses to Dr Tim Anderson has some funny friends