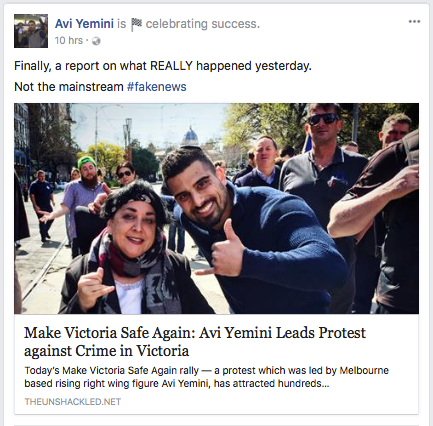 Yeah well anyway, I thought I might just note in passing some of Avi Yemini’s fanbase among the extreme-right.

To begin with, unhappy with the media reportage of his hate rally on Sunday, Avi instead recommends everybody read the report on the ‘altright’ website ‘The Unshackled’ (2016–) by Tom Pirrone. According to Tom, ‘hundreds’ attended Avi’s shindig — which is about as accurate as most of the reportage on the site, which otherwise reflects the preoccupations of the Tory yoof which constitutes its audience.

The Unhinged editors of The Unshackled are Tim Wilms and Sukith Fernando (above). Like many other #altright yoof, Sukith is a card-carrying member of the Liberal Party, and it was while campaigning for student elections that Sukith got into some hot water at the University of Sydney last week. Thus according to Honi Soit (Holocaust denying student confronted on campus, Kishor Napier-Raman and Aidan Molins, September 15, 2017): ‘Fernando was confronted on Eastern Avenue by members of both Stand Up (Labor) and Switch (Grassroots/independents) who questioned him about his beliefs. Fernando repeatedly claimed that he “didn’t know” whether the Holocaust happened.’ He is also reportedly a member of multiple right-wing Facebook groups, including one called ‘Holocaust Revisionism’.

As was the case with University of Queensland student David Hilton (‘Moses Apostaticus’), being an anti-Semite and Holocaust denier is no barrier to being adopted by more mainstream publications, including The Spectator. Thus in July Sukith contributed a sterling essay to the site (Goodbye Yassmin and #PrayForLondon, July 13, 2017) celebrating Yassmin Abdel-Magied’s decision to leave Australia for London, while also deriding her for her alleged apostasy and racism. For its part, the Liberal yoof who’ve assembled behind the ‘Vanguard’ banner to contest the election have denounced Sukith for his public expressions of racism, anti-Semitism and Holocaust denial and informed the world that, if elected, Sukith will not hold office. On the other hand, Sukith’s brave stand against The Jew at his university did at least win the approval of neo-Nazi and former Grand Poobah of the KKK, David Duke, so that’s something eh. 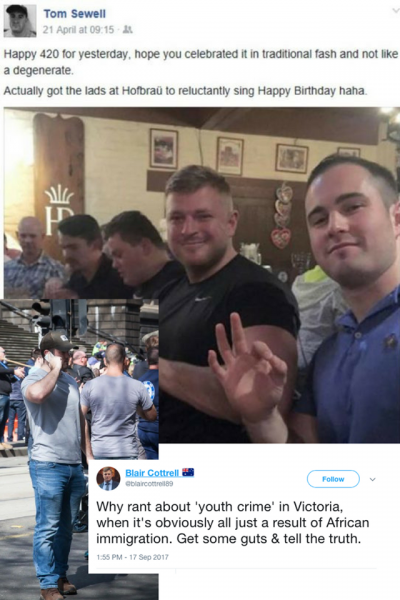 Leaving aside Sukith, as noted previously, the main body of supporters at Avi’s rally on Sunday were drawn from pre-existing extreme-right street gangs, especially the Soldiers of Odin and True Blue Crew. Funnily enough, apart from ignoring actually-existing laws and legal processes, the implementation of the rally’s demands — minimum sentencing for violent offenders (including minors), no bail for persons charged with violent offences, no parole for those convicted for violent offences, minors to be incarcerated in adult jails and the deportation of immigrants convicted of violent offences — would actually decimate his support base.