It was a lovely day for a stroll in the city today.

A few dozen racist gronks (Party for Freedom, Soldiers of Odin, True Blue Crew and various other fascist zombies) attended a rally organised by tabloid favourite Avi Yemini (above); several hundred others attended a counter-protest. Otherwise, apart from the shouty, not much happened: one person was detained by police and issued a move-on notice for wearing a face covering; Neil Erikson tried to gatecrash Die PARTEI but was told to shoo.

That’s about it, really.

(Oh, and props to everyone who rocked up to tell Avi and his fascist mates to bugger off.) 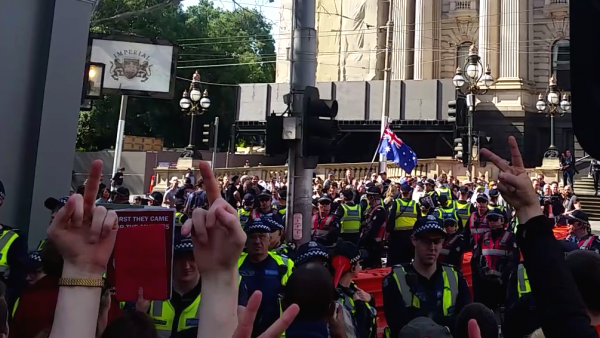 I live in Melbourne, Australia. I like anarchy. I don't like nazis. I enjoy eating pizza and drinking beer. I barrack for the greatest football team on Earth: Collingwood Magpies. The 2021 premiership's a cakewalk for the good old Collingwood.
View all posts by @ndy →
This entry was posted in !nataS, Anti-fascism, Media, State / Politics and tagged Avi Yemini, Reclaim Australia, Soldiers Of Odin, True Blue Crew, United Patriots Front. Bookmark the permalink.