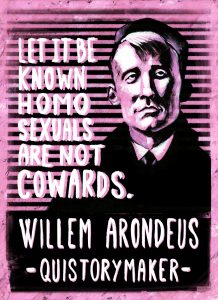 This post is dedicated to the memory of Willem Arondeus, the gay Dutch resistance member executed by the Nazis in July 1943 and Righteous Among the Nations.

This Saturday in Sydney, Nick Folkes and his Party for Freedom (PFF) are holding an anti-marriage equality rally (‘Straight Lives Matter’) at Green Park (corner of Victoria & Burton Streets), Darlinghurst. Folks in Sydney have organised a counter-protest for which there’s a Facebook event page here.

Green Park is the site of the Sydney Gay and Lesbian Holocaust Memorial and just a hop, skip and a jump to both the Sydney Jewish Museum and the Jewish War Memorial and Museum. Fitting, then, that the list of attendees at the hate rally includes anti-Semites, neo-Nazis and Holocaust deniers. According to a report on news.com.au (Far right nationalist Party for Freedom to hold ‘Straight Lives Matter’ anti-same-sex marriage rally, Benedict Brook, September 20, 2017):

The party’s leader, Nick Folkes, told news.com.au being gay was a choice and called people who didn’t identify with their biological gender “retards”.

Provocatively, the protest is being held in the Sydney suburb of Darlinghurst, famous for its large LGBTI population and metres from a memorial to murdered gays and lesbians.

The group was unapologetic for holding the rally next to a monument mourning gay people executed by the Nazi regime during the Holocaust.

“We want to make a strong point — I don’t feel we’re provoking anyone, we can hold a rally anywhere,” Mr Folkes said. He said “yes” campaigners could hold a march in a “straight area”.

NSW Police confirmed they would be in attendance at the event.

(Police in Gothenburg, Sweden will also be providing an honour guard for a neo-Nazi march less than 500 feet from a synagogue on Yom Kippur.) 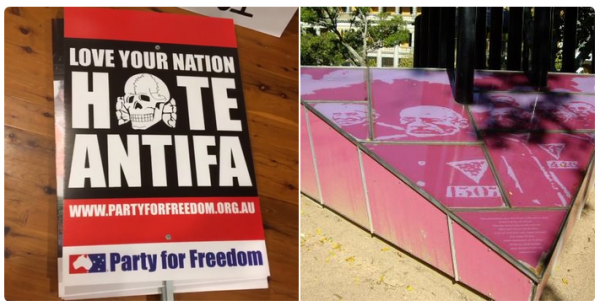 For those of you coming in late, the PFF developed as a split from the Australian Protectionist Party — itself created as a split from the Australia First Party — in mid-2012, following the APP leadership’s rejection of the Sydney branch’s organisation of a public rally demanding that the Australian government ‘Torpedo the Boats’ carrying asylum seekers to Australia. The unregistered micro-party has a history of organising publicity stunts. In April 2016 its members disrupted a church service in Gosford on account of the Gosford Anglicans’ support for human rights, while in December 2015 the party celebrated the 10th anniversary of the Cronulla pogrom. Most recently, members of the party, along with a handful of others including Neil Erikson, disrupted a meeting of Yarra council in Melbourne in order to protest its decision to cancel celebrations of Australia Day on January 26. Martin Fletcher, the (former) Vice Chairman of the PFF and its IT Guy, once made the video game ‘Muslim Massacre’ available on his now-defunct website: the aim of the game is to kill all Muslims that appear on the screen. Prior to this, his site was used to promote anti-Semitism and Holocaust denial and carried neo-Nazi propaganda.

Among the few dozen who’ve indicated that they’ll be joining Nick Folkes and fellow PFF members Toby Cook, George Jameson and Penny Louise/Tridgell at the hate rally are Sukith Fernando and Simeon Boikov. Sukith is a Tory student activist at the University of Sydney, a contributor to The Spectator (Australia), a Holocaust denialist, and a bit of a Hitler fanboy. (He also got into a spot of bother last week for these views.) Simeon, on the other hand, is a Putin fanboy, a Cossack, and a close ally of both the local branch of the neo-Nazi Golden Dawn and the Australia First Party.

… it is important to be aware that Party for Freedom are a fascist organisation with a long record of campaigning against sexual and ethnic minority groups – including refugees – and in support of reintroducing the ‘White Australia’ policy … [The PFF are also] growing more brazen in their willingness to display fascist, Nazi, and white nationalist symbolism. In the wake of the events in Charlottesville, Virginia last month, and the emboldening of the US far-right under Trump, it is imperative, now more than ever, to put an unequivocal check on the transnational growth of fascist (and) homophobic movements.

The willingness of the PFF to more openly espouse fascist and White supremacist ideology should also be considered in terms of its re-incorporation of the remnant members of neo-Nazi grouplet ‘Squadron 88’, who attended PFF rallies in Newtown and Lithgow in July. To date, S88 is best-known for shoving shitty anti-Semitic tracts into the letterboxes of folks (many Jewish) in Bondi in August 2014 and more recently for throwing up racist posters in Petersham in July 2017. 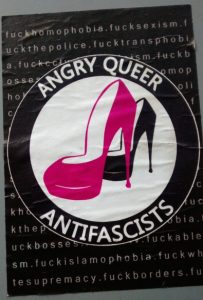