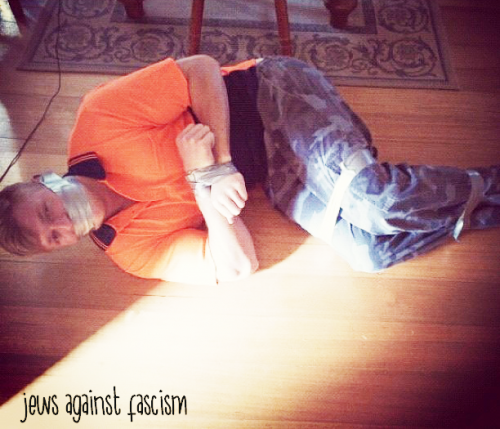 In a lulzy moment, those scallywags at Jews against fascism have stumbledupon an image of neo-Nazi Blair Cottrell trussed up like the fascist turkey he is. Not everybody finds the image amusing, however, including Blair’s father, Brian: 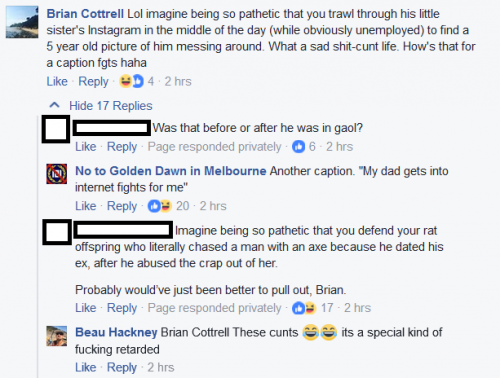 Brian also apparently doesn’t like Jews any more than his son does — but that comment went down as quickly as it went up.

The apple doesn’t fall far from the tree eh?

Speaking of anti-Semites, The Daily Caller columnist David Hilton (‘Moses Apostaticus’) is featured in an article on the OHPI site titled ‘The far-right trolls’ (September 11, 2017). And speaking of The Daily Caller: The Daily Caller Removes ‘Unite the Right’ Organizer Jason Kessler’s Bylines From Web Site (Bethania Palma, snopes, August 14, 2017): ‘The conservative site has deleted articles by a white supremacist who organized the deadly rally in Charlottesville, Virginia.’

Also in September, Tory MP Nick Wakeling was revealed to be the brother of neo-Nazi and Cottrell and United Patriots Front fanboy Tim Wakeling. According to the Herald Sun (Liberal MP Nick Wakeling rejects brother’s extremist Facebook views, Anthony Galloway, September 10, 2017), Nick has no desire to join his brother in dreaming of the mass killing of Jews at Auschwitz. In the meantime, Tim’s younger kameraden have been distributing neo-Nazi propaganda at the University of Tasmania campus: Nazi attack on University of Tasmania campus condemned, Nick Clark, The Mercury, September 25, 2017.

• After being kicked off several different domains, the neo-Nazi website Daily Stormer has finally found a safe space in Iceland (Iceland authorities weighing options after neo-Nazi site registers there, Timothy B. Lee, Ars Technica, September 23, 2017);
• Shane Burley examines the fallout from Charlottesville on the US ‘altright’ in Disunite the Right: The Growing Divides in the Pepe Coalition (Political Research Associates, September 19, 2017), while Spencer Sunshine takes a look at the tiny ‘Mother Of All Rallies’ in Washington on September 16 and asks Was the Failed ‘Mother of All Rallies’ the Beginning of the End of Independent Trumpism? (Colorlines, September 20, 2017);
• Hope Note Hate has published an extensive report on ‘The International Alternative Right’. It charts the movement’s origins, development, key events and figures and includes an analysis of the experiences of a young Swede who went undercover among their circles for a year. It’s highly-recommended reading;
• Finally, anti-fascists in Athens are featured in a report on Al Jazeera (Punching back: Greek gym trains for anti-fascist action, September 19, 2017), while in truthout Sarah Jaffe interviews author Mark Bray about Anti-Fascist Self-Defense: From Mussolini’s Italy to Trump’s America (September 13, 2017). 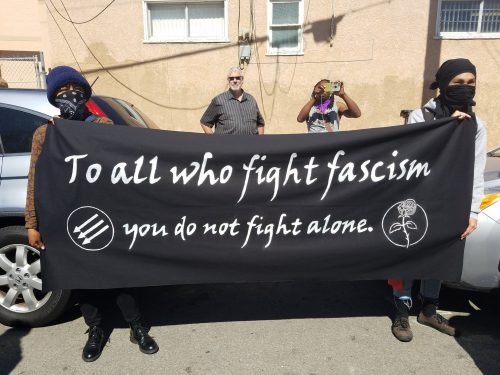