In a BiZaRR0 interview with news dot com dot au, local comic Shayne Hunter has announced his retirement as CEO of ANTIFA (‘I established a terror movement in Australia, and I quit’, Shayne Hunter, as told to Corrine Barraclough, news.com.au, October 24, 2017: ‘SHAYNE Hunter established the far-left and violent Antifa movement in Australia. After four years the Brisbane man quit. Here’s why.’).

It’s kinda barmy but presumably folks in Brisbane and Sydney who’ve had dealings with Shayne will respond in time.

[EDIT : The following statement is being shared by anti-fascist groups in Australia:]

news.com.au has recently published an article by right-wing writer Corrine Barraclough, interviewing the self-described founder of the “Antifa” movement in Australia.

It goes without saying that anti-fascist movements have existed in this country for many, many decades previous to this person’s involvement in “far-Left” politics, and that their account of their own participation is delusional.

In reality, after being excluded from numerous leftist spaces in Australia due to his erratic behaviour and a history of sexual assault, we have seen this individual move towards a right-wing politics; one which better suits his hateful narratives about gender-diverse people, people of colour, and women.

Our advice to comrades would be to avoid this individual. Our advice to the media would be to apply even the smallest grain of salt when reporting on fantastical claims. Anybody with a genuine interest in the origins and history of anti-fascism would be advised to consult Mark Bray’s Antifa: The Anti-Fascist Handbook (Melbourne University Press, 2017). 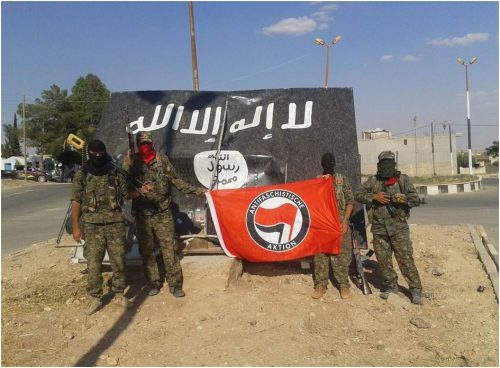 On this month’s episode of ‘Floating Anarchy’ on The SUWA Show (5.30pm, Friday, October 27, 2017, livestreaming on 3CR///855AM), Dr Cam and I will be talking to Peter D, the individual recently d0xxed by Brisbane altright figure David Hilton (‘Moses Apostaticus’) and falsely claimed to be the author of my blog …