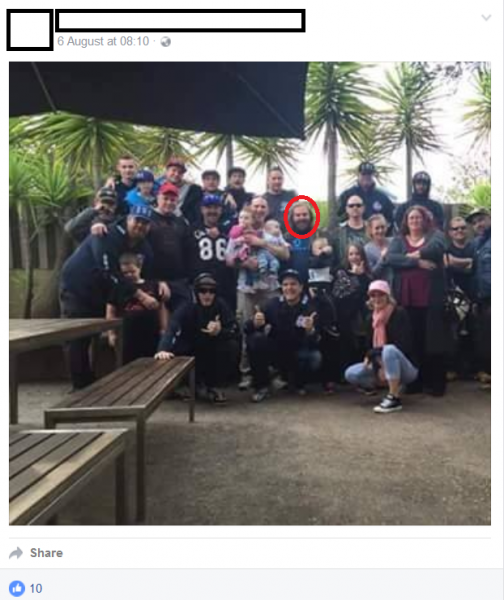 That said, having been arrested and charged with terrorism offences in August 2015, there wasn’t much news, apart perhaps from the fact that police allege that Galea was planning on blowing up the Resistance Centre (Socialist Alliance) in the CBD and the Melbourne Anarchist Club in Northcote (!).

Magistrate Charlie Rozencwajg heard Mr Galea tried to get a contact — now a prosecution witness — to buy fertiliser, and that he had adopted the Anarchists Cookbook to become a “patriots cookbook”, which he planned to distribute.

“There’s a bit of irony, isn’t it, in that he’s against anarchists,” Mr Rozencwajg said.

According to Kieran Bennett, who also attended the hearing, the bulk of the police case appears to rely on telephone intercepts, however the case also involves the testimony of witnesses; Galea’s next court dates are in April and May.

Galea has been linked to a range of ‘patriot’ groups. He was an admin on the Reclaim Australia Melbourne page, supported and attended Reclaim rallies as well as established the RA Media website and Facebook page. (The site’s “International Allies” are Breitbart, Britain First, Knights Templar International, PEGIDA and UKIP.) He was also closely associated with the United Patriots Front, True Blue Crew and Patriots Defence League of Australia and has even been linked to neo-Nazi groupuscule ‘Combat 18’.

Of course, Galea reserved his biggest props for the TBC, and was terribly excited by their activities, especially when they organised an anti-leftist rally in Coburg in May. A handful of TBC gronks were arrested and charged with various minor offences as a result of their brave, racist expedition and this week one, Nicholas Edward Abbott, got a slap on the wrist for being naughty; another TBC-aligned meathead, Mathew Wingrave, has also been reprimanded by The Law.

Since their last anti-Muslim rally in Melton in August (where the TBC methgoblins got into a shouting match with the ‘Soldiers Of Odin’) and a previous flagwit rally in Melbourne in June (one of Galea’s last public appearances), the wheels seem to have fallen off the TBC hate bus, with at least three of its members, including its leader, Kane Miller, being either convicted or accused of domestic violence and, in Miller’s case, ‘financial impropriety’ (ie, running off with his supporter’s money). But whether or not the boys resurrect themselves as the ‘True Blue Crew’, capitulate to Blair Cottrell’s Führerprinzip, or create some other motley assortment of thugs, it’s highly likely that they’ll continue fighting the menace of the Islamic State from the safety of their keyboards.

Speaking of violence against women …

On Friday, December 16, a Muslim woman was allegedly assaulted by a man in Perth. I reported the story on my Facebook page — it engendered a typical response of disgust but also derision — and it was subsequently noted by Islamophobia Register in a media release on December 18. Subsequently, various media picked up the story and the woman who was allegedly assaulted appeared on television providing her account of events. See : Woman attacked outside Perth supermarket, 9 News (AAP), December 18, 2016; Woman called ‘f***ing Muslim’ during Beeliar shopping centre attack: anti-discrimination group, Courtney Bembridge, ABC, December 19, 2016; ‘Why should I be ashamed?’: Muslim woman stands up to Christmas bully, Jessica Page, Yahoo7, December 19, 2016; Muslim woman attacked with broken bottle after saying ‘happy holidays’ instead of ‘merry Christmas’, Peter Walker, The Independent, December 19, 2016.

In which context, two things: 1) NEVER READ THE COMMENTS; 2) I understand that police will be releasing images of the man captured on CCTV.

Finally, and briefly, Blair Cottrell (United Patriots Front), Neil Erikson (‘Australian Settlers Rebellion’) and Chris Shortis (Australia First Party) are due in court in March next year to face charges of racial and religious vilification (inter alia) as a result of their media stunt in Bendigo in October last year. In connection with the case, for some reason — the charges were laid several months ago — Cottrell appeared on Ten News last week (December 15):

The lying neo-Nazi’s appearance resulted in more likes for the UPF Facebook page and presumably further donations towards the fuehrer’s legal defence. In the meantime, Shortis — who recently had his gun licence revoked — is appealing for funds via the Australia First Party while Erikson has declared that, presumably in an attempt to provide some comic relief, he’ll be representing himself in court. Sadly, Shermon Burgess, the other half of ASR, has received a letter from Sutherland Shire Council claiming $170,287.58 in costs incurred following the legal battle over the Cronulla Riot Re-enactment of last year.