Christopher Shortis : “No guns for you!” 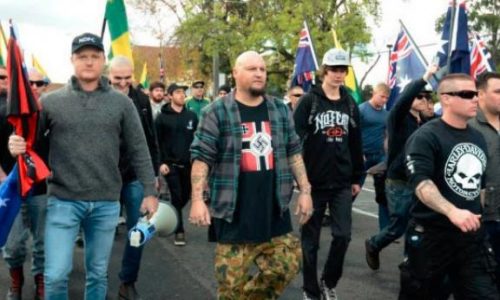 Above : Chris Shortis (L) marching alongside other fascists (including man in swastika t-shirt, neo-Nazi Glenn Anderson) on May 31, 2015 in Richmond. This was the public debut of the UPF.

Former United Patriots Front (UPF) turned Australia First Party (AFP) member Chris ‘The United Nations is attempting [to] install the Pope as leader of a new world government!’ Shortis has had his gun licence taken away.

As I see it, this is not a surprising decision, given both Shortis’s public pronouncements and the need for the courts to sustain the police’s ability to intervene in such circumstances … but in any case, Shortis is due (back) in court on March 6 next year to face (criminal) charges, inter alia, of religious vilification. Joining him will be UPF fuehrer Blair ‘A picture of Adolf Hitler in every Australian classroom!’ Cottrell and ex-UPF member Neil ‘Give me the money Jew or else I will get you!’ Erikson. The case is one of very few (that I’m aware of) in which individuals have been charged with a criminal offence under the Act and it seems likely there’ll be a protest outside the court in support of the three men charged, as well as some kinda political campaign in support of the trio. It’ll be especially interesting to see whether or not trollumnists like BoltA jump on board the bandwagon …

A SPORTING shooter and would-be politician who was part of an anti-Muslim group which beheaded a mannequin in Bendigo has been stripped of his guns.

Christopher Shortis argues he is a law-abiding citizen who has held firearms licences for years without incident.

Mr Shortis told the Victorian Civil and Administrative Tribunal that he was a responsible firearms owner and gun club member who had done no more than express his religious and political views concerning Islam and Muslims in Australia.

Mr Shortis says when concerns were raised about videos he had published online, he removed them from the internet.

But VCAT Senior Member Ian Proctor agreed with police that Mr Shortis was no longer a fit and proper person to hold a firearms licence.

The committee ruled in Mr Shortis’ favour and Victoria Police then appealed to VCAT.

VCAT heard Mr Shortis claimed to be a Seventh-Day Adventist, a member of the Australia First political party and hoped to run for the Senate.

[Shortis left the UPF to join the AFP earlier this year. He had originally hoped to run for a Senate seat with ‘Fortitude’, the stillborn party of the UPF. His religious views are detailed on his website, SOSMINISTRIESREV1412, and YT channel. According to Shortis, ‘This world is to be judged and we are living in the last days, and God is calling us to repent and be saved and follow his commandments.’]

Ms Shortis has held gun licences for many years without incident and holds a Range Safety Officer accreditation with the Northern Districts Pistol Club.

In April last year he posted an image of a forbidding figure in medieval Crusader armour overlaid with the words: “In the Classic Battle between Good and Evil! God’s Will be Done! This time, … …Will be the last! And by GOD!, … We will finish! What you started! NO! Submission To Islam!”

Six months later Mr Shortis was part of a small group which beheaded the manikin near the Bendigo City council offices.

Mr Shortis, who was been charged in relation to this incident with a court date set for next year, said the act was a political statement concerning the growth of Islam in Australia.

VCAT heard that media described Mr Shortis as a central figure in the anti-Islam United Patriotic [sic] Front with a history of posting videos of himself posing with weapons and threatening to take up arms against the government and Muslims. His posts were likened to material published by Anders Brevic [sic], the extremist who killed 77 people in Sweden in 2011.

In one video, Mr Shortis stands in a small study at his home and uses one of his long arm firearms as a prop with some cartridges behind him.

His videos describe weapons as tools that have provided liberty against tyrants and anticipates using his weapon for self-defence when the enforcement of tyranny begins. They also talk of the Bible prophesying the creation of a one world government before Christ returns and the need to defeat Islam by war, saying “We’ll end up fighting them one way or another, but we should be doing it with absolute brutality,” and drawing comparisons with nuclear weapons in Japan and wiping out the German army in World War II.

In one video he describes the weapons he and his partner would take into the bush in a “s*** hits the fan scenario”, which he says is a “when not if prospect”. Mr Shortis confirmed his belief the world is in “end times” but claimed he was speaking of a time that he hoped he would never see — an Armageddon when law and order had broken down.

He told VCAT he wants to address issues through political change, not violence and said found it disturbing to be characterised as some sort of “Christian nutter” and have his conduct compared with that of Anders Brevik.

Mr Proctor said on the evidence presented there was no basis to draw parallels between Mr Shortis and Brevik but he still concluded Mr Shortis was no longer a fit and proper person to hold firearms licences.

He rejected Mr Shortis’ claim that denying him a gun licence breached his right to express opinions on political and governmental matters.

Mr Proctor found reasonable members of the community may fear what will happen if Mr Shortis flees to the wilderness with guns believing he needs to act in self-defence or decided it had reached the point where the Muslim community must be responded to with “absolute brutality”.

He said Mr Shortis’ conduct in posting his views that he and others are at war with Islam and viewers should prepare for that conflict risked inciting violence and was not the conduct of a person who is fit and proper to hold firearms licences.

And while Mr Shortis had appeared a polite, intelligent, articulate man, who expressed his views with force but not inappropriately, Mr Proctor said he was “not confident I met the ‘real’ Mr Shortis”.

I live in Melbourne, Australia. I like anarchy. I don't like nazis. I enjoy eating pizza and drinking beer. I barrack for the greatest football team on Earth: Collingwood Magpies. The 2021 premiership's a cakewalk for the good old Collingwood.
View all posts by @ndy →
This entry was posted in !nataS, Anti-fascism, Media, State / Politics, War on Terror and tagged Australia First Party, Blair Cottrell, Chris Shortis, Christopher Shortis, Fortitude, Neil Erikson, SOSMINISTRIESREV1412, United Patriots Front. Bookmark the permalink.

2 Responses to Christopher Shortis : “No guns for you!”